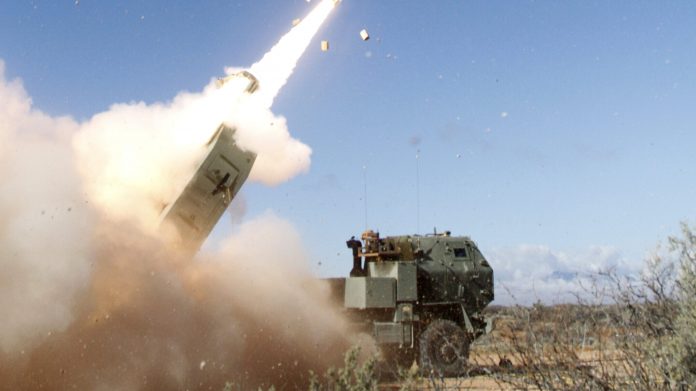 WARSAW: In a move that caught many by surprise, Poland announced late last month that it has begun the process of acquiring 500 of a US-made long-range weapons system known as the High Mobility Artillery Rocket Systems, or HIMARS, capping off a May military modernization splurge that also announced plans to procure more Patriot missile defense systems.

Poland’s Minister of National Defence Mariusz Błaszczak announced the move in a May 26 tweet, stating he had signed a Letter of Request inquiry into buying “about” 500 M142 HIMARS launchers, which would include a “high level of Polonization” of the equipment and its integration into Warsaw’s combat management system. Lt. Col. Krzysztof Płatek, a spokesman for the Armaments Agency, added that technology transfer would go into a Polish domestic effort known as HOMAR, and, intriguingly, that “we also want to obtain the technology of a selected missile” as part of the deal.

HIMARS has been in the news lately, with Ukraine having finally secured four batteries for its war against Russia. According to multiple American outlets, Washington had been hesitant to approve the sale over concerns Ukraine could use the weapon to attack inside of Russia. Colin Kahl, Undersecretary of Defense for Policy, said last week that it will take about three weeks for Ukrainian forces to be trained on the system, adding that the Ukranians had pledged not to use the weapons to attack Russian territory.

While Poland’s desire for HIMARS was known, Błaszczak’s statement begins the formal statement of interest from Warsaw. The expectation is that Poland’s government will move quickly to try and secure a contract for the weapon, although the timeline will depend heavily on how Washington reacts.

The announcement was unexpected, in part because only two days earlier, during an opening speech of the Defence24 Day industrial conference, Błaszczak announced the start of the continuation of the Wisła Phase 2 program. Wisla is the Polish name for the Patriot system, produced by American firm Raytheon.

“I have already signed a Letter of Request to acquire 3 squadrons (6 batteries) of Patriot, 360 degree radars (LTAMDS), launchers and missiles, together with the training and logistics package,” Błaszczak stated.

According to official statement from Poland’s Armaments Agency, in 2023 it is expected to conclude negotiations over a Foreign Military Sales agreement for the Patriot equipment, which will be combined with the conclusion of an offset agreement, as well as a number of contracts with the Polish industry.

Under the offset agreement, the US will transfer to Poland technologies associated with the LTAMDS radar and C2 system. Similar to Wisła Phase 1, whose delivery is planned to start this year, Polish defense industry will be responsible for delivery of the P-18PL early detection radars use an active electronically scanned array (azimuthally and in the elevation plane, despite the rotating base of the antenna) as well as Passive Location System, which combines two passive subsystems: PCL (Passive Coherent Location) and PET (Passive Emitter Tracking).

In Wisła Phase 2, the industrial cooperation will be continued, and Polish industry will be responsible for the production and delivery of the M903 launcher, PAC-3 MSE rocket components and the logistics security components of the Patriot/IBCS system. The first two batteries of the Wisła Phase 2 will be delivered in 2026, and the completion of deliveries is planned in 2028.

“Global interest in LTAMDS has been strong and Poland has made a significant first step toward becoming one of the first international customers,” said Tom Laliberty, president of Land Warfare & Air Defense at Raytheon Missiles & Defense. “Not only will LTAMDS bring an exceptional capability to detect complex and evolving threats to our allied nations, but expansion of our customer base will also offer the benefits of commonality and cost savings as well.”

According to Raytheon, progress on the US Army LTAMDS program continues, with the first radar having arrived the Army’s White Sands Missile Range. Five other radar systems are set to be delivered to US military test sites this year.

The surge of spending is occurring against the backdrop of the Ukraine invasion, something Błaszczak openly acknowledged in his comments.

“We also draw conclusions from the war in Ukraine. Its observation confirmed us in the belief that the Polish army must be able to deter [the enemy] based on its own defensive potential and independent defense of our country,” Błaszczak said in his speech.

According to Błaszczak, a new definitive document, known as Model 2035, will be released “soon” that will call for the sustainable development in all domains: land, air, sea, cyber, space and active expansion of territorial defense forces.

But many analysts doubt Poland can afford huge defense spending. In the last few years Warsaw decided to acquire a lot of US weapon — Patriot (for over 80 bln zlotys), HIMARS (for over 60 bln zlotys), M1A2 tanks (for over 21 bln zlotys) and F-35 multirole fighters for about 20 bln zlotys. And there are also others military programs, like Narew SHORAD systems, Miecznik frigates, Kruk attack and Perkoz and multirole helicopters, which also must be concluded and financed.

During his speech Błaszczak addressed the Act on Homeland Defense, which will enable increasing the defense budget to 3% of GDP. “Thanks to increased funds, we will be able to successively equip the Polish army with the best armament produced by both the Polish arms industry and our allies,” he said.

The Act on Homeland Defense is a new legal standard which officially entered into force on April 23. (Initially it was to enter into force on July 1, but due to Russia’s invasion of Ukraine, the Sejm moved the timeline up). It replaced several previous legal statutes, including the act of November 21, 1967 on the universal obligation to defend the Republic of Poland.

Several weeks ago Błaszczak and Beata Daszyńska-Muzyczka, President of the Management Bard Bank Gospodarstwa Krajowego (BGK), signed an agreement on the creation of the National Armed Forces Support Fund, one of the new solutions for financing the Polish Army, resulting from the Act on the Defense of the Homeland. The establishment of the fund opens new possibilities of obtaining finances to modernize the Polish Armed Forces, such as issuing bonds. Through this instrument it will be possible to buy modern technologies and military equipment both in Poland and abroad. The fund will also be able to use other sources, such as revenues from tax securities, payments or donations, or funds from the budget transferred by the Minister of National Defense.

Of course, spending more money would not work out if it doesn’t get Warsaw any real capability, and Poland has a long history of programs not coming to fruition. In his speech, Błaszczak addressed this issue, pointing to recent reforms for the Polish Army’s acquisition system.

“Thanks to the Council for Technical Modernization (Rada Modernizacji Technicznej) and the Armaments Agency (Agencja Uzbrojenia) functioning since January this year, we have shortened the decision-making process, [and] without statutory changes, based solely on internal documents, we introduced regulations that significantly accelerated the process of acquiring military equipment”, he said.

Stating that “the effects of reform can be seen immediately” Błaszczak recalled a recently signed contract for the supply of four battery modules of Gladius unmanned reconnaissance and attack system, including of a number of vehicles with command and control and logistic tasks and also include the mobile ground station as well as a set of BSP-U Gladius loitering munition with associated launching equipment. “Another examples are contracts for the supply of first two Narew SHORAD system batteries and 100 mini-UAVs (25 sets) codenamed Viewfinder (Wizjer) for ISTAR and IMINT for Army and Special Forces,” he said.