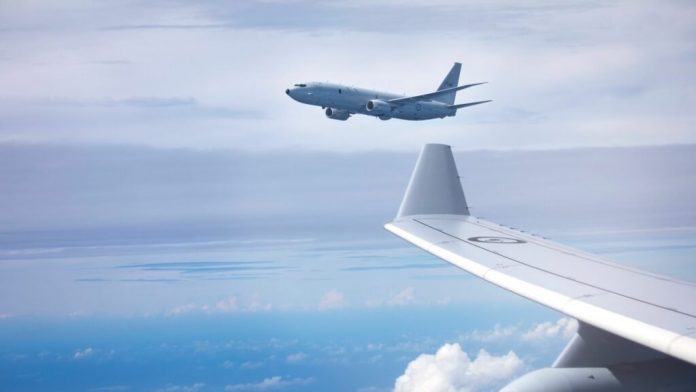 SYDNEY: China, clearly hoping that a change of government here would make Australia more malleable, must be gnashing its collective teeth in the wake of a sharp Aussie backlash to a “dangerous” incident over the South China Sea.

The incident in question happened nearly two weeks ago when a Chinese fighter jet flew close to an Australian P-8 sub hunter and released chaff, some of which was sucked into the big and relatively slow aircraft’s engines. At the time, neither China nor Australia spoke publicly about the dust up.

But then on Sunday, the Australian Defense Ministry issued a statement detailing the incident. That was followed by a formal diplomatic protest, which the Australian Labor Party government made public. It wasn’t just through a press release; Prime Minister Anthony Albanese spoke about it.

And today, Albanese made sharper remarks, saying Australia regards “the actions of China in this area as being an act of aggression and a dangerous act against the Australian airforce which was conducting aerial surveillance in accordance with international norms.”

“We urge Australia to respect China’s national security interests and major concerns, and to be cautious with its words and deeds so as to avoid a miscalculation that could cause serious consequences (emphasis added),” Foreign Ministry spokesperson Zhao Lijian said. The Chinese pilot acted safely and in compliance with international law, he said.

“The J-16 then accelerated and cut across the nose of the P-8, settling in front of the P-8 at very close distance,” he said. Then it released chaff, some of which was invested by the P-8s engines.

Marles said Australia would not be put off from mounting Freedom of Navigation operations over, on and under the South China Sea.

“This incident will not deter Australia from continuing to engage in these activities which are within our rights at international law, to ensure that there is freedom of navigation in the South China Sea because that is fundamentally in our nation’s interests.” Richard Marles said Sunday.

This latest incident follow another in mid-February when China painted an Australian P-8 with what was described as a military grade laser, an act the then Prime Minister Scott Morrison and his defense minister, Peter Dutton, sharply condemned. That reaction was not unexpected as the Morrison government had sharply, loudly and persistently criticized Chinese actions — which included the fairly amazing release by the Chinese acting ambassador to a member of the Australian media of a “grievance list” of 14 things Australia did that China didn’t like.

So the P-8 incident was the Labor government’s first real test to see if it would, as the Morrison said it might, treat China gently, not understanding the threat posed by the Chinese Communist Party to the liberal international order.

It also came as several Australian news outlets reported comments from Papua New Guinea by Chinese Foreign Minister Wang at the end his Pacific tour, during which China tried and failed to get the Pacific islands nations to agree to a Chinese statement committing all of them to increased cooperation with the PRC.

The Sydney Morning Herald story says that “Wang said a reset in the China-Australia relationship would require concrete action, adding ties with Australia had ‘run into difficulties in recent years.’”

Wang also issued a statement that seemed to indicate China wants the Albanese government to return to managing Chinese relations as they were handled before China went on the offensive around the Pacific, illegally claiming huge swaths of the South China Sea, destroying pristine coral reefs to make military bases and regularly trying to intimidate its neighbors who claimed waters and islands that China wants.

“The crux of the difficulties in China–Australia relations in the past few years is that some political force in Australia insists on viewing China as a rival rather than a partner and framing China’s development as a threat rather than an opportunity,” Wang said.

“This has led to a significant retrogression of the many-year positive and pragmatic China policy by Australia. The solution is looking at China and China–Australia relations in a sensible and positive way, uphold mutual respect, seek common ground while shelving differences, and create the necessary conditions for bringing bilateral relations back on the normal track.”

Albanese indicated before his party won the election — and since its victory — that Australia is unlikely to treat China as a “partner” unless it substantially changes its behavior.

Australia’s foreign minister, Sen. Penny Wong, rushed to the Pacific island states while Wang toured many of them. At one point Wong showed up in Tonga the day after her Chinese counterpart departed. Wong was clearly hoping to both send a clear message to the islands that Australia cares, will rebuild and bolster its relations with them and should read China with a gimlet eye.

All told, Wang’s unprecedented trip, took him to the Solomon Islands, where he signed the secret security pact, and Tonga. He also visited Kiribati, Samoa, Fiji, Vanuatu, Papua New Guinea and Timor-Leste.

This has been quite a busy week for the Albanese government’s foreign policy, with the prime minister paying his first bilateral visit today to another country, Indonesia. At the invitation of Indonesia’s president, Joko Widoko, he rode a sleek bamboo bike made in Indonesia around the presidential compound. Presumably, it was a demonstration of Indonesia’s indigenous manufacturing capabilities, of which the populace and its politicians are very proud, and the country’s new sustainability initiative. Australian prime ministers traditionally pay their first visit to Indonesia, with which Australia has had a sometimes turbulent but also very close relationship. On top of that, as Albanese noted today, Indonesia is poised to become the world’s fifth largest economy.

Media Touts Success of Gas for Guns ‘Buyback’ in Sacramento

Inflation Will Price Many Americans Into Homelessness, by Brandon Smith