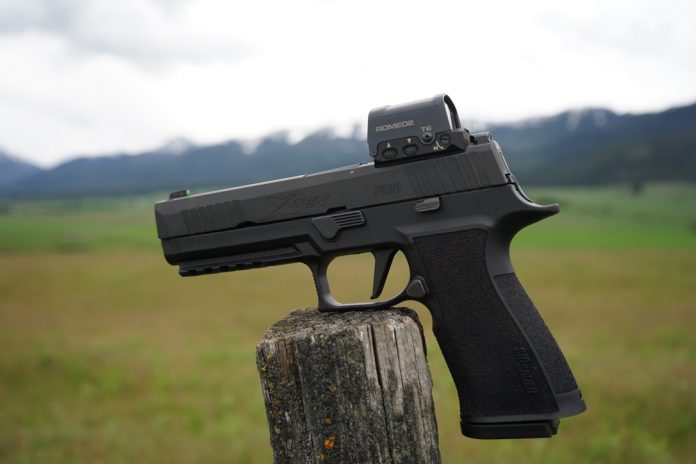 Wyoming, September 2021. Sam Kezar drew a non-resident archery elk permit after years of application. The area is known to have a growing population of grizzly bears and Sam wanted a means of self-defense in case he had an encounter. He purchased a 10mm handgun and two boxes of ammo. He’d have bought more but due to the shortages we have all experienced, these were the only 10mm he could find. He shot enough rounds to know the gun was sighted in and spent time practicing his draw and dry firing. The time he dedicated to practicing turned out to be a good investment.

During his hunt as he and a friend headed towards a new basin looking for bugling elk, they heard a noise and looked up the hill to see a grizzly running towards them. Sam’s buddy drew a can of bear spray and Sam drew his 10mm. They started firing at about the same time. The bear spray traveled towards the bear a short distance and stopped as if it hit a wall, the wind was in their face. The 10mm bullets didn’t care about the wind. Sam continued firing as he fell over backwards and the bear veered off, went down the hill, and stopped. The two hunters backed out, leaving a bow and some of their gear where they had dropped, and went to a place where they could call a game warden. When they returned the next day they found the bear dead.

Oregon, August 2021. While blood trailing an elk for one of my clients I looked up to see ravens circling a short distance away. I investigated, hoping the birds had found the bull. As I closed the distance I smelled old rotten death. I knew this must be something other than the bull we had hit that morning but decided to find out anyway. As I worked into the wind a black bear emerged from the brush at about 30 yards, pinned its ears flat against its skull, and charged. I drew my Sig P220 10mm hunter and fired twice when the bear was about 8 yards away, killing it. I almost didn’t bring my 10mm that day, the P220 is a big heavy pistol (45 ounces), and at that stage in the guide season I was way behind on sleep and my body begged my brain to carry less weight. After my nerves settled, I returned to the last blood on the elk, and later that day found the bull dead about 400 yards from where he’d been hit.

September, 2020, Kodiak Island. After four weeks of guiding archery elk hunters, I had traveled a couple thousand miles north to hunt mountain goats with the Sig Sauer Cross rifle chambered in 277 Sig Fury. Kodiak is the home of the largest bears in the world and for defense we had a secret weapon, literally. The engineers at Sig had been working on a polymer framed 10mm. The prototypes that made their way to Kodiak had 3d printed grip modules and magazines that were made from two different mags and welded together. The 3d printed plastic was slicker than a trout in the constant rain of Kodiak, so we applied some grip tape and headed to the range to confirm zero on the rifles and practice a bit with the pistols. These were the first functioning prototypes of what would become the P320-XTEN. While fly fishing between mountain goat hunts we saw a few bears, and one of our party startled a young boar that ran from the river into the brush just three paces away, but fortunately the pistol was not needed. That is the reality with pistols. You can carry one your whole life and never need it, but when you do need it, you need it desperately.

The 10mm is not my first choice cartridge for killing a bear, wolf, mountain lion, or any other predator which has decided to turn tooth and claw against me. If I had a rifle chambered in 10mm, I wouldn’t select it over my 277 to go hunting. When I spoke with a wildlife services officer (who deals with problem grizzlies more than just about anyone else in the country) about his bear defense gun he told me that you can’t beat a 12 gauge with slugs. When my step-dad guided in Canada he carried a 12 gauge that alternated slugs and buckshot with the idea being that buckshot might break the bear’s jaw and the slugs could break the rest of the bear. However, carrying a 12 gauge shotgun is impractical for most of us most of the time. That brings us back to the pistol, and if you want the 12 gauge of pistols, you want the 10mm.

The Sig Sauer P320-XTEN was released to the public the last week of May 2022. It has come a long way since I carried it on Kodiak, and there are some substantial improvements over the P220 10mm Hunter I’ve carried while guiding and hunting these last several years.

The XTEN is optics ready, meaning you can mount a sturdy red dot like the Romeo2 onto the slide. The Romeo2 has a titanium shroud and rear lens you can add, which waterproof and ruggedize the system. I recommend doing this. A single drop of rain, snowflake, or pine needle can block the emitter and prevent you from seeing the red dot. For my money, the Romeo2 is the only real choice for folks who carry out in the woods.

One of the first things that comes up when discussing handguns for predator defense is magazine capacity. I fired two rounds into my bear and might’ve had time for one more before it was on me. Sam fired 3 to 4 shots. A bear can run 35 mph. What that means to us is 17.1 yards per second. (A bear closed the distance about 60 yards while you read that last sentence.) When I am on my home pistol range and have had the correct amount of sleep and coffee, while ready, I can draw, fire, and hit a static 10” plate at 17 yards in 1.1 seconds, but I can’t do that every time. I am dragging you through the doldrums of this math exercise for you to understand that mag capacity very likely exceeds the amount of time you have to get the shots off. But you asked for more and Sig listened, because the XTEN ships with two beautiful 15-round magazines. With two full magazines if you fired one shot per second at a charging bear, your first round would be fired at 510 yards, and your last round at bad breath range.

The 10mm cartridge itself was created by USMC LtCol Jeff Cooper and was adopted by the FBI after they found that 9mm’s weren’t getting the job done and had lost some officers in the process. At the time, gun manufacturers weren’t able to slim down the grip of the pistols and folks with smaller hands struggled to hold the 10mm. Times have changed.

The XTEN features an XSeries stippled polymer grip module with excellent purchase whether your hands are wet or dry, and the grip circumference isn’t noticeably bigger than the other Xseries grips you may be used to.

The gun also ships with Xray-3 Day/Night sights in case you should need to know which way the gun is pointed in any light condition. I especially appreciate these sights in the early dawn and late dusk conditions we as hunters so often find ourselves in. If you are a co-witness type person, a suppressor height front sight will work with the integrated rear sight that comes with the Romeo2. The 5” bull barrel hits the sweet spot between shootability and convenient carry for a gun of this caliber, and it’s rated for hard cast lead bullets which are the preferred penetrators for big animals. Other popular firearm brands aren’t rated for those bullets. While at the Sig Academy I was able to consistently and consecutively hit a 12” target at 50 yards, even one-handed, with an audience. I’d like to stress very much that absolutely no one thinks I’m an expert pistol shooter. This is simply a gun that makes me better. The flat trigger with a 90-degree break definitely helps.

Also, the XTEN only weighs 33 ounces. That’s a big deal. I carried it OWB for two days on a construction job to see how it would interfere with heavy work. Besides getting asked by every red-blooded construction crewman on the job if that was the new Sig 10mm, I didn’t notice the gun even being there.

For those who share wild places with wild animals that occasionally decide they want to kill us, the P320-XTEN 10mm is an accurate, dependable, lightweight, and hard-hitting insurance policy that doesn’t mind the abuse that gets thrown at us while out there. The 10mm isn’t a 12 gauge, but I’m here to write about it because it works.

About the author:
James Nash is an outfitter, professional hunter and cattle rancher from NE Oregon where he resides as the fifth generation of his family to raise cattle, hunt, and fish on the 6 Ranch. He studied history at Adolf Øien Videregående in Trondheim, Norway where he also competed on the Norwegian National Greco-Roman wrestling team, then studied Literature and Writing at the University of Montana Western in Dillon, Montana. Afterwards, Nash served as an Armor Officer and platoon commander in the M1A1 Abrams main battle tank in the US Marine Corps for five years. Nash was wounded in Afghanistan and received two Purple Heart Medals and after a period of convalescence was subsequently retired. He returned to the 6 Ranch and resumed guiding and outfitting, with a focus on other combat wounded veterans. Nash has guided salt and freshwater fly and gear fishing, all kinds of hunting, and back country wilderness trips since age 14. He hosts the 6 Ranch Podcast, and you can learn more about him on instagram @6ranchoutfitters.

Why Don’t Either of the Guns on Elon Musk’s Nightstand Actually Work?