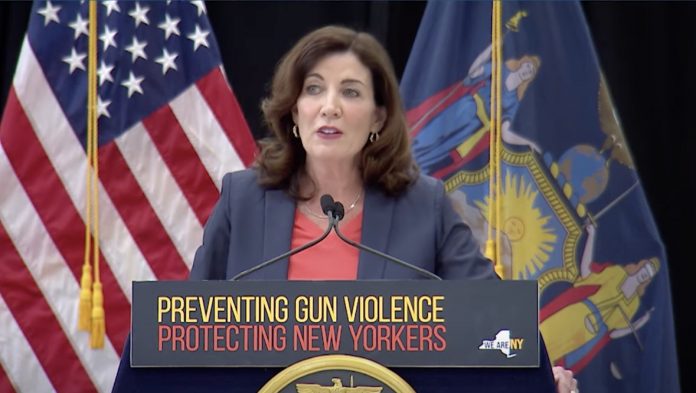 The legislation signed would do all of the following, and more:

“Gun violence is an epidemic that is tearing our country apart. Thoughts and prayers won’t fix this, but taking strong action will,” Gov. Hochul said at a Monday press conference.

“While we are taking expedient action to enhance New York State’s nation-leading gun laws, we recognize that gun violence is a nationwide problem,” she continued. “I once again urge Congress to follow our lead and take immediate action to pass meaningful gun violence prevention measures. Lives depend on it.”

Gun violence is a disease that is plaguing our country.

In New York, we act boldly and we lead.

Thank you to @AndreaSCousins, @CarlHeastie, and all the advocates for their work to quickly pass this transformative package of gun legislation that will protect all New Yorkers. pic.twitter.com/rr6AIjvOqJ

The National Shooting Sports Foundation, the firearms industry trade association, was quick to slam the governor for chilling the 2A rights of law-abiding citizens.

“NSSF is disappointed that New York’s legislature rammed through this package of gun control bills and Governor Hochul chose to sign them into law,” said Mark Oliva, NSSF’s Managing Director of Public Affairs, in an email to GunsAmerica.

“Adults at the age of 18 are fully-vested in their rights and this legislation is blatantly unconstitutional,” observed Oliva. “The U.S. Court of Appeals for the Ninth Circuit recently ruled that California’s similar age-based gun ban violated the Constitution.”

Another concern is the microstamping mandate, which is nothing more than a way to put a freeze on the sale of certain firearms, argues Oliva.

“The sole-source patent holder on this technology has admitted that it is unreliable and can be easily defeated,” noted Oliva. “California serves as another example of how microstamping technology isn’t workable. Since that state has required it, not a single semiautomatic handgun has been added to California’s roster of handguns approved for sale in the state. It is nothing short of a slow-rolling gun ban.”

While it’s unclear what effect, if any, these laws will have when it comes to stopping the next determined killer, what is clear is that the power of the surveillance state has been expanded and the right of the people to keep and bear arms, for traditionally lawful purposes like self-defense from the very killers these new laws are supposed to prevent, has been infringed.

In time, New Yorkers will have to look back and ask themselves, was it worth it?