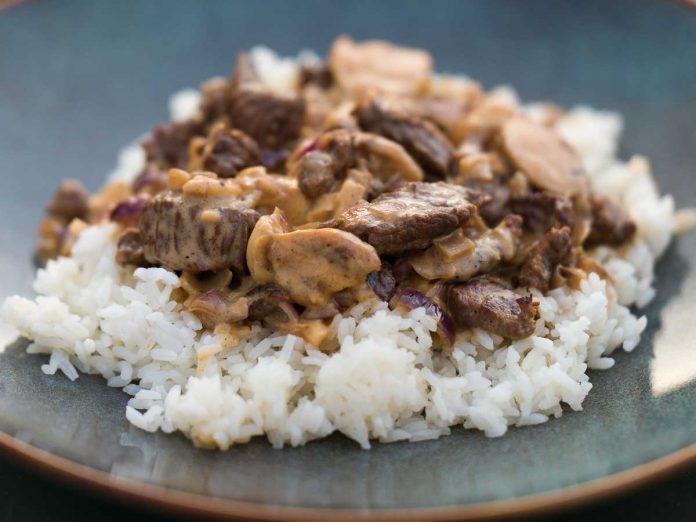 Stroganoff is credited as being a Russian dish, and I gotta believe making it with bear meat is more Russian than using beef. Plus, you gotta save the cows to make all the sour cream you’re going to need.

This recipe is seriously hearty and the perfect thing after a long day hunting. I was inspired after eating a Peak Refuel version of beef stroganoff while bear hunting. Its rich creamy sauce made me feel like I’d had a great day even though I didn’t even see any sign, let alone a bear.

You can make this with any game meat. A key idea is that the meat should be tender. You can use a good cut of meat, like backstraps, or you can tenderize the off-cuts. If you use good tender meat, you can cut it into cubes instead of slices. If you slice tough cuts thin and use this method for velveting the meat, it’ll be tender and tasty, too. Alternatively, you could also pressure cook the meat with stock.

Mushrooms are also a classic ingredient in stroganoff. This is a terrific time of year for foraging mushrooms while bear hunting. My kids and I found these puffballs this week while searching for an arrow I lost last season (which we also found). The great thing about puffballs is that they are easy to identify as edible.

Just cut the mushrooms in half. If they are homogenous and have the same texture throughout, then they are an edible variety. If they have gills, other differences inside, or color variation, then you should pass or use other means to identify them.

Puffballs have a mild flavor and are easy to use. Don’t wash them until you’re ready to eat them, and then using a soft brush — even a toothbrush — with cold water is a good way to get the dirt off. Wild mushrooms are generally more delicate than store-bought varieties, so don’t slice them too thinly.

Season the meat (I used Lowry’s) and brown the meat over high heat with the cooking oil, and do it in two or three batches, or else it will steam instead of browning. Do it for 30 seconds, then flip the meat and go for another 30 seconds. Don’t stir fry — just let it sit still and get truly brown — the crusties in the pan will make the sauce tastier. If you’re using bear meat, you’ll leave it to simmer longer in the sauce later to ensure it’s thoroughly cooked.

I used my 12″ Camp Chef skillet, but only because my 12″ dutch oven was still in the camp box. The dutch oven leaves more depth for more sauce (you can freeze it for future trips) and keeps the oil from splattering as much.

Remove the meat, reduce the heat to medium, add a tablespoon of butter and saute the onion for several minutes until browned.

Add the mushrooms to saute for a few minutes, and use more butter if necessary to keep the pan and food well-oiled.

Sprinkle the flour over the onions and mushrooms, then stir until it’s coated in butter. Add more butter if needed and saute for two more minutes.

Add the sour cream and stir until well blended. You’ll note that the cream melts in and mixes better after it warms. Blend well and stir frequently, and especially make sure to stir it off the bottom of the pan so it doesn’t scald and burn. If it does burn to the bottom, don’t scrape it because it’ll ruin the flavor of the rest. Just reduce the heat and leave that spot to clean off later.

Add the stock. You can reduce the cooking time in the pan by pre-heating the stock in the microwave while the onions are cooking. Bring it all back up to a boil and simmer for two more minutes.

Add the mustard, and stir the meat back in. If you’re using bear meat, let the meat cook thoroughly in the simmering sauce, but for other meats just leave it until it’s warmed so you don’t overcook the meat. Salt and pepper to taste (don’t do much because the meat is salty).

Serve over eggs noodles or rice or mashed potatoes or crusty bread. It’s creamy and delicious and even kids will love it.

If you use the dutch oven, it’s easy to double the recipe and freeze the leftovers in a ziplock bag to take camping during your elk hunt next fall. Be sure to use the bear bones to re-stock on…stock.

John Rigby & Co. has an eye on the future with the appointment of a new apprentice gunmaker