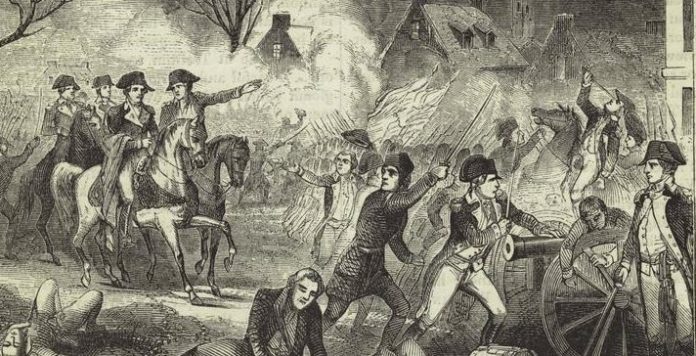 On June 8th, 1776, the forces of Canadian Governor Sir Guy Carleton defeated American Patriot forces under John Sullivan. After taking heavy losses and the loss of General Richard Montgomery at Quebec, the Patriots were pursued by Governor Carleton. Halfway between Quebec and Montreal, at the Trois-Rivieres, the Patriots turned to fight. The Redcoats and German mercenaries killed 25, wounded 140, and captured 236, but Carleton allowed the rest of the 2,500-man force to complete their retreat. This battle changed the priorities of the Patriots, and Colonel Benedict Arnold wrote, “Let us quit and secure our own country before it is too late.”

We are continuing our summer sale, at Elk Creek Company. We’ve reduced the prices on all of our percussion replica guns, and nearly all of our pre-1899 cartridge guns. With the recent dip in the spot price of silver, this is a great time to buy. Note that we have our prices listed in both pre-1965 silver coinage and in current rapidly-inflating Federal Reserve Notes (FRNs.) The last day of the sale will be Monday, June 20th. Our small inventory is selling rapidly, so order soon!

Today’s feature article was written by Brandon Smith and was first published by Birch Gold Group.

We are running low on entries to post for Round 101 of the SurvivalBlog non-fiction nonfiction writing contest. Please share your knowledge with the SurvivalBlog readership.  A 1,500+ word entry will qualify you for the judging to win some valuable and very useful prizes!

CNN Surprised By What We All Know: New Firearm Owners Are Heavily Liberal, Female, and Minority