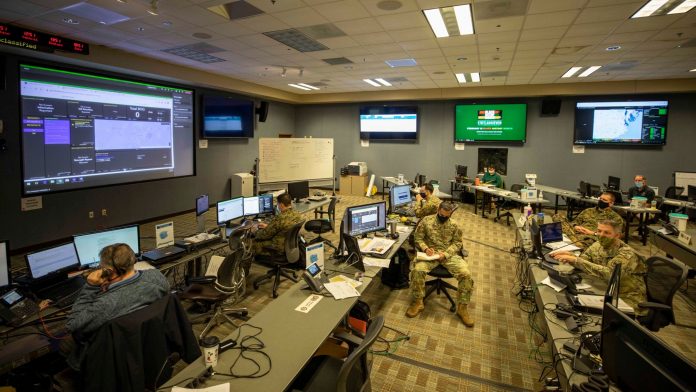 WASHINGTON: Concerned with the Pentagon’s progress on implementing it’s Joint All-Domain Command and Control concept — an effort to connect sensors to shooters across land, sea, air, space and cyberspace domains — lawmakers are directing the defense secretary to submit a report by the end of this year on exactly what capabilities will be delivered to warfighters and when.

In its mark of the fiscal 2023 defense authorization bill, released today, the House Armed Services Committee’s cyber, innovative technologies and information systems (CITI) subcommittee says that every military service has its own separate effort to address the JADC2 requirements concept and that it’s unclear how the efforts are progressing and how much they’ll cost.

In a briefing to reporters, HASC committee staff said the report will help the committee “fully understand the state of play and understand how to support these efforts.”

“JADC2 is a very complex undertaking… and there are a lot of pieces that all need to come together in order to create this capability that the department is depending on,” one staffer said. “The services have their specific efforts that may be succeeding or encountering challenges each on their own merits and they’re supposed to net together into this cohesive whole. So this is really towards alignment and supervision.”

There have been long-held concerns about the overall complexity of the Pentagon’s JADC2 efforts, including how it would weave in separate, siloed efforts currently underway in each major service. The Defense Department released a public version of its JADC2 strategy in March, but that left more questions than answers as to how the Joint Chiefs of Staff and the military services were going to accomplish the goals defined in the document.

In order to guide DoD with implementation of the strategy, that eight-page document defined “three guiding C2 [command and control] functions of ‘sense,’ ‘make sense,’ and ‘act,’ and an additional five enduring lines of effort (LOEs) to organize and guide actions to deliver materiel and non-materiel JADC2 capabilities.”

The HASC CITI subcommittee in its mark says that though the Pentagon has made progress on JADC2 planning, it’s still concerned with its progress on implementing the concept. The subcommittee wants a report on DoD’s JADC2 plans no later than Dec. 30.

Specifically, the report should include an inventory of JADC2-related development efforts with descriptions of performance objects, costs and schedules and a list of potential JADC2 capability gaps along with  how DoD plans to address and fund those gaps.

The subcommittee also directs the Government Accountability Office to conduct a review of DoD’s JADC2 efforts and provide a briefing by March 2023 on its preliminary findings. In addition to the review, the subcommittee also wants a GAO report on JADC2 efforts that includes an overview of the Pentagon’s current investment plans, schedules and cost estimates; an evaluation of its process for monitoring those costs; and an assessment of the department’s challenges in developing and implementing JADC2 efforts.

The subcommittee defines covered software as any software being developed that was acquired using a software pathway established under section 800 of the FY20 National Defense Authorization Act, a covered defense business system and a major defense acquisition program.

The subcommittee also wants DoD to conduct an independent study with a federally funded research and development center on the impacts and challenges associated with the use of software and information technology and provide a report on their findings.

The report should identify the most important software and IT challenges in DoD that result in lost working hours, a summary of the policy or technology challenges that limit the secretaries of each military department to implement needed reforms and provide recommendations to address challenges and improve the process of providing software and IT department-wide.

DoD “and the military services often have what we consider underperforming, poorly performing software and IT,” a committee staff said. “These service members are wasting an enormous amount of their time which is not spent training, it’s not spent thinking strategically, it’s not spent doing the things that we need them to do as a military because they’re literally starting, waiting at their computer for… their email to load, for one system to talk to another.”

According to a new DoD software modernization strategy, which was approved by Deputy Defense Secretary Kathleen Hicks in February, the Pentagon wants to turn its 29 software factories into one overarching department-wide software “ecosystem.”

In a briefing with reporters following the release of the strategy, defense officials said the centralized ecosystem would take advantage of investments made by each individual military service. The strategy also states one centralized software hub could help streamline control points for end-to-end software delivery and speed innovation into soldiers’ hands.