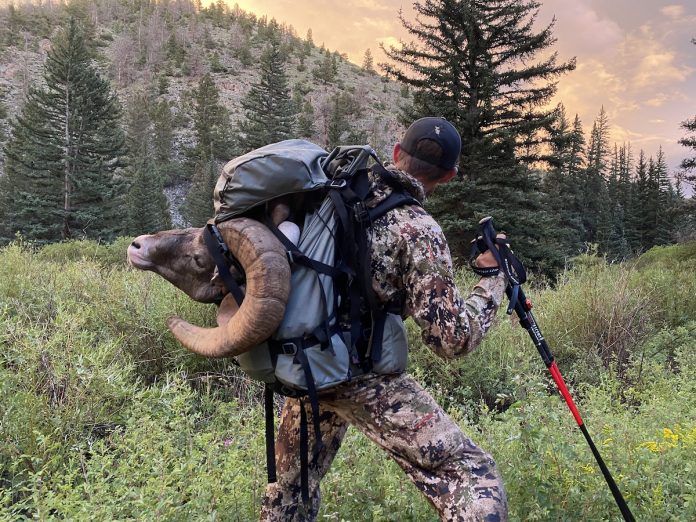 I figured it wasn’t real — a hoax — an ill-timed prank. After all, trophy tags, those we apply for and invest tons of money in each year only to get a “Thank you for applying, but…” letter, don’t exist. These tags are unicorns, the pot of gold at the end of the rainbow, right?

I thought so too.

As it turned out, though, the email was real, and after 19 years of applying, I’d drawn my once-in-a-lifetime Colorado Rocky Mountain Bighorn Sheep tag. I felt like Ricky Bobby in the Blockbuster hit Talladega Nights — I wasn’t sure what to do with my hands. After freaking out and calling everyone that would listen, I started the hunt.

No, I don’t mean I hunted out of season. What I mean is when you draw a coveted tag you’ve waited a lifetime for, the preparation starts the day you pull the tag.

Sometimes, after the initial excitement and shock leave the body, the mind gets nervous. Why? It’s natural. You’ve been dreaming about something, and now it’s here, and you’re going to have to make it happen. Here’s how to do just that.

You will feel pressure to be successful, and this is fine — natural — nothing wrong with it. However, some feel pressure to succeed to prove others wrong, impress their peers, gain Instagram followers, etc. These are unnecessary pressures, and they will take away from the pure joy of your hunt. People, even some you’d call close friends, will be jealous and hope, secretly, your tag goes unpunched. Some will make negative comments about the hunt, asking you questions like, “What if you miss? That will ruin your life after waiting all these years.”

Block out the noise. This tag is about fulfilling a dream, but you can’t let the hunt’s success/failure define you as a person. Get that in your head right now, and block out the haters.

We all have friends, but you want to find those closest to you — those pals that would lay down in traffic for you — and get them involved in the hunt. This may be from a planning perspective or joining you on the quest if they volunteer their time.

I had a remarkable crew on my bow hunt for bighorn sheep, and I couldn’t have punched that once-in-a-lifetime tag without them.

Finding other hunters who’ve had the tag in the past isn’t tricky. Some state game and fish organizations will provide their names and contact info, and even if that’s not the case, if a guy or gal is successful on a limited tag, that success is out there for the world to see. You just have to do some investigating.

I found one of the guys who had been successful in my sheep unit looking on Facebook. I was informed about another successful hunter in my area by a good friend from “my crew.” My buddy provided me with his phone number, I called him, and long story short, the hunter joined me on the hunt and has since become a lifelong friend.

Most hunters who’ve drawn a once-in-a-lifetime tag, or one they won’t draw again for another 10 or 12 years, are usually very forthcoming with information. It’s not like they’re giving you the spot and the coordinates to the place they hunt over-the-counter bull elk every year. Most want to help you be successful, and the intel you can glean and the friendships you can make by picking up the phone are priceless.

Check With The State

I bought a map that showed every sheep killed in my hunt unit from 2015 to 2020. In Colorado, when you check your sheep in with the Colorado Division of Wildlife, you must give a location. Many other states require something similar, and not just for bighorn sheep. This map proved to be an excellent tool for learning where other hunters found success and learning access points and the like.

In addition to my map purchase, I also spoke with the wildlife biologist in the area and got the scoop on the sheep herd, health, number of rams in the unit, trophy potential, etc. The more information you can learn about the unit, the better off you’ll be when it comes time to hunt.

Don’t be lazy! If this is a bow hunt, shoot your bow often and with purpose. I practiced every single day leading up to my hunt. I entered 3-D tournaments, bought a 3-D bighorn target, and confirmed my third-axis setting on my site by toting a foam cube target into the mountains lashed to my backpack. I would set the target at steep up and downhill angles and shoot it. It doesn’t matter what weapon you’re hunting with, be sure and practice with it often.

Also, don’t be lazy. If you know the hunt will be very physical, take the necessary steps to get in the best physical shape of your life. Getting in excellent physical shape hardens the mind, and will make you mentally tougher, which is a critical component when trying to keep your crap together when the moment of truth arrives.

I made four separate trips to my hunt unit and spent 16 days scouting before my actual hunt began. The first scouting trip wasn’t for putting eyes on sheep. Yes, this would be a bonus, but I wanted to learn access points — roads, trails, etc. — and check out multiple glassing locations that other hunters in the area had provided me. I wanted to drop pins on my Hunt Stand digital scouting app and learn the landscape.

Please don’t let the first time you arrive at your once-in-a-lifetime hunt locale be on the opening morning of your hunt. You are doing yourself an incredible disservice if you go about your hunt this way.

Nothing builds confidence like putting glass on trophy animals in the months and weeks that lead up to your hunt. Depending on the species you’re chasing, you may want to set trail cameras (if legal), but the point is, you need to do some boots-on-the-ground scouting. I found the ram I wanted to shoot on my second scouting trip — found him again on my third scouting trip — and again the day before my hunt began. On the third afternoon of my hunt, I killed that ram, a 170-plus inch public-land brute, but I’d been hunting him since the day I found out I drew the tag.

The more work you put in, the more you’ll get out of the hunt. The extra work won’t guarantee you a trophy, but it will make taking that trophy more possible. When your hunting mind calls on the most memorable moments from the hunt, they will be those moments spent glassing game with good buddies, hanging a trail cam over a well-used wallow, or late-night study sessions pouring over possible hunt locales on a map. Good luck, and get after it!

Canning Potatoes, by Patrice Lewis. I started with 15 lbs. of red potatoes.