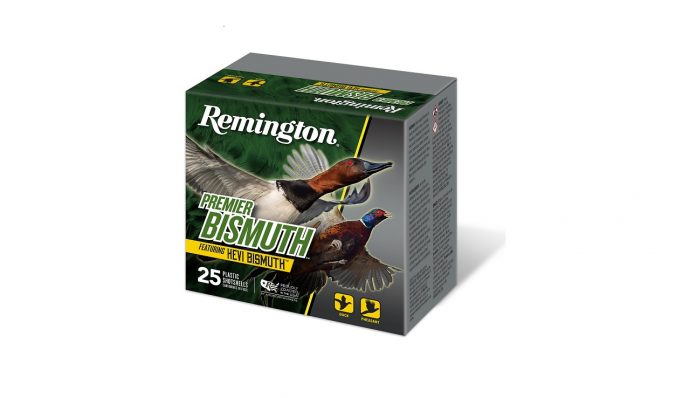 Regardless of the season, a heavy-hitting and long-range capable shotgun load is part of the key to success when it comes to waterfowl hunting. Whether you’re after early-season upland hunting in Montana or waterfowl hunting in south Louisianna, you’ll want a shotgun load that you’re both familiar with and performs well across a variety of locations. Remington has just announced the introduction of their new Premier Bismuth hunting loads which are both denser and feature more energy than comparable steel loads. These new loads are being introduced just in time for you to start patterning and practicing with them as we approach the early waterfowl season coming up in the fall. “Remington hunters demand the absolute best from our ammo, and we are really excited to offer Premier Bismuth for the 2022 hunting seasons,” said Joel Hodgdon, Remington’s Director of Marketing. “HEVI-BISMUTH has proven so valuable in the field. High-density and smaller shot sizes deliver more pellets per payload, giving shooters an added edge in the field, whether you are shooting ducks or downing upland game.

In total, there will be four 12-gauge varieties including two 3-inch shell options, three 20-gauge options, and one option each for 410 bore 28-gauge, and 16-gauge. This will give all hunters, regardless of the platform selected the option to use these new Premier Bismuth loads and will also give younger hunters or the recoil sensitive people access to a softer-shooting shotgun.

Remington’s new shotgun loads will start retailing at $60.99 per box of 25 cartridges and will top out at $74.99 for the more obscure 28-gauge and 16-gauge loadings. Just like Remington’s recent release of their Gun Club Cure ammunition, it should start showing up on store shelves for hunting season 2022 which should be just in time for you to start running some patterns with these new loadings. Let us know what you think of this new Bismuth offering from Remington in the comments below!