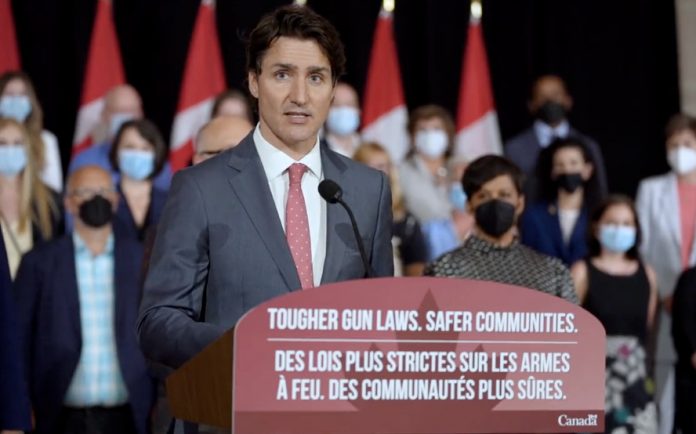 Before Justin Trudeau was elected prime minister of Canada, he told voters that gun registration would “never” lead to confiscation in the great white north.

“A piece of a large puzzle that counteracts crime… but by making guns something that we can track… I mean the fear in here is that the first step towards registering your guns is just the first step of taking away guns from everyone,” Trudeau said in 2010.

“That’s never going to happen because here in Canada we have a culture that has grown up with guns and that respects the need to go out into the wilderness and shoot things from time to time,” he added.

Footage of Trudeau making those remarks was being shared on Twitter this week.  The resurfacing of the video comes on the heels of an announcement by his administration that it would introduce legislation to, among other things, put a freeze on handgun ownership.

“What this means is that it will no longer be possible to buy, sell, transfer or import handguns anywhere in Canada,” he said at a press conference on May 30.

“We recognize that the vast majority of gun owners use them safely and in accordance with the law, but other than using firearms for sport shooting and hunting, there is no reason anyone in Canada should need guns in their everyday lives,” he added.

Trudeau also hopes to begin the confiscation of black rifles by year’s end.

“The first AR-15s and other assault-style firearms will start to be bought back by the end of this year,” said Canadian Minister of Public Safety Marco Mendicino last Monday. “It’s going to be hard, but we’re going to get it done.”

Registration is always the first step to confiscation.  Don’t ever believe a politician when they tell you otherwise.

Gun Store Merchant Code is a First Step Toward Watchlists, Bans and an Illegal Registry