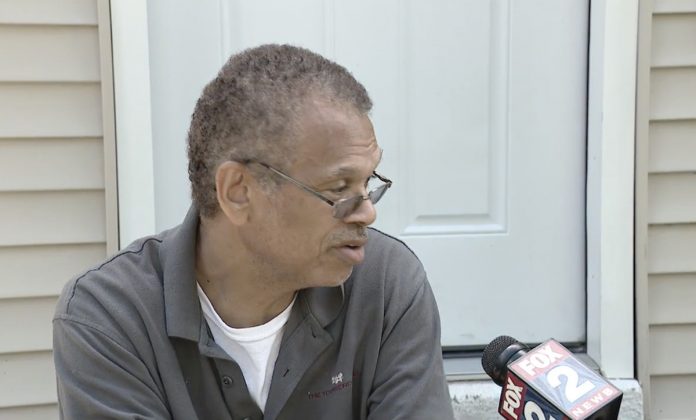 Tuesday morning at 4:30 am, Maiso Jackson, who resides on Salem Street on the west side of Detroit, was awakened by a man knocking on his door and yelling.

Parts of this encounter were recorded on the homeowner’s Ring doorbell camera, which you can view in the video embedded above.

Jackson opened the door, and was met with a man showing obvious aggression.

“(He was) talking about how someone owed him money, I said no one here owes you money,” Jackson told Fox2 News, looking back at the incident.

“I don’t know what you’re talking about,” he told the man.

The man was insisting that money was owed, and Jackson was unable to reason with him. He began to feel threatened, so he called 911.

While waiting for the authorities to arrive, the man became more violent towards Jackson. He broke a window, and Jackson feared that the destruction would continue. It was at this point Jackson chose to arm himself.

Jackson has had a gun for eight years and has taken part in gun safety training.

Jackson recalled the events, “I came outside and said you have to leave, you can’t be doing this. So then he reached for his gun and pulled it out. I had to defend myself, I had to shoot him because of that.”

Jackson fired four shots, hitting the man in the chest and killing him.

Jackson was sure that it was the perp’s life or his own, and that if he did not act in self-defense he would have been killed.

Police arrived and put Jackson in cuffs. Jackson willingly followed orders, being aware that even as a lawful gun owner he would be questioned about the incident.

“I was just in shock, he wouldn’t leave. He tried to kill me and I didn’t do nothing to the guy,” Jackson said. “That’s the part that’s kind of sad.”

By sharing this story, Jackson hopes that others can learn a lesson from his experience.

“You have to be on guard, you have to be prepared, You can’t just let people run you over, hurt you, and don’t do nothing about it. You have to defend yourself,” he said.

Jackson was questioned and released without any charges, according to Detroit police.