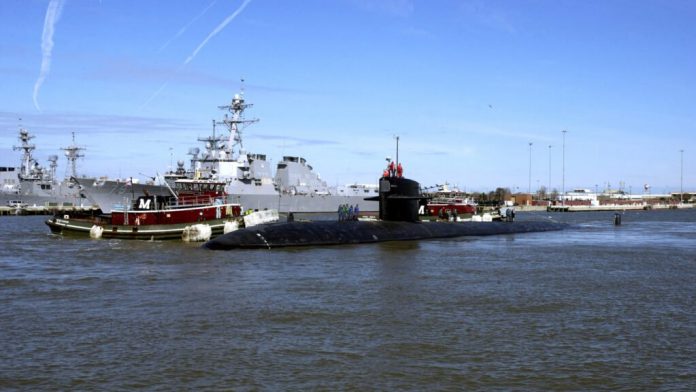 The Los Angeles-class attack submarine USS Norfolk is guided from the pier as the ship departs Naval Station Norfolk for a regularly scheduled deployment. (Photo courtesy of US Navy)

WASHINGTON: While House lawmakers this week take the initial steps on drafting their fiscal 2023 defense policy bill, they’ll be doing so without the input from the Navy’s long-term ship maintenance and modernization plan, a service spokesman confirmed to Breaking Defense.

The long-term maintenance plan, a sort of complement to the 30-year shipbuilding plan, was first devised by former Navy acquisition executive Hondo Guerts three years ago, and this year’s was supposed to be delivered to lawmakers alongside the annual budget request. It serves to provide lawmakers with insight on the Navy’s ship maintenance schedules and initiatives to improve the industrial base, as well as give industry some stability by outlining how much work will be up for grabs in the near term.

The service’s track record on delivering either a shipbuilding or ship maintenance plans in recent years has been shoddy. The Navy’s most recent long-term shipbuilding plan given to lawmakers this year was the first since 2019, which has not sat well with many in Congress who point out the law mandates the Navy deliver one annually. And for the last three years the maintenance plan has been MIA.

While speaking to reporters in April during the Pentagon’s budget rollout, Jay Stefany, a senior civilian overseeing the service’s acquisitions, said the Navy had planned to deliver the maintenance plan within the coming weeks.

That has not happened, according to the Navy spokesman, who added the document will now likely be cut to projecting out 15 years rather than 30. The spokesperson did not say when lawmakers could expect the plan.

RELATED: The Navy is broken. Congress must launch a commission to find the path forward.

Meanwhile on Capitol Hill, House lawmakers this week began the first stages of drafting the FY23 defense policy bill, which has each individual subcommittee publicly unveil and formally pass their separate parts of the larger legislation. By failing to deliver the ship maintenance plan prior to these hearings, the Navy loses some potential influence on the final bill, and lawmakers’ staffs lack context for the service’s plans.

“The lack of a concrete plan beyond the [future years defense program] will continue a trend of uncertainty that risks becoming systemic for the shipbuilding-industrial base at a time when workforce concerns and facility modernization investments are of paramount importance for building and maintaining the future fleet,” Congressmen Rob Wittman, R-Va., and Mike Rogers, R-Ala., wrote in an April op-ed for Defense News.

According to the draft legislation the House Armed Services subcommittees published this week, lawmakers are moving to mandate the delivery of the annual maintenance and modernization plan with each budget submission. House authorizers did not include any language targeting the Navy’s choice to include multiple options in the long-term shipbuilding plan.