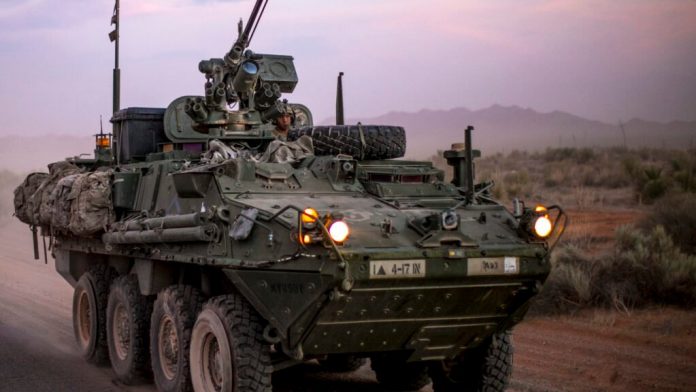 WASHINGTON: House lawmakers want the Army to assess the feasibility of adding autonomy into its fleet of Stryker vehicles, according to draft legislation from a House Armed Services Committee panel.

The draft fiscal 2023 National Defense Authorization Act language from the HASC subcommittee on tactical air and land forces would direct the Army’s top acquisition official to brief HASC on the “advisability, feasibility, and estimated cost” of creating a program to develop and prototype Stryker vehicles outfitted with autonomous, optionally manned or advanced operator assistance systems.

“Given the Army’s commitment to the Stryker vehicle and its apparent adaptability to a variety of tactical functions, the committee considers this system a likely candidate for research, development, testing, and operational experimentation with installed autonomous and advanced operator assistance systems,” the committee wrote.

The legislation markup orders a report that must include performance objectives, a plan for testing in relevant environments and scenarios, as well as an estimated schedule and cost. The concept is not entirely new, as the Army’s Tank Automotive Research, Development and Engineering Center demonstrated an autonomous Stryker as far back as 2003 at Fort Bliss, according to an Army newsletter at the time.

The Army has a number of ongoing ground vehicle autonomy research programs through its major modernization effort. The Army’s Ground Vehicle System Center has an autonomous technology demonstrator called Project Origin that is informing requirements for the service’s Robotic Combat Vehicle signature program. That vehicle has fought as part of the opposing force in training center rotations, led special operations forces into missions during an exercise earlier this year and is currently in Germany for an experiment on European terrain. The Army is also planning to have autonomous capabilities in its Optionally Manned Fighting Vehicle platform, a top modernization priority.

But the HASC subcommittee is pressing for more details from the Army on transitioning those programs into acquisition programs. The subcommittee draft would direct the Army to brief Congress on its development and acquisition strategy for autonomous ground vehicles, “including the planned systems for acquisition, projected timeline, quality and safety metrics, and identification and assessment of any viable commercially available systems.”

“Given the level of effort the Army has made with various classes of autonomous or optionally manned vehicles, the committee would like a better understanding of the Army’s plans, if any, to transition from developmental projects to acquisition programs,” the bill’s report reads.

After Stingers and Javelins Sent To Ukraine, Concerns About Weapons Stockpiles

Recent shipments of Stinger anti-aircraft weapons and Javelin anti-tank weapons to Ukraine have caught the attention of lawmakers, causing concern among committee members about the industrial base’s capacity to replenish those stocks. Thus, the committee directs the Army to submit a report on the service’s plans to reduce risk to its tactical missile industrial base and supply chain, including specific risks to its current stockpiles, as well as future options for surging capacity to fill shortfalls in the US and allies’ anti-tank and anti-air inventory.

“Recent activities in Ukraine have increased demand for ground-launched, short-range air defense munitions, and ongoing risk of conflict with major state actors raises questions about capacity risk associated with our current stockpiles of anti-air and anti-tank capability,” the report notes.

Additionally, the committee “remains concerned” that the Army is “underestimating risk” to its small arms industrial base. It specifically calls attention to the service’s M240 medium machine gun, for which the Army didn’t request funding in its FY23 budget request. The report notes that Army has hit its procurement objective for the weapon and its M240 acquisition and sustainment strategy relies on the replacement of individual parts instead of new production. The committee wants a wide-ranging report detailing the state of the Army’s small arms industrial base, as well as the impact of shutting down older production lines, such as those for the M240. The report must specify options to sustain that industrial base through upgrades to older weapons.

“The committee is concerned that the Army may be developing duplicative or redundant combat vehicle missile programs that may be unaffordable and could require a change in the TOW missile infrastructure fielded today,” the committee wrote.

The committee wants the Army submit a report providing details about the requirements Close Combat Missile System-Heavy and Multi-Purpose Guided Missile, along with schedules and cost estimates. It also wants more information on whether the new missile requirements will maintain current TOW missile size and any costs associated with modifying current TOW launchers.

The report must include details on using the TOW form factor to address other combat requirements, such as short-range air defense and counter-unmanned aerial systems.

Augmenting the Army’s intelligence, surveillance and reconnaissance capabilities is also top of mind for the lawmakers. The report directs the Army secretary to submit a report to HASC regarding a plan to develop a program of record to fill gaps in the service’s ISR capabilities, and specifically at high-altitudes.

The Army is currently relying on contractor-owned, contractor-operated (COCO) platforms, such as the ARTEMIS aircraft, to reduce the cost burden. The ARTEMIS aircraft has been particularly active in Europe in recent weeks given the ongoing conflict in Ukraine. It’s a strategy the committee is fine with, for now.

“The committee encourages the Secretary of the Army to continue utilizing the COCO model for ISR requirements in areas of operation of high value at the direction of the geographic combatant commanders, while developing an acquisition strategy to meet enduring ISR requirements,” the report notes.

When Macron and Biden Meet, Will it Be Love, Actually?