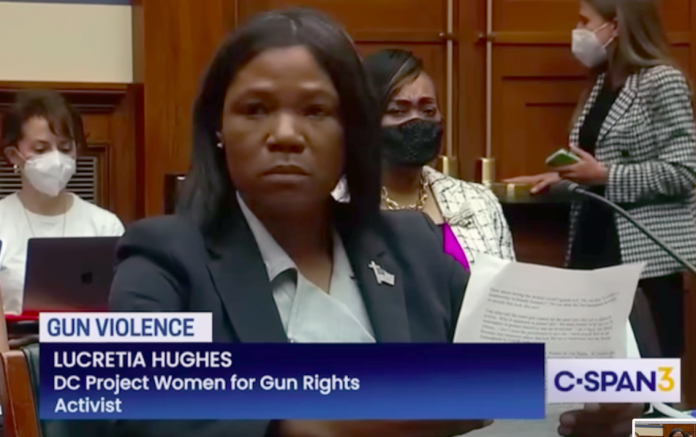 Lucretia Hughes Klucken, a DC Project Delegate from Georgia, was the only pro-gun voice providing testimony in the June 8 hearing before the United States House of Representatives Committee on Oversight and Reform: The Urgent Need to Address the Gun Violence Epidemic. On behalf of the DC Project, a nationwide organization of women committed to safeguarding the Second Amendment, she called on Congress to ban gun-free zones and challenged the premise that adding more gun control measures will keep Americans and those most vulnerable among us, our children, safe.

During her testimony, Hughes Klucken stated, “Words can’t describe how hard it is to bury a child. My son’s death was the result of a criminal with an evil heart and a justice system failing to hold him accountable for the laws he had already broken. You see, a convicted felon killed my son with an illegally obtained gun. Our gun control lobbyists and politicians claim that their policies will save lives and reduce violence. Well, those policies did not save my son.”

“Following the excruciating loss suffered by the people and communities of Buffalo, NY and Uvalde, TX, it was heart-wrenching for Lucretia to revisit her own son’s violent death,” said DC Project Founder Dianna Muller, who was present at the hearing. “The depth of loss for everyone there was palpable, yet it’s even more heartbreaking because the lawmakers and their guests who insist on more gun control seem to think criminals will stop hurting people after another anti-gun measure is passed,” said Muller. “The reality is, as Lucretia said, none of the laws that restrict law-abiding gun owners’ rights do anything to keep folks safe.”

Anti-Gun Legislation Does Not Work
While addressing criminal violence in the United States, Hughes Klucken continued, “The laws being discussed are already implemented in cities across this country. We have decades of evidence proving THEY DO NOT WORK!” she declared. “St. Louis, Chicago, Washington, D.C., and my home, Atlanta, are gun-control utopias, and they are plagued with the most violence. Ten more laws, twenty more, or a thousand more, won’t make what is already illegal more wrong or stop criminals from committing crimes. You are crazy to think that these laws will keep you safe.”

Gun-Control Fails the Black Community
Hughes Klucken described her experience in the black community of Atlanta, Georgia, by saying, “I am walking testimony of how the criminal justice system and gun control laws (which are steeped in racism, by the way) have failed the black community. It is the curse of the black community, and something has to change. Thoughts and prayers and calls for more gun control aren’t enough. How about letting me defend myself against evil? Do you think I’m not capable or trustworthy to handle firearms? Do you think the Second Amendment does not apply to people that look like me? You who call for more gun control are the same ones that call to defund the police. Who is supposed to protect me?” she asked. “I teach people how to use firearms and empower others that look like me to understand that the Second Amendment is their right, too.”

Secure Schools the Way We Secure the Capitol
In her written testimony, Hughes Klucken addressed the disconnect between how politicians and children are protected. “We need to secure our schools like we secure this building. Members of Congress appreciate the role armed security plays in their lives. This Capitol is surrounded by its own police force who carry firearms. The debate is really between ‘safety from guns’ and ‘safety with guns,’ she said. “Most legislators here are not against weapons; they are just against the citizenry of having firearms and using them illegally. Further, ensure a mental health professional is at every school to identify and treat students struggling with mental and emotional well-being.”

Provide Safe Firearms Education
Hughes Klucken suggested funding non-partisan firearm safety education, “like the K.I.D.S. Safe Foundation to teach a non-partisan firearm safety course to every first-grader in the country. Fund non-government organizations that provide safe storage of firearms when families and individuals are experiencing difficult times, like Hold My Guns. Enhance economic opportunities for young men to have something more significant to live for than the unfortunate attention they receive by committing crimes. Education, training, and safe firearms handling are the keys to saving lives.”

In her powerful conclusion, Hughes Klucken said, “Nothing in these bills does anything to make us safer or address the mental health crisis in this country. Despite living with the heartache of the loss of my son daily, I believe that it is our God-given right to defend ourselves from acts of violence. Taking away my rights and the rights of law-abiding citizens will not bring Emannuel back, but it will embolden criminals. We all want the same thing. To be safe. Gun owners are not the enemy, and these gun control policies are not the solution.”

How Beijing Is Changing Its Rules Around Taiwan

Take heed unto thyself, and unto the doctrine…”