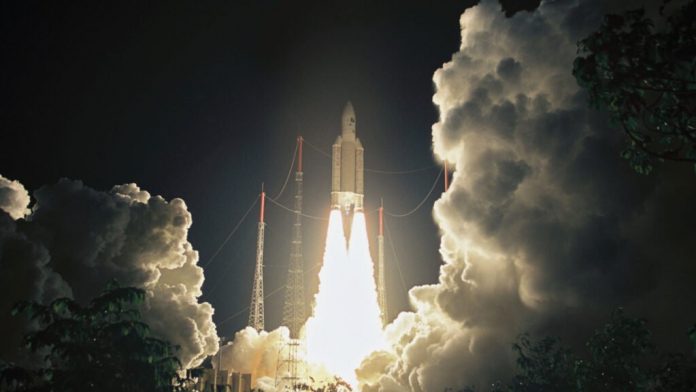 In this handout picture released by the European Space Agency (ESP) the Ariane- 5 space rocket is launched on December 21, 2005 from the Kourou Space Center, French Guiana. (Photo by ESA/CNES/Arianespace/Getty Images)

WASHINGTON: In an important signal of solidarity with the US in efforts to set ground rules for how nations interact in space, France on Tuesday became the 20th signatory of the Artemis Accords, which lay out norms for exploration and exploitation of the Moon, Mars and potentially mineral-rich asteroids.

“Today’s signature is not just a victory for America and France, our nation’s first international ally, but represents a dramatic step forward for norms of behavior generally,” said Mike Gold, former NASA associate administrator for space policy and partnerships, who played a major role in crafting the accords during the Trump administration.

Gold told Breaking Defense that France joining “the already robust Artemis Accords family of nations shows that there is a strong desire globally to honor and implement the principles of the Outer Space Treaty and other international agreements.”

France is Europe’s largest space power — across the military, commercial and civil sectors — and increasingly has been aligning itself with the US in its national security approach to space.

For example, in February France, along with five other close American allies, signed shared “call to action” for future collaboration in defending their interests in outer space, including potential development efforts to fill gaps in their collective military capabilities. (In addition, France is also the only US ally to overtly embrace the development and use of space-based counter-space weapons.)

Philippe Baptiste, the head of France’s space agency CNES, and his counterpart, NASA Administrator Bill Nelson, signed the official documents joining Paris to the accords, which were initiated by NASA in 2020.

French Ambassador Philippe Étienne hosted the signing ceremony last night at his residence here, timed to coincide with a reception celebrating the 60th anniversary of French space agency CNES. The reception featured a towering cake featuring star-shaped sparklers, and was attended by the four astronauts (one French, two American and one Japanese) who were ferried to the International Space Station on SpaceX’s second Crew Dragon mission. Speaking to attendees, Étienne pledged his country to expanding efforts with the US to support norms development for space activities.

“We must establish the norms and principles that will govern civil exploration on the moon on Mars, and other celestial bodies as well,” he said. “The space industry is evolving, expanding at an extremely fast pace. As new players come on board the number of risk rises but so does the number of opportunities. The Artemis Accords are the first step towards the adoption of a shared, internationally agreed upon, legal framework for the good of all mankind.”

The US National Space Council’s executive secretary, Chirag Parikh, who spoke in lieu of his boss Vice President Kamala Harris who was traveling, lauded France’s adhesion to the Artemis Accords and expressed hope that other nations in Europe and around the world would follow suit.

In particular, US State Department officials have been wooing Germany, Europe’s political and economic powerhouse, as well as a strong space player. Berlin has instead been focused on trying to corral its European Space Agency colleagues into a more cohesive stance on space resource extraction, according to a January article in Politico. But there also have been some nervous jitters among German politicians about a perceived lack of alignment of some language in the Artemis Accords with the precepts of the 1967 Outer Space Treaty and international space law (something US officials dispute.)

Parikh further welcomed the statement by Paris in support of the US call for a ban on testing of direct ascent, destructive anti-satellite (ASAT) missiles — although that isn’t too surprising, as France in 2019 called for a international ban on destructive space activities that create long-lived debris.

Harris announced the self-imposed ban in April, and it subsequently formed the basis of Biden administration proposals during the first-ever United Nations meeting in May seeking to set norms of behavior for military space activities in order to reduce risks of conflict.

The development of international norms for responsible behavior in space, Parikih stressed, is not just important or applicable to NASA and human exploration.

“It’s not just civil space exploration. It’s national security; it’s commercial; and civil. It’s the responsible use of space so we can actually use space for all the different purposes,” he said.

Jessica West, of Canada’s Project Ploughshares and an expert on international space governance, said that the Artemis Accords and the quest for military norms are intertwined.

“The objective of the Artemis Accords is to develop norms of behavior to ensure that upcoming civil and commercial activities on the Moon take place in a way that is both safe and sustainable. The objective is similar to the process currently unrolling at the United Nations to nurture common expectations of military and security-related activities to avoid miscommunication and misunderstanding that can easily escalate to confrontation and conflict,” she told Breaking Defense. “Having a major European space actor such as France on board bodes well for both processes.”

Indeed, the Space Force in September 2020 signed a cooperative agreement with NASA that included cooperation on activities in cislunar space around the Moon, and specifically in supporting the Artemis Accords.

Service leadership, from Chief of Space Operations Gen. Jay Raymond on down, have been publicly supportive of the Biden administration’s unilateral pledge to forgo destructive ASAT testing. Further, as Breaking Defense first reported, Defense Secretary Lloyd Austin in July pledged to a set of “tenants” of responsible behavior — a first for the Pentagon, which traditionally has been leery of tying its own hands.

Alternative Meats for Your Thanksgiving Meal