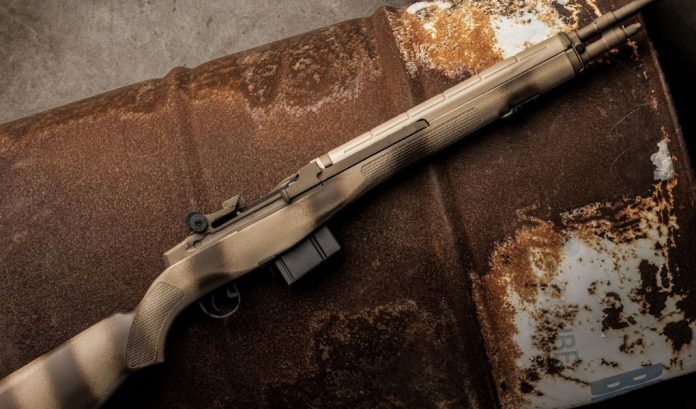 Springfield Armory is known for a bevy of new firearms in the news as of late. They surprisingly brought to market a bullpup in the Hellion, they now are crafting bolt-action rifles with their Waypoint, and even have one of the hottest selling CCW pistols on the market with the Hellcat. Let’s not forget that they make the iconic M1A rifle as well. In fact, they recently have debuted a new Desert FDE M1A in a standard and Scout Squad configuration as an NBS-exclusive offering.

This new colorway that Springfield Armory is offering is reminiscent of something that you would find in the desert or from one of our military conflicts in the Middle East. So, it is fitting that it is dubbed Desert FDE (Flat Dark Earth). These will be soon available at NBS dealers throughout the US in a standard 22″ barrel or the shorter 18″ Scout Squad. The specifications for the standard NBS-Exclusive Desert M1A can be read below as presented by Springfield Armory:

An NBS Distributor exclusive, the compact and handy M1A Scout Squad Two-Tone Desert FDE Rifle features a short 18” barrel. Both the barrel and action feature a Desert FDE Cerakote finish, and a two-tone FDE composite stock complements the Cerakote finish. The rifle is fitted out with an OD Green cotton sling and comes standard with both one 15-round and one 10-round magazine.

The standard NBS-Exclusive Desert FDE M1A has an MSRP of $1,847 while the 18″ Scout Squad variant lists for $1,980. For anyone who is a fan of the M1A rifle, these would be a nice addition to anyone’s collection because they surely will not produce these for a long time. As always, let us know all of your thoughts in the Comments below! We always appreciate your feedback.