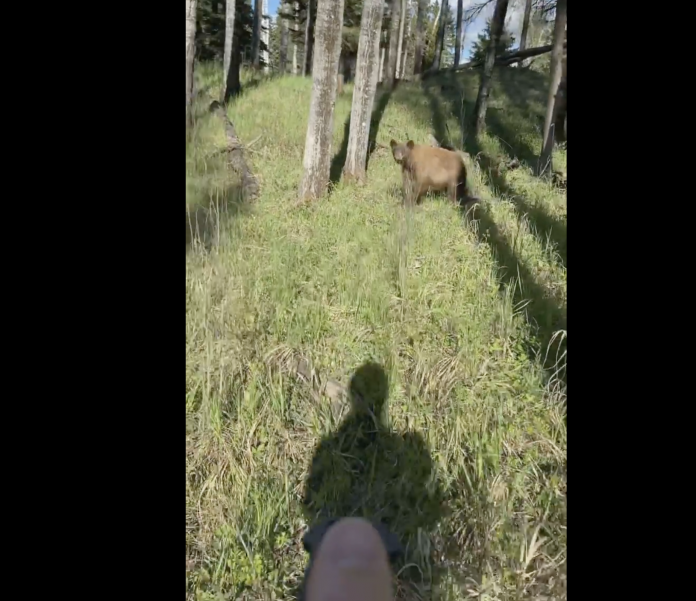 “Whoa, bear! Hey, bear!” says Curtis Matwishyn repeatedly for nearly three minutes as he backs away from a curious young black bear in a video. Matwishyn is a photographer from Saskatchewan, Canada. He was shooting photos in Prince Albert National Park—when a juvenile bear advanced toward him.

“I was upwind of the bear and it definitely smelled me,” Matwishyn wrote in a Facebook post. “When it turned off the trail and started following me, I started shouting and waving my arms over my head to try to scare it off, but it was not fazed by that.”

Matwishyn started recording a video as he slowly retreated, holding a bear spray canister in his other hand. Notably, he doesn’t deploy the bear spray right away. Instead, the bear gets within feet of Matwishyn several times before the photographer gives the small bruin a face full of pepper spray. The bear immediately runs away.

Prince Albert National Park is home to a healthy population of black bears, according to Parks Canada. Douglas Clark, a University of Saskatchewan researcher, told CTV Saskatoon that the bear appears to be a “teen,” or sub-adult between 3 and 4 years old. “That video really gets my attention because that bear is not indifferent to what he’s doing, in fact, it’s approaching,” Clark told CTV. “It’s approaching like it hasn’t totally figured out what it wants to do. That is not flat out, I’m going to eat you for lunch, that’s not what that bear is doing, but it’s not stopping.”

Read Next: Cow Moose Charges Grizzly Bear After It Kills her Calf

Clark added that Matwishyn responded to the bear’s advance in an appropriate manner. “Hopefully this encounter will help the bear learn to run from humans rather than approach them as continued behavior like this can lead to the destruction of a bear,” wrote Matwishyn.

Police Impersonators: Home Invader Shoots His Partner, Then Is Shot Dead By Homeowner