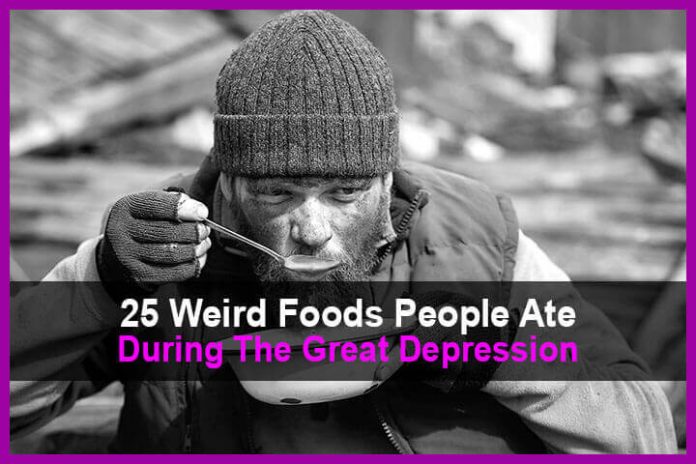 The old saying “Necessity is the mother of invention” rings true when you look into how Americans filled their bellies during the Great Depression.

After the stock market crash in October 1929, the nation headed into an economic slide that lasted an entire decade. Unemployment was high, and many Americans had to find ways to survive on little to no income.

But Americans are nothing if not creative. Flour sacks became dress material. Cardboard became shoe insoles. And in the kitchen, families came up with new recipes that made use of whatever foods they had on hand.

Although some of these recipes would get a definite thumbs down today – even in the midst of our current inflationary times – others are still prepared and eaten today. Here’s a list of some of the weird foods people ate during the Great Depression.

Not so fondly named after the U.S. President many people blamed for the Great Depression, Hoover Stew was a mishmash of macaroni, canned tomatoes, canned corn or canned beans, and cut-up hotdogs. This dish became a mainstay in 1930s soup kitchens. Here is the basic recipe for Hoover Stew.

Nicknamed S**t On a Shingle, Save Our Stomachs, or SOS for short, creamed chip beef was served to soldiers in WWI and WWII and found its way into American kitchens during the Depression. Some diners still serve it today.

The recipe features dried beef mixed into a roux made of butter, flour, and milk that usually is served on a piece of toast. Nostalgic or disgusting? You can make the call with this recipe.

Many thrifty homesteaders know that dandelion greens are edible, and so did Depression-era homemakers. You can dress the backyard greens with olive oil, lemon juice, and salt. Or check out this recipe for ideas for other add-ins.

Mulligan stew was a catch-all term for a catch-all dish that became popular with hobos, homeless people who rode the rails during the Great Depression. An authentic Mulligan Stew was a weird mix of whatever could be thrown into a pot to make a filling meal.

Sometimes even sawdust or lint was part of the stew. Today’s Mulligan Stew recipes – like this one – are more like classic beef stews.

The idea for this one must have come out of sheer desperation. Since onions and peanut butter were available and cheap, why not combine them? Here’s an article by someone who gave this dish a try and lived to tell the tale. And here’s another recipe.

What do you do when your bread has gone stale during hard times? You cook it and eat it anyway. Watch the video below to learn from Clara Cannucciari, who lived through the Depression, on how to make cooked bread.

With fresh meat hard to come by, people turned to cheap cuts and processed alternatives like bologna. But folks prepared them in new and different ways to shake things up a bit. If you have cheese and cauliflower, you can make a version like the one in the video below.

Clara is back with a video on making Poorman’s Meal, an aptly named recipe that consists of fried potatoes and diced hotdogs. This article has the written recipe.

No ice cream? No problem. Here is a recipe for a Depression-era substitute. The ingredients include raspberry Jell-O, milk, sugar, vanilla extract, and heavy cream. You can watch the video below to see how to make this easy no-churn recipe from 1938.

You’ll want to forget about the egg drop soup you may have ordered in a Chinese restaurant when you review this recipe. The video below from Clara has a recipe featuring potatoes, onions, and scrambled eggs.

This weird-sounding soup was a staple in Amish households during the Great Depression. The ingredients are hot coffee, four slices of toast, sugar, and cream. You can read more about coffee soup and watch an amusing video right here.

Mashups were a common way to use up whatever you had on hand during the Depression, and the Garbage Plate is another example. This recipe combines macaroni salad, home fries, baked beans, and sausage or ground beef and is topped with chili, onions, mustard, and hot sauce or ketchup.

Another favorite with the Amish community during the Depression, Cold Milk Soup is a mixture of bananas, sugar, and milk. It’s kind of like breakfast served at any time of day, and you could change it up by adding bread or whatever fruit you had on hand.

Simple and inexpensive, this a Depression-era meal of cabbage and dumplings was filling and not too bad in the taste department. It consists of fried cabbage and onions along with egg and flour dumplings. Here is one recipe.

In an effort to set a good example for the nation during the Depression, Eleanor Roosevelt insisted that simple recipes be served to White House guests. Prune pudding was among them. You can read about and learn how to make it here. Or you can try out the recipe for Hard Time Pudding here.

I don’t know about you, but I am not too keen to try a pie with the word “mock” in its title. However, Depression-era recipes (like this one), which contain no apples and use buttery crackers for the crust, are surprisingly tasty.

The secret to the apple-y taste is the addition of cream of tartar. Cream of tartar, or potassium bitartrate, is the sediment found in the barrel after wine is fermented. According to scientists, the ingredient can trick your brain into thinking you’re eating apples.

Okay, now that we’ve got you thinking about pie, here’s another strange pie recipe that made the rounds during the 1930s. The ingredients include apple cider vinegar, unsalted butter, flour, brown sugar, ground cinnamon, ground nutmeg, eggs, salt, and water. You can find the recipe right here.

Scientists at Cornell University devised Milkorno as an inexpensive food during the Depression. It’s an unappetizing-sounding mixture of cornmeal and dried milk powder that could be used as the basis for muffins, biscuits, pudding, and other baked goods.

Home economists claimed that a family of five could eat for less than $5 a week by substituting Milkorno for cornmeal and flour. And a 1930s magazine ad for Milkorno claimed that Eleanor Roosevelt used Milkorno for state dinners at the White House.

Two Depression-era pantry staples were peanut butter and mayonnaise. So it makes sense that folks would try the two together as a sandwich. With its sour, nutty flavor, the peanut butter-mayo sandwich caught on for a while.

20. Peanut Butter and Other Stuff

Eleanor Roosevelt promoted this dish, which sounds more like a casserole than a pasta dish. The instructions are to boil the spaghetti for about 25 minutes until mushy and then mix it with boiled carrots and a white sauce made from milk, flour, salt, butter, and a dash of pepper. After mixing, you pour the concoction into a casserole dish and bake.

In their book, A Square Meal: A Culinary History of the Great Depression, authors Jane Ziegelman and Andy Coe say of boiled carrots and spaghetti, “Bland is really the operative word here. It does not have much flavor, and it wasn’t really supposed to have much flavor. What it was a vehicle for nutrition and nutrients, but it wasn’t supposed to make you excited about food.”

When there wasn’t enough meat to make an actual “meat” loaf, American homemakers added anything they could think of to stretch whatever protein they had for their loaves. Raisins, peanut butter, stale bread, nuts, cereal, crackers, leftovers – were all possible ingredients for an “Anything Loaf.” This video shows how to make a traditional 1938 meatloaf.

Home cooks used potatoes, one of the most widely available foods during the Depression, as the basis for many dishes. They often made simple potato pancakes by frying leftover mashed potatoes or combining grated potatoes with flour and eggs.

Potato pancakes worked as a meal on their own or as a side dish. Below is a video that shows you how to make potato pancakes. Here’s another recipe to check out.

This highly Americanized version of a Chinese dish was popular during the Depression. It’s another mishmash that makes use of whatever ingredients you have on hand. This 1938 Chop Suey recipe includes ground beef, macaroni, rice, and tomato sauce.

Did you know that Kraft Mac and Cheese made its debut during the Depression? Introduced as Kraft Dinner in 1937, this still popular and still inexpensive boxed product sold for 19 cents and claimed to serve four people. Kraft Foods sold 8 million boxes that first year.

Kraft Macaroni and Cheese still consists of dried macaroni and a little packet of processed cheese powder. Although there are now many variations of the original as well as similar competing products, Kraft Mac and Cheese sales average about a million boxes every day. Here is a recipe for making a similar meal at home without the box.

The COVID-10 shutdowns and today’s rising inflation may be factors in a renewed interest in Great Depression recipes. If you’d like to explore this trend further, here are some resources to check out.

“And God said unto Noah, This is the token of…”

Building partitions in our workshop. I had to do just a bit of snowplowing.

How To Preserve Food For Long Term Storage