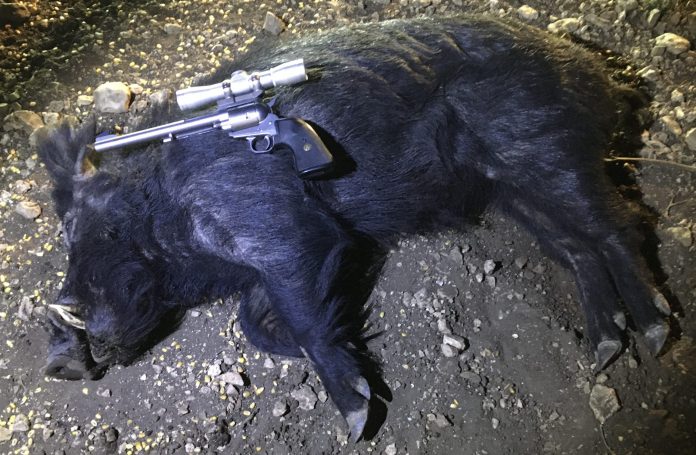 This is going to be a 3 part article of calibers suitable for handgun hunting feral hogs and we will deal with those calibers that are typically used in revolvers.  I will attempt to cover each group of calibers sufficiently and provide some good examples and information.  I’ll break down the groupings into 357 and 41’s, 44’s and 45’s, and lastly 475’s and 50’s.  If you’re contemplating going after pigs with a handgun or perhaps you already hunt pigs but want to add a challenge to your quest.  Hopefully you will find the  information you need to help you attain your goal.  Throughout the compilation of these articles when mentioning bullet weights I’m talking about using commonly available factory ammunition or handloads with standard cup and core bullets. I will mention using a premium bullet or mono metal bullet at which point the lighter weights will penetrate like the heavier ones.

Based on my experiences, what we are striving for is a bullet placed properly and hopefully providing an exit.  I would place a distance limit of about 75 yards based strictly on bullet performance, placement and striving for an exit.   The exit is important because even a well hit pig can run 75 to 150 yards before finally expiring.  Without a blood trail to follow, your animal can become lost even though it’s dead.  A bullet that is heavy for caliber, and pushed at moderate velocity will serve you well at ranges out to 75 yards, with a few exceptions, moderate velocity in a revolver being 1000fps to 1300fps.  If you choose to go with a premium bullet then more velocity will enhance bullet performance.  I will strive to provide information on factory ammunition that is suitable for use on pigs for each caliber, as well as bullets for use by reloaders.

Many older shooters will tell you that the best sights are the standard black front with black notched rear sight, for me, the best sights are ones I can see.  I’ve gotten very used to having a fiber optic front sight and matching it to a standard black notched rear.  This combination has served me very well for many years in practical shooting competitions, on all of my pistols.  Since my hunting typically takes place in dimly lit areas or low light times of day, a green fiber optic front sight works great, it provides enough accuracy for my purposes and can be seen in the dimmest times of day.  Archers have been using fiber optic pins way before gun hunters got the idea, they work, they can be seen easily, and they will take abuse.  Another option that is finding its way onto hunting revolvers are the small red dot optics that are matchbox size.  I have a few revolvers with them mounted and they work really well, are fast to use and allow easy tracking of moving game with them.

Since we’re trying to be practical about what is suitable for taking hogs, we’ll start this topic with the 357’s.  One time on a dare, I used a S&W 60 2” barrel to take a feral pig, it was a good eating size pig, a 60 pounder or so.  The shot was 15 yards and the 38 Special, 129gr. Federal HydraShok did exactly what I expected, it took out the lungs and exited.

Ordinarily, I wouldn’t recommend the 38spec. or a bullet lighter than 140gr. but I knew the size of pig I’d be shooting and that the distance would be less than 20 yds.  The lightest weight bullet I’d recommend for hogs is 140 grains and using these you should limit yourself to medium sized hogs, less than 150 pounds, if you intend on delivering body shots.  If you step up to 158gr. projectiles, with proper bullet placement you should be able to take pigs up to 200 pounds or so, just keep the distance around 50 yds.  The normal 357 Magnum is one exception to the previously mentioned 75 yard distance limit for a revolver and hogs.  I say normal, because handloaded 357magnum ammunition loaded for a Freedom arms 353 revolver is a totally different performance level, more on that in a bit.

Jacketed hollow points seem to be the most prevalent bullet that is out there and readily available for the 357 Magnum.  Federal offers two loadings with 180gr. bullets, one is a Swift A Frame bullet.  Another option worth pursuing if 357 Magnum is your choice, is to use some of the newer ammunition loaded with solid copper expanding projectiles. In this case the 140gr. projectile should perform more like the heavier weighted standard construction bullets.  A S&W 27 or 28, or Ruger Blackhawk when properly loaded would be an excellent entry level revolver for hogs or deer.  The 357 Magnum makes a good revolver caliber for hogs, just remember its shortcomings and use it accordingly.  My most used bullet from my Ruger Blackhawk is a handloaded 220gr. wadcutter profile bullet that gets 1100fps from the short 4 5/8” barrel, at 50yds. It hits hard and penetrates amazingly.  There are shooters who have used the 357 magnum on elk and at distances close to 100 yards.  I feel there are much better calibers for game that size and distances that long.  As for suitable factory ammunition for pigs, Federal HydraShok 158gr. or Buffalo Bore 158gr. should be great rounds.  If a non-lead bullet is needed, Barnes, Hornady and Federal offer ammunition loaded with lead free bullets.

A seemingly forgotten member of the .357 family and one of my favorite hunting calibers for game less than 500 pounds, is the 357 Ruger Maximum.  The previously mentioned FA353 can be loaded to the same performance levels as the 357 Maximum.  This is possible due to a longer cylinder and it having only 5 chambers in it as opposed to 6 in a normal revolver. As well as the strength of the Freedom Arms 83 being head and shoulders over most others.  All of this makes it a great medium game caliber at any practical handgun hunting distances.  The 357 Maximum, was designed from the onset to deliver an adequate payload on target and take that target over for the handgun metallic silhouette sport.  It excelled at its intended purpose and the revolver it was put in was strong, reliable and accurate.  It also excels in the hunting fields, providing power and light recoil.  When using 180gr. to 220gr. bullets it is an excellent round for pigs.  Using 158gr. bullets you can get 1800-1900fps, but that bullet is better suited to lighter built game like deer.

My personal favorite for all around use on medium game is the Hornady 180gr. XTP, from my 10.5” Ruger I get nearly 1500fps and excellent accuracy.  One of the best pigs I’ve taken was with this gun and load combination. When game gets bigger and tougher I change to a partition type bullet.  The Maximum was available with a 7.5” or 10.5” barrel from Ruger and Dan Wesson barrels are available from 4” to 10”, sadly it is no longer a current factory offering. The 357 maximum with 180gr. and heavier bullets is more comparable to the 44 Magnum, with regard to performance on game and effectiveness, but with much less felt recoil.

As we progress in hole diameter, our next revolver caliber is one I have just recently gained experience with, the 41 magnum. However it seems to be a caliber that many either love or couldn’t care less about.  It is a very capable caliber and provides excellent velocity, 1100fps to 1600fps, adequate bullet weight, 170gr. to 265gr. and is offered in very good guns. Ruger, Smith&Wesson, and Freedom Arms just to name a few, my personal guns are a Freedom Arms 97, fitted with a Burris FastFire 3 red dot optic, and a S&W 657 wearing a Burris 1.5-4x pistol scope.  Using the FA97 and Hornady factory loaded 210gr. XTP ammunition, I was able to take a good eating size pig of about 75 pounds at 70 yards or so and deliver the bullet precisely.  The S&W 657 using Speer 210gr. Deep Curl bullets accounted for a nice big toothed boar at 62 yards, and a near picture perfect expanded bullet.

The velocity delivered from the short barreled FA97 is impressive, 1380fps for a 210gr. Swift A Frame bullet.  The S&W gives almost 1450fps with its 7.5” barrel and 210gr. Speer bullets. Shooting those loads through the two guns produced a 4” group for the 210gr. Speer at 100 yards and a group just slightly larger than an inch at 50 yards from the short barreled FA97, using the  210gr. Swift AF.

The 41 Magnum is also available in factory ammunition with 180gr. Barnes XPB solid copper hollow points, this ammunition should provide excellent performance and is listed at 1500fps.  Many of the 41mag users that feel it is an under utilized and under appreciated round prefer using heavier than normal bullets, ones in the 240gr. to 265gr. range, however some of those can be too long for the cylinders of some revolvers.

The Ruger, S&W N frames and Freedom Arms 83 cylinders will all handle longer rounds, the performance provided by the heavier bullets allows the 41 Magnum to close the distance between it and the 44 magnum.  My use of the 41 Magnum has shown that it is a versatile round that should garner more attention from those that may be less tolerant of recoil but want to hunt game in the lower 48 states. Using our modern bullets, within 75 yards I would feel adequately armed for everything from elk to any smaller animals.  I have good friends that have used the 41 magnum much more than I have, they’ve taken game as large as bison using the 41 as well as large African plains game. So it is easily capable of handling feral hogs of any size, if you do your part, and use proper bullets, placed properly.  One of the biggest issues with 41 Magnum popularity as I see it, is that like the 357 Maximum it suffered from a lack of good marketing and seems to have been lost and forgotten in the rush for bigger is better.  It’s a shame because it is quite a capable performer, and an honest to goodness all around hunting caliber and one that may not be popular with the masses but definitely has a group of dedicated and satisfied users.

Our first installment on handgunning hogs has covered a good entry level caliber in the 357 magnum.  We also covered what I believe to be one of the most underrated magnum handgun calibers, the 41 magnum.  In the middle we touched on one of my favorite outdated calibers the 357 maximum.  The major ammunition suppliers all produce good suitable ammunition for both the .357 and .41 magnums, some of the smaller “boutique” manufacturers offer excellent choices, so finding good factory offerings for both calibers should not be too difficult.  The next group will be those that most handgun hunters consider as hunting calibers,….the 44’s and 45’s.

How to Make DIY Waterproof Firestarters with Sawdust!