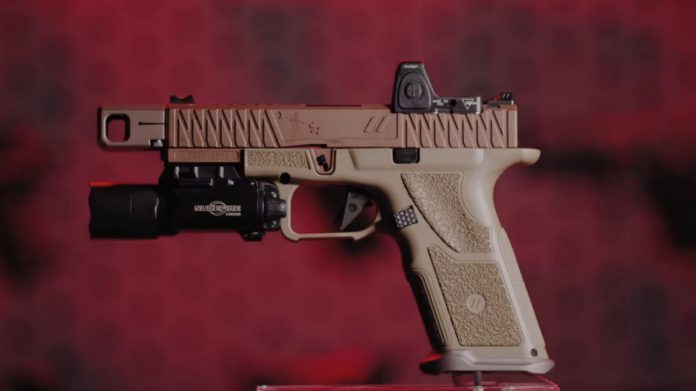 Famed Special Air Service veteran Christian Craighead and ZEV Technologies are proud to announce their new collaborative pistol, the Craighead OZ9. This new pistol has been teased by ZEV Technologies via social media for the last few weeks and now ZEV Tech is excited to announce the official launch date of the new pistol on June 15th of 2022. These new pistols are already in high demand and since they are limited edition, they will go fast. Full details on the release of the Craighead OZ9 are below. Within the design elements of Craighead’s signature OZ9. Christian pays tribute to the significance of the number 22 in his life. Some of these elements are laced in mystique and others are out in the open, like the slide serrations being cut at 22 degrees and at a depth of 22 thousandths. Also, take note of the CC logo on one side and the modified Craighead Blackbeard logo on the other. The Craighead OZ9 is based on a standard OZ9 Compact slide with a ZEV FDE X grip. The pistol features an optics cut (RMR), removable magwell, aforementioned ZEV X grip, ZEV pro trigger system, and a very distinct compensator. Each gun comes like this standard and the muzzle is threaded with 1/2×28 so that a suppressor can be attached if desired. According to Christian Craighead, everything on the pistol has a purpose and is not accidental. Christian Craighead joined the British Army as a sixteen-year-old, initially serving in the Parachute Regiment and Pathfinder Platoon. He was eventually selected for the British Army’s tier-one SMU, known for covert reconnaissance, counter-terrorism, and hostage rescue. During his time with this unit, he deployed on operations several times, also making his name as a counter-terrorism instructor. In 2019, Craighead was decorated for gallantry after confronting a major terrorist attack. In 2020, he retired from the army after twenty-eight years of active service.

The Zev Tech Craighead OZ9 will be officially released on June 15th, 2022 in limited quantities and will be sold for a price of $2,222. Be sure to keep tabs on the ZEV Technologies website as well as their social media spots for a chance to get a first shot at the new customized pistol. ‘A bloody mess’ with ‘terrible loss of life’: How a China-US conflict over Taiwan could play out