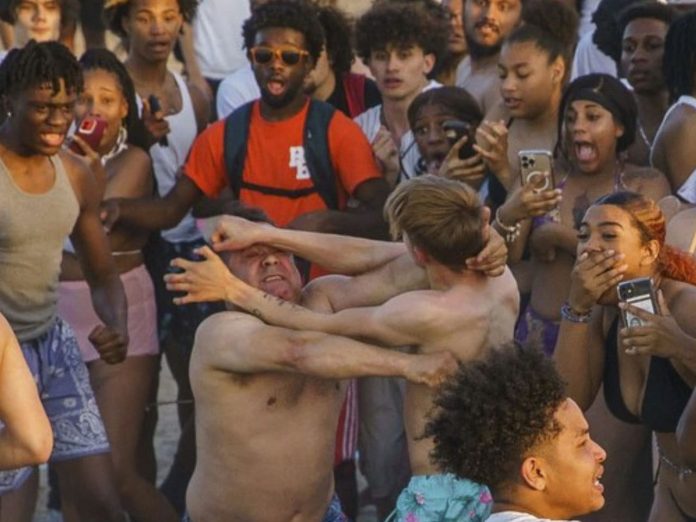 Shades of Jenny Durkin’s Summer of Love. Chicago Mayor Lori Lightfoot has looked into her Windy City crystal ball and divined that “This summer will be the summer of joy.” But from the looks of the first unofficial summer holiday, the upcoming summer in Murder City, USA is going to be anything but joyful.

You would have thought the city would have been more prepared after the “North Avenue beach takeover” a couple of weeks ago. The Wednesday night party-goers were tossed off the beach by Chicago police, but instead of going home, they just moved the mayhem a little father West to the Old Town neighborhood.

Hundreds of people had a great time dancing on top of cars, and one fine young lady twerked on the top of a bus. Chicago Alderman Michele Smith said the city should take “appropriate legal action against the organizers of the illegal event,” which, of course, they never did.

Tonight downtown is in absolute chaos. Juveniles jumping on top of buses, cars, terrorizing residents, tourists & businesses. These mass groups fought CPD & only minimal arrests were made. Why? Because CPD isn’t allowed to, they have no plan & they didn’t have enough manpower. pic.twitter.com/SwbckIzjTj

The same organizers held another “takeover” event over the Memorial Day weekend. This time the crowd chanted “[email protected] you, police!” and forced officers to move back away from the crowd. As usual, there was plenty to see on social media.

The CPD had assigned additional officers to the beach, but as the crowd grew, the cops were overwhelmed and called in more personnel to begin a “mass arrest.”

Police Supt. David Brown said organizers removed the invite from social media, but it still could be found Tuesday morning. Police made multiple arrests for gun-related offenses because almost no one found carrying a firearm had a concealed carry license as required by the state of Illinois.

There was a large group of teenagers playing music and twerking, and at some point, they started throwing objects at the police. They were throwing glass bottles, they were throwing glasses. In one case, an officer got hit in the chest with a pineapple, which exploded on his chest, and it was all over his equipment.

I guess that’s better than JHP.

Police Superintendent David Brown wondered, “Who takes a gun to the beach? Why do you need a gun to enjoy the beach?”

The police in Chicago are outnumbered and their hands are tied. Meanwhile people like Mayor Lightfoot are baffled by the record numbers of law-abiding people who are still buying millions of firearms in historic numbers. None of which isn’t a very good recipe for city-wide joy during the upcoming Summer season.

What Happens When the Trucks Stop?

What’s the best gun for me?