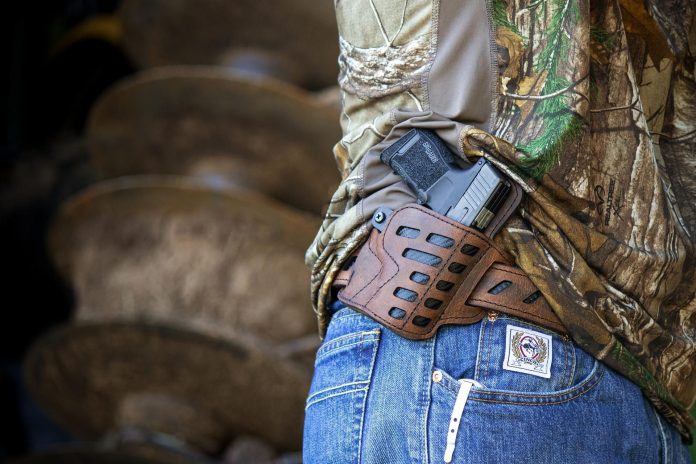 I was with my friend, Tobey, for a ruffed grouse hunt in northern New Hampshire. The spot we were hunting was an area about 20 minutes away from his home in Lancaster. Tobey has a remote cabin on this property that is loaded with grouse. It also has its fair share of black bears.

As we geared up, I noticed that besides his shotgun, Tobey was also carrying two side arms: a Ruger Mark II .22 LR semi-automatic and a Smith & Wesson Model 66-5 .357 Magnum revolver with a 4-inch barrel.

While a sidearm is nothing unusual (I carry a Springfield XD-S 3.3 .45ACP semi-automatic, myself), I was wondering, Why is he carrying two sidearms? So, I asked him.

“The ‘big’ gun is just in case we run into any bears that don’t decide to go the other way, and the .22 is for those darned porcupines and red squirrels that constantly tear up my cabin,” Tobey explained.

This all made sense to me, although I thought it was a little much. With that cleared up, we finished loading up the truck and headed out.

Northern New Hampshire’s woods contain more dangers than just bears: Eastern coyotes, which are much larger than their Western cousins, and moose, an animal that kills or injures more people than bears in this area. A shotgun loaded with birdshot will do nothing to either a bear or a moose, so a large-caliber handgun is a necessary carry.

We never did run into a bear or even a porcupine during the hunt. The moose—well, that’s another story. Grouse season happens to coincide with the fall moose rut, which makes these large animals even more unpredictable.

As we crossed a beaver dam, we heard the bellowing and crashing of a bull moose. The marsh was on either side of us, so we had no place to run. If we were caught there, we were doomed.

Our only defense was the handguns we carried, so we made sure we could put our hands on them quickly if we had to. Luckily, that did not happen, but that was the closest I have ever come to having to draw my sidearm anywhere but on the range. In this particular case, the larger-caliber guns were the right choice.

But that doesn’t mean it’s the right choice for all situations. It’s better to have too much than not enough, but then, you have to ask, Is there such a thing as too much?

My answer to that: It all depends on the situation and the area you will be in. Let’s look at different scenarios.

We don’t have many dangerous snakes or mountain lions here in New England (the occasional Timber rattlesnake is encountered), but I have found myself in the deserts of Arizona and other places out West where venomous snake encounters are the norm, and lion encounters do happen.

I also have friends who live in Kentucky, Tennessee, and North Carolina, where copperheads and rattlesnakes are often encountered, especially when getting wood from the woodpile. My friends always carry a .22—loaded with shorts, LR, or WMR—because you just never know.

When these same folks go hunting, it is an entirely different story. They normally carry a .357 Magnum, .45 ACP, .45 Colt, or a .44 Magnum as their sidearm because bears, coyotes, and wild boars are always a threat. If it is too close for a long gun, or if they go into the bush after a wounded animal, the knockdown power these rounds offer can be comforting. 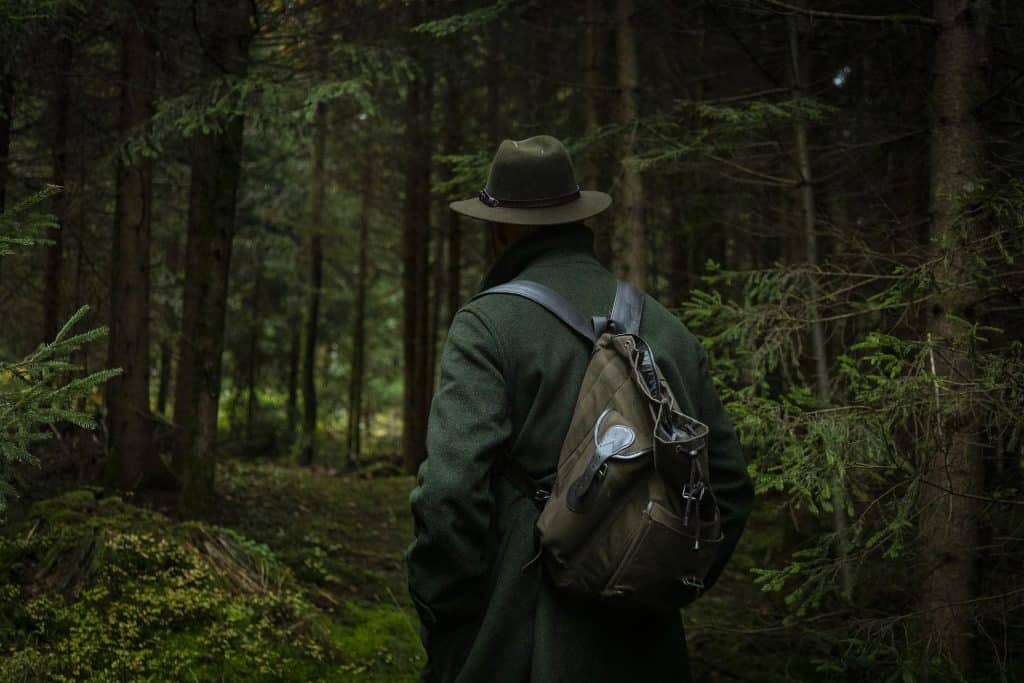 When hiking, whether alone or with someone accompanying you, chances are you will be running into the previously mentioned threats or perhaps some of the two-legged predators.

Personally, I still like my .45 ACP, but a .38 Special, .40 S&W, 9mm, or even a .380 ACP will take care of coyotes and two-legged attackers if the need arises. Plus, these calibers are small enough for either my wife or daughter to use effectively. 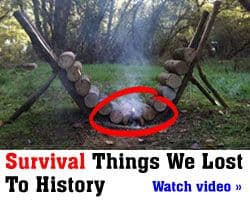 The keyword here is “effectively,” because although they can use the .45 ACP, it is a large gun, and I want them to feel comfortable using it. The .357 Magnum is more than enough gun to do the job, but when I’m on a long hike with my family, the extra weight of this firearm does take a toll after a while.

My friend, Adam, carries a Ruger .40 S&W semi-automatic every time he ventures out into the woods. I asked him, “Why a .40?”

He said, “I’m not worried about bears or anything else while I am hunting. That is what I have my rifle for. I carry the .40 as self-defense against possible human encounters. When I come out of the woods, it is often dark. The .40 gives me peace of mind.”

So, let’s change the area. What about if you live in Montana, Wyoming, or even Alaska?

There are a ton of different dangers to deal with. Besides coyotes, there are wolves. Besides black bears, they have grizzlies. In some areas, there are also bison, elk, and mountain lions—none of which I would want to run into unarmed.

In these areas— and believe me, I’ve been there—I would not leave home without a .45 ACP, .45 Colt, .44 Magnum, or a 10mm. To be honest with you, I would not go out without a rifle or a shotgun loaded with slugs, either.

A close friend of mine, John, a Wisconsinite, carries a Glock 20C 10mm when at his Northwoods cabin due to the possibility of bear encounters. He’s identified nine different bears on his property, and it’s also in the territory of a large pack of coyotes. I asked him why a 10mm, as opposed to a .357 or .44 Magnum?

I’m not a big revolver guy,” John told me. “The 10mm is somewhere between a .357 Magnum and a .41 Magnum in power, except that with the Glock, I get 15 rounds and a fast reload. I can very easily carry the Glock with two spare magazines, and that gives me 45 rounds. Plus, my G20 is just as reliable as any revolver I’ve ever used.” 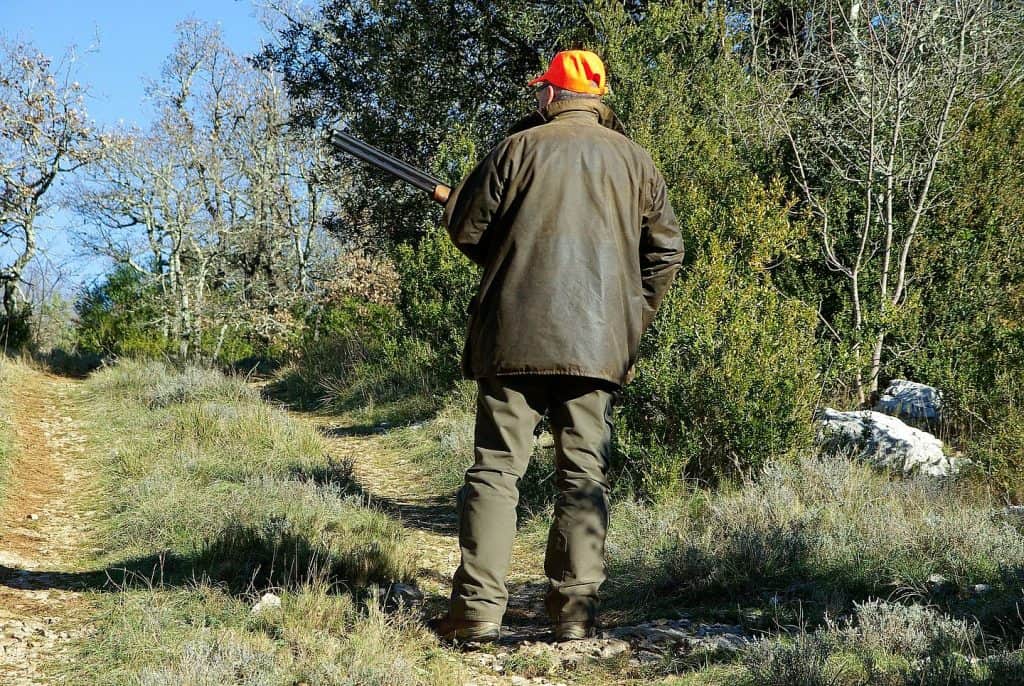 While I personally hunt with a long gun and use my sidearm only as a backup, I do know that some people hunt with a handgun. Here, again, it all depends on what you are after small game (squirrels, rabbits, porcupines, etc.) or big game (boar, deer, bear, etc.).

For small game, nothing works better than a .22 LR. It is the universal round and will quickly dispatch squirrels and rabbits. For large game, go to a .357 Magnum, .44 Magnum, or a 10mm. Anything smaller will not do the job. As much as I like the .45ACP, it is not a hunting round. It is great as a backup and for personal defense, but not for hunting.

I asked John about hunting with the 10mm. He told me that his G20 is for protection, although he has recently gotten a G40. He has not hunted with it yet, but it’s something he’s interested in.

If you are hunting with a handgun, remember that you need something with knockdown power and a round that will penetrate. That is where the mentioned calibers fit the bill.

You also need to get close. Think like a bowhunter: no long shots here, and 50 yards is probably the maximum effective range. Know your limitations and those of your firearm before you go out.

Most states have special regulations in place regarding the minimum caliber for hunting with a handgun, so pay close attention to those rules. 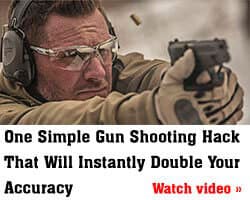 Now that you have picked the firearm to carry, how do you carry it? There are many opinions about the best way to carry. Here are a few:

Let me start off by saying that if you put your sidearm in the bottom of your pack, you are already starting off wrong. That handgun will do you no good sitting there when that bear or boar is charging down upon you. You need to carry in such a fashion that you can quickly get to it if the need arises.

The holster you choose is a personal choice. I happen to wear my Springfield XD-S .45 ACP in a Blackhawk holster on my hip. My friend, Tobey, carries his .357 Magnum and .44 Magnum in a shoulder holster and his .22 on his hip. Another popular method, especially with the larger guns, is in a chest-mounted holster. I personally don’t like these, but it is a matter of personal preference.

John is not fond of the shoulder holster rig, either, preferring to carry his sidearm in a leather Mernickle Holsters OWB worn on the hip. He has a good reason for doing so.

“I don’t like shoulder holsters, because if I am ever taken by surprise and am tackled and body to body, I can’t reach across my body to the holster.” He did go on to say, “However, during the winter, when its minus double digits and I have a lot of layers, my OWB isn’t accessible. In this case, I have a military-style shoulder holster I adjust, so it centers on my chest.”

Whichever way you choose to carry your weapon, make sure you have the proper holster for your firearm. Practice wearing it and drawing your weapon from it.

Your sidearm will do you no good if you cannot get to it and draw it.

There you have it. I probably stirred up more questions than I answered. The long and short of it is that there are no clear-cut answers. The right wilderness-carry handgun is the one you have confidence in and are comfortable with.

Remember: A 10mm is no good if you can’t shoot it with confidence.

With that said, in a dangerous situation, any sidearm is better than no sidearm.

Resources recommended for preppers and survivalists:

How to build a cost-effective and out-of-sight shelter

The solution to becoming your own home doctor when SHTF

The only survival foods you need to outlast any crisis

The easiest DIY project to produce electricity during a power outage

Until the day break, and the shadows flee…”