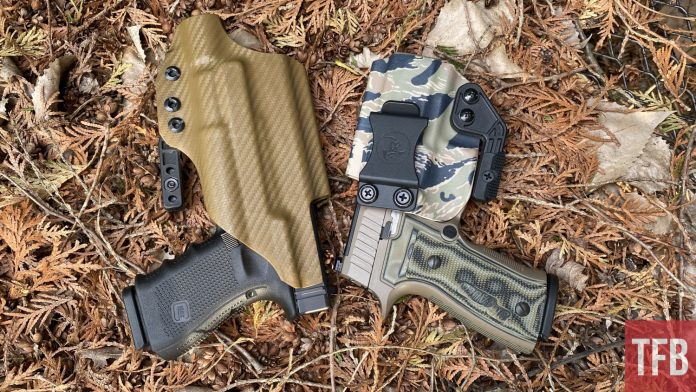 When it comes to training for self-defense, there are typically three vital parts to successfully protecting yourself. The biggest step is avoidance at all cost, you win every fight you’re never in so that’s the biggest step to remaining safe. The second step is draw stroke and ultimately if things get bad enough the third is shot placement. Pulling your firearm should be absolutely the last resort but there are occasions when there’s no other choice. We’ve talked a few times about certain drills for shot placement and working on your pistol accuracy under stress. One thing we haven’t really looked at is draw stroke and some tips to give you the upper hand when it comes to a faster draw stroke. Let’s take a closer look at ways to draw faster.

A fairly significant factor when it comes to draw stroke speed is your firearm placement on your body. This can be influenced by a person’s body type or position preference when it comes to carrying every day. Naturally, certain positions will automatically put you at a disadvantage compared to others. Carry styles like ankle carry and small of the back carry are significantly slower than others because they take so much more movement to draw your firearm than other traditional carry positions. Shoulder holsters, appendix carrying and strong side carrying all have similar draw strokes that are slightly different based on their positions. Shoulder holsters are a great option for sitting or carrying a larger firearm but are slower than other options available. I’ve written a couple full articles on what’s the best way to carry based on your body type but it’s never bad to look at the two most popular carry styles when it comes to draw strokes. Both have their own advantages as well as flaws so that’s important to take into consideration. Appendix carry is the latest trend to come screaming into the concealed carry space for a couple of reasons. Probably the biggest benefit to appendix carrying is the ease of concealing for people who have smaller thinner body structures. Most people who are on the thinner side typically have a flat area which allows them to carry a medium or full-size firearm without much effort. Appendix carrying isn’t all perfect though despite the benefits. The largest drawback to appendix carrying is the fact it’s rather difficult to clear a garment and draw with only one hand. Drawing from an appendix holster also takes more muscle movements compared to drawing from a strong side carry style. Now, when it comes to strong side carry, it has been proven to be a carry position with one of the least amount of required movements to draw your firearm from. Strong side carrying is extremely kind to bigger body frames where appendix carry may not be a comfortable option. I tend to like my holster right around the 3-4 o’clock position and not hanging further back in the 5 o’clock position. Carrying in a strong side carry position may not be the absolute fastest way to draw your firearm if you don’t practice it, but taking into account speed and overall comfort, I really think strong side carry is the way to go. Everyone is different though, so my best advice is to give both styles a try and see what feels more natural for you and train with that style. Once you decide on the handgun placement on your body, it’s time to make your draw stroke muscle memory. There are a few different ways you can build muscle memory for drawing a handgun. Luckily with the rising cost of range ammo, working on your draw stroke doesn’t always require live-fire practice to become proficient. When it comes to draw stroke, dry firing can be one of the best tools to use in order to build muscle memory and practice a fluid draw stroke. Practicing 10-15 minutes a few times a week is all you need to really put reps in and start building a constant draw stroke. Once your draw starts to become consistent, you can slowly start to incorporate skills like trigger manipulation or reloads. Another great addition is drawing with layers or cover garments over your firearm. Practicing in the comfort of your own home is significantly less stressful than attempting to pull your cover garment out of the way in a self-defense situation. Even a little bit of practice will go a long way. When it comes to live-fire training, most shooters will focus on sight acquisition and trigger pull which both are important factors. What most shooters fail to practice however is working on their draw stroke and firing from concealed. Now I know there are ranges out there that don’t allow people to draw from concealment at their range, but I cannot stress enough how important it is to find a place to practice this. Even if it’s a few magazines a month, being able to put everything together and not only draw but follow through and fire will help you immensely when it comes to a self-defense situation. Be mindful though, there is an added layer of danger when pulling your firearm from concealed when it’s loaded. Safety is an incredibly important aspect so in the beginning, it’s important to take your time and slowly work up to full speed after you understand the movements. I can’t tell you how many times I’ve seen people go 110% speed the first rep and fall apart real quick. Go slow at first and work your way up to full speed once you feel comfortable. One of the less talked about aspects of drawing from concealment is the proper hand movements which will ultimately aid you in a faster draw stroke. One of the best tips I ever got from experienced shooters back in the day is to open your right hand as much as possible when clearing a cover garment. Opening your hand up and having more surface area will clear your jacket faster and give you more space to grip your handgun. While you are pushing away your cover garment, your off hand should be pulling your shirt out of the way to clear any obstruction away from your carry gun. Clearing all obstructions will allow you a positive grip and will lead to a faster draw. With everything that comes up when talking about carrying concealed, looking at ways to improve your draw stroke is one of the less popular topics. Having the ability to draw your firearm in a self-defense situation is just as important as pulling the trigger so it’s important to out in the drawing your handgun. Whether it’s picking your correct holster position, practicing with dry or live fire and working your hand motions, it’s always good to focus on what you can do better.

What do you guys think are some of the best ways to improve your draw stroke? Is it all about finding the right holster style or is it more about practicing in different ways? Let me know what you think down in the comments below. I’m curious what you guys do personally to practice your draw. If you have questions about carrying concealed or firearms in general, feel free to shoot me a message on Instagram @fridgeoperator. Stay safe out there!