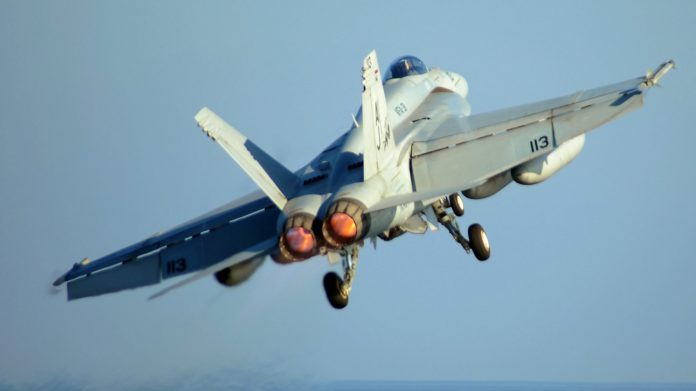 Yes, Breaking Defense is aware that “Top Gun: Maverick” is a movie about naval aviators. But in the op-ed below, former Air Force pilot and Air and Space Association President Bruce Wright argues that the hit film has plenty of lessons for the Navy’s rival service — including that its pilots must prepare, now, for the future of aerial combat.

The new “Top Gun: Maverick” movie has Tom Cruise reprising his role as Navy fighter pilot Pete “Maverick” Mitchell, now an aging, if still cocky relic, hired against all odds to prepare a new generation of Navy aviators for peer combat. The set-up, as one pilot says to another, “We’re going into combat on a level no living pilot’s ever seen—not even him.”

This is the stuff of Hollywood, of course, but it contains elements of truth: It turns out the age of air-to-air combat might not be quite over yet. And America’s combat air forces are not quite as ready as they should be: The US Air Force today operates the oldest, smallest, and least-ready force in its history, just as its under-experienced pilots must prepare to take on the most capable rivals any Airmen has ever faced.

As in days of yore, not everyone who climbs into a cockpit makes it home.

These realities face today’s real-life Navy — and Air Force. The Department of Defense, the White House, and the Congress must reckon with that fact as they calculate the investments necessary to ensure US forces are the best equipped, best trained, and most ready in the world.

Unless things change soon, that may no longer be the case.

Roughly half of Americans are too young to recall the last time US pilots faced air-to-air combat threats. We take American air supremacy for granted, but it is not guaranteed. Unfortunately, our national leaders failed to heed the lessons of past wars and squandered that definitive advantage in favor of a procurement holiday over the past few decades.

The combat veterans who taught me to fly in the 1970s survived surface-to-air missiles in Vietnam and cat-and-mouse games with Russian MiGs over Europe and the Northern Pacific. In my own combat history, in Operation Desert Storm and later over Bosnia, I too saw my share of incoming rounds. But three decades hence, few pilots know what that looks like. I’ll tell you: It’s not pretty.

Today’s pilots aren’t getting the cockpit time they need to be ready. Advanced simulators make up for some of the difference, but there’s no substitute for real-life experience. Air Force fighter pilots averaged just 6.8 flying hours per month in 2021, less than a third of what’s commonly viewed as needed. Increasing that by 50% still only gets you to half what pilots saw in my day.

Our aircraft are also aging. Our A-10s are loved for their nose guns and armor, but they’re 40 years old and indefensible against modern air defenses. The F-15s my Air Force pilot daughter flies average 30 to 36 years old; our F-16s average 32. Our bombers are even older. The newest are 27-year-old B-2s, but we also have 35-year-old B-1s, and 60-year-old B-52s. Yes 60. In human years, they’d almost be ready for Social Security.

Our best fighters — the F-22 Raptor and the F-35 Lightning — are too few in number to meet demand from combatant commanders in Europe, the Middle East, and the Indo-Pacific.

When the Pentagon forced the Air Force to cut short Raptor production at half the requirement more than a decade ago, DOD sealed the Air Force’s fate: today, the Air Force has half the Raptors required just as China is bringing online its new J-20 fifth-generation jet. Sadly, Air Force leaders offered earlier this year to retire their oldest Raptors early rather than upgrade them. Likewise, DOD held the Air Force to just 33 new F-35s in their 2022 budget request—even though it’s well established that they must buy 72 fighters annually to avoid further aging the force.

As with the misguided decision to cancel F-22 in 2009, we may not feel the dire consequences of this decision until several years pass. But by then, it may be too late to overcome. Because of delayed and cancelled procurements over the past 20 years, the Air Force is now faced with an impossible choice: Keep the planes it has, even those of decreasing value in a peer fight, or retire them in the hope that money saved now will pay for new aircraft five and 10 years down the line.

Given the rigid topline afforded to the Air Force and competing priorities to fund nuclear modernization, new tankers, new fighters, and new battle management technology, it’s no surprise Air Force Secretary Frank Kendall finds himself in a pickle. Unless the nation invests billions more in our Air Force, this backbone of our military will continue to erode.

Want to see what happens when you fail to train your pilots and maintain your military hardware? Look no further than Ukraine, where wrecked Russian jets now litter the landscape. Russian President Vladimir Putin’s ill-conceived invasion was built on a false sense of confidence about the quality and readiness of his forces. It’s not just about having the weapons. You must train with them and repair them. Constantly.

Russia, of course, is hardly America’s chief challenge. While the US dithered over modernizing its Air Force, China invested, aiming not just to catch up but to overtake the US. Today, China boasts a growing air force, new 5th generation fighters and bombers, counter-space weapons, and long-range missiles that hold US bases and aircraft carriers under threat.

The Peoples Liberation Army Air Force now rivals the US in size and threatens to do so in capability. That’s line in Top Gun: Maverick about “combat on a level no living pilot’s ever seen” is now uncomfortably close to reality.

According to the Air Force’s 2022 Posture Statement to Congress, “Meeting our obligations to the Nation and the joint force demands we accelerate the transformation from the force we have today to the one needed to meet our pacing challenge. The risks we must address are increasing over time, in both strategic and conventional defense.”

That’s indisputable. Yet service leaders lack the maneuver space to spend what’s needed to rebuild our decaying force. We teach pilots to fly in the same 55-year-old T-38 trainers from my generation, planes that are so plagued by engine issues that the Air Force can’t teach pilots fast enough to meet demand. Once they’re through that phase of training, finding new combat pilots the flight hours to become combat ready is another impossible challenge.

The Air Force’s motto has long been Fly, Fight and Win. But when pilots don’t fly, they’re not capable of fighting—let alone winning. We owe it to our young, willing volunteers to never put them in such a dire position.

The fact is, America needs 60 combat-rated fighter squadrons to meet the obligations defined by the National Defense Strategy. It has just 57, and as noted earlier, most of those airplanes are too old to meet the challenges posed by modern air defenses and rival fighter planes.

I get it—there are not unlimited funds to pay for our national defense. This is where difficult choices and trade-offs must be made. For too long, the Air Force budget has been seen as a bill payer for other things: armor for the Army, satellites for the intelligence community, and so on. That might have made sense in the mid-1990s, but it hasn’t made sense for years, and certainly doesn’t make sense today.

It’s time for America to invest again in its Air Force.

We must commit the resources to ensure our most lethal, most effective, and most important combat force is ready for anything the world might throw at us. In a peer fight, we won’t have years to rebuild our industrial base and field hundreds of new aircraft. We must anticipate the threat and be ready, and only by doing so can we hope to deter aggression by China or others. This means increasing purchases of new aircraft now, not years from now, restoring our investment in flying time and readiness for our pilots, and at the same time investing to develop—and field next-generation weapons.

The Air Force, along with the Space Force, are the two indispensable elements of our joint force. We must invest to ensure they are not only indispensable, but also unparalleled in the world. There is no more cost-effective way to ensure our national security.

Lt. Gen. Bruce Wright (Ret.) is president of the Air & Space Forces Association and a 34-year veteran of the United Air Force. His last active-duty post was Commander, 5th Air Force and US Forces Japan, from 2005-2008.

How collectibles fare in times of inflation. Is a recession inevitable in 2023?