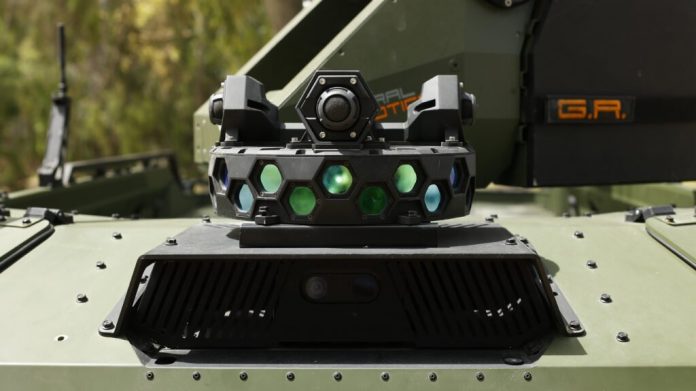 TEL AVIV: Seeing through an offset circle of cameras and listening with four directional microphones, the curious, short black cylinder is designed to give soldiers a single but critical piece of information: where that gunshot just came from.

The system, which can be used in place or bolted onto manned vehicles or unmanned platforms for on-the-move operations, uses short-wave infrared optics and acoustic sensors, along with artificial intelligence processing, to pinpoint the origins of gunshots.

According to IAI, the Othello-P’s 360-degree coverage enables “very short sensor-to-shooter loop closing,” providing protection and neutralization of threats in the area. (One system can cover 180 degrees at a time, but two can be used in tandem for 360-degree coverage.)

“This unique system detects the flash, blast and shock wave of the projectile,” Asher Abish, marketing director for the land division of ELTA Systems, a subsidiary of IAI, told reporters Wednesday.

IAI says the system can work in urban areas, where the usual noise has caused issues for previous GDS systems. “We solved this problem,” Abish said.

He said that the system is capable of detecting an AK-47 fire from a distance of 400 meters in day time and in longer distances at night. An RPG launch, he said, can be detected from 2 km. IAI says that in addition to the warning given to the fighters in the battlefield, the data can be transferred to higher echelons of command so that in case there are multiple fire sources, those can be targeted in strikes.

Col. Itzik Ronen, a former commander of an armored division in the IDF told Breaking Defense that such a system is crucial in the current battlefield situations.

“Most of the fighting these days is performed in urban areas, with may fire sources that in most cases are hidden especially to crews of tanks and APC,” he said. “Another factor: the enemy’s fire comes today not only from a 360 degrees on the ground but also from the air and from the underground. To all this, we have to add the fact that in the multi-dimensional combat many and different types of forces work together and a clear picture of where are the enemy fire sources can add to the mission’s success.”

An Inetview with an Internet Gun Meme LordThe Firearm Blog

Abolishment of slavery throughout the British Empire.