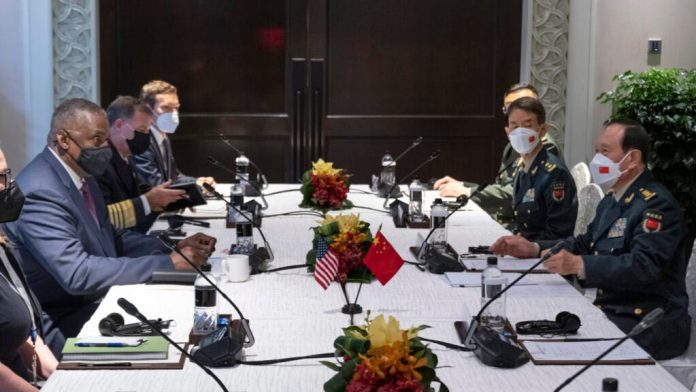 SINGAPORE: While exactly what they said wasn’t made public, US Defense Secretary Lloyd Austin and his Chinese counterpart, Gen. Wei Fenghe, met for the first time at the beginning of the Shangri La Dialogue here and held what were described as frank and constructive talks.

That generally means they disagreed on many things but agreed to disagree. The Chinese requested the meeting earlier this week, an intriguing indication that they believed the meeting would be productive and needed to be held.

Originally scheduled to last 30 minutes, the meeting went on for 56. Wei called for a “healthy and stable major-country relationship,” according to official reports. He also said that, “stable military-to-military relations are crucial to the development of bilateral relations, and the two militaries should avoid conflict and confrontation.”

The US readout said the two discussed the Russian war against Ukraine, as well as North Korea. “Secretary Austin reiterated the point he made when they spoke on the phone that we were watching the situation very carefully and strongly discouraged China from providing material support to Russia for its war in Ukraine,” a defense official told reporters traveling with Austin. The Chinese side, which has been largely mum or quietly supportive of Putin’s war did not mention either topic.

Much of the discussion focused on Taiwan. Wei sharply criticized recent US arms sales to Taiwan, saying they “seriously undermined China’s sovereignty and security interests.” For his part, Austin called on Beijing “to refrain from further destabilizing actions toward Taiwan,” according to a read-out issued by the Pentagon. Austin also restated that — two statements by President Joe Biden notwithstanding — the US has not changed its policies toward Taiwan.

The Global Times, a semi-official English language Chinese newspaper known for its tough foreign policy stances, said of the Taiwan discussion, Wei stressed “the Chinese military will not hesitate to fight, and will resolutely crush any ‘Taiwan independence’ attempts to firmly safeguard national sovereignty and territorial integrity.”

Austin, the US defense official said, also brought up “unsafe, aggressive, unprofessional behavior” on the part of the Chinese military, adding that US officials worry “that the PLA may be attempting to change the status quo through its operational behavior.”

The two leaders brought up the importance of crisis communication, which a DoD readout described as “guardrails” to keep both sides from accidentally escalating any incidents. Austin urged the PLA to more actively participate in such communications, the defense official said, and Wei was “responsive to that.”

The Chinese, surprisingly, held a press conference to discuss the meeting. However, not all media were admitted. Colleagues who attended said little of substance was said. Apparently, when the Americans heard the Chinese were holding a press conference, they briefed the press who traveled here with Austin.

The US defense official said discussions or meetings between the Chinese and other senior US defense officials were possible, including with the chairman of the Joint Chiefs, Gen. Mark Milley, and the head of Indo-Pacific Command, Adm. John Aquilino.

Gamakatsu® Provides Innovative Storage For Anglers on the Go