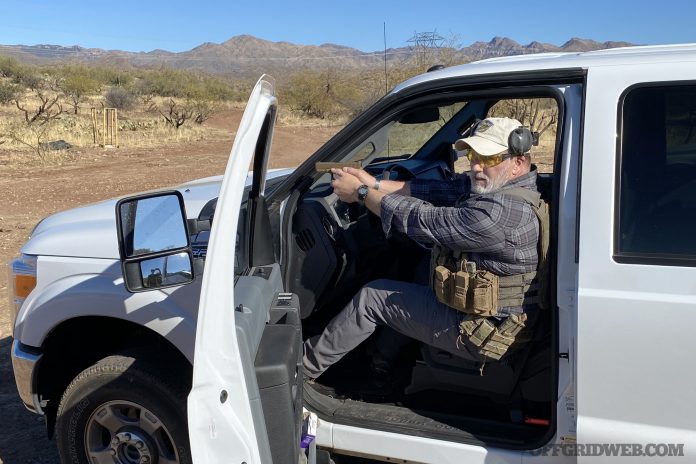 How realistic is your training? This is a question you should be asking yourself frequently, since unrealistic training can be detrimental to your ability to deal with a survival situation. When it comes to firearms, we often train on a flat range, standing in a booth and shooting slowly at static targets. In a real fight, it’s important to use cover and concealment to your advantage, move while shooting, and communicate with other members of your “squad” (teammates, family, friends, etc.). who may be present at the time. I recently attended a two-day class that focused on each of these skills, centered around a common context: driving a vehicle. The Guerrilla Mentor Hostile Encounters class was based on head instructor Timothy Lacy’s experience working as a private security contractor in war zones overseas.

Above: After spending years in the Army, law enforcement, and as a security contractor, Timothy Lacy used his experience driving through hostile areas to teach students how to stay safe in worst-case scenarios on the road.

Lacy often had to escort VIPs through hostile areas, and if necessary, return fire and extract the VIPs. You may be thinking that this isn’t relevant to armed civilians, but I’d beg to differ. Whether you find yourself in the path of a road-raging psycho who’s angrily approaching with a gun, you get caught up in the middle of a mass shooting or gang violence on the street, or you’re rolling up to a dangerous situation as a professional first responder, many violent incidents take place in (or near) a vehicle. And although you probably won’t be leading a fire team or escorting government personnel, you might be working alongside an armed spouse and corralling your own scared children.

Above: At the beginning of the class, Lacy demonstrated how to shoot from a vehicle without shattering the windshield or leaving the driver’s seat. This is useful if you need to escape to a safer location immediately after returning fire.

At the beginning of the class, we discussed using a vehicle as cover or concealment — it’s almost always the latter. Most bullets will pass right through both sides of a car or truck and remain lethal. The engine block and wheels/axles provide some protection, but less than you’d think. Cars are also big targets that draw fire like a magnet. If driving away immediately is possible, that’s the obvious choice. Otherwise, it’s best to quickly move back from that bullet magnet, use it to obscure yourself from view, and loop around to a position where you can shoot back or find real cover.

Above: Although unarmored civilian vehicles provide visual concealment, they don’t provide much protective cover from incoming fire (especially rifle rounds). The engine block and axles/brakes/wheels can offer some last-resort cover if there’s nowhere else to run.

For a practical exercise, we loaded groups of students into pickup trucks and simulated rolling up to a scenario. As soon as the threat was identified, the “tactical commander” (TC, a term from Lacy’s days working private security details) in the shotgun seat yelled “Contact front!” The TC then provided clear instructions to the group — “drive” if we could leave the area, or “vehicle down” if we were immobilized. In the latter case, he followed with “evac [direction],” leading everyone to reply “moving” and bail out of the truck on that side. Once each student was clear of the truck, we took up firing positions and yelled “set” to indicate this. If anyone needed to move, they announced “moving” and waited for the “move” confirmation from the nearest team member before taking up a new position. We moved deliberately, being careful not to cross lines of friendly fire, and bounded (i.e. leapfrogged) back to a secondary vehicle while other members provided covering fire. When we were all set around that vehicle, the TC shouted “recover.” We jumped in, each yelling “up” once we were seated; TC gave the “drive” command once everyone was inside, and the driver peeled out.

Above: By the end of the class, Lacy covered more advanced techniques, such as safely extracting a scared VIP from a damaged truck. In civilian context, this “VIP” might be a friend or family member.

After several dry runs, we ran live drills. As we got more comfortable, radios were incorporated to communicate with our secondary evac vehicle. We even ran scenarios where an unarmed, cowering VIP had to be forcibly removed from a disabled car. Your ability to manage that particular complication will be valuable if anyone in your vehicle (e.g. kids) hasn’t been thoroughly trained how to react if a violent incident occurs.

As a civilian, it’s unlikely that I’ll be riding with four kitted-out friends when a road rager decides to pick a fight. However, the principles learned in this Hostile Encounters class translate well to personal and family self-defense. I feel more comfortable moving and shooting around a vehicle, and I know that if I’m with my wife or someone else who is armed, I’ll be able to coordinate with them to escape or fight back. For more information on future classes with Guerrilla Mentor, go to Facebook.com/guerillamentor or follow the Instagram page at @guerrilla.mentor.