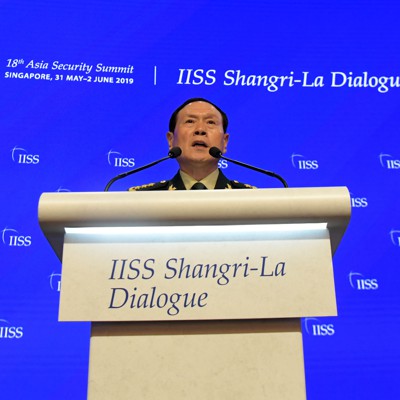 World leaders gathered at a major Asian security conference this weekend warned that the distant Russia-Ukraine war, a conflict 5,000 miles away, has significant implications for the Pacific and the international order, citing China’s recent provocative actions and statements about the future of Taiwan.

At the Shangri-La Dialogue, an annual conference of defense ministers in Singapore focused on security in the Indo-Pacific region, leaders said the war in Ukraine has created concerns about everything from food to international norms and rules. They painted the fight with Russia as a fight for those rules and boundaries. Taiwan, like Ukraine, is threatened by a larger neighbor who views it as part of its territory, something a top Chinese official made clear in a combative speech on the closing day of the conference.

“Let me make this clear,” Chinese Minister of National Defense Gen. Wei Fenghe said. “If anyone dares to secede Taiwan from China, we will not hesitate to fight. We will fight at all costs. And we will fight to the very end.”

In previous years, Asian ministers at the event hosted by the London-based International Institute for Strategic Studies, or IISS, would give carefully measured speeches that reflected how their governments must balance vital economic ties with China and security agreements with the United States and its allies. This year, ministers came with clear warnings to Beijing — and each other.

“No country or region in the world can shrug this off as someone else’s problem. It is a situation that shapes the very foundations of the international order, which every country and individual gathered here today should regard as their own affair,” Japanese Prime Minister Fumio Kishida said through a translator at the conference’s opening keynote. “Ukraine today may be East Asia tomorrow.”

“Europe and Asia have a shared stake in each other’s security. Putin’s territorial war shows how our continents are connected,” said Kajsa Ollongren, minister of defense of The Netherlands. “There is no far away. A war in one part of the world affects people across the globe.”

Ukrainian President Volodymyr Zelenskyy, speaking remotely from Kyiv, argued that the war is “about globally important things,” despite Russia claiming it is about NATO enlargement and the role of the West in Europe.

“Please remember that this support and this attention is not only for Ukraine, but for you as well to ensure that our world and your future is safe,” Zelenskyy said. “It is on the battlefield in Ukraine that the future rules of our world are being decided.”

During his remarks, Zelenskyy quoted Lee Kuan Yew, the founder of Singapore, saying that, “if there had been no international law and the big fish ate the small fish and the small fish ate shrimps, we would not have existed.” He also wore a t-shirt showing a girl spray painting the flag of Ukraine. The NFT artwork was designed by Ava Soh, a Singaporean girl who Zelenskyy said wrote to him asking him to wear the shirt, which is being sold to raise money for Ukraine.

Russia’s full-scale invasion of Ukraine in February has prompted world leaders to draw parallels to a potential Chinese invasion of Taiwan, hoping that the international community’s unity in condemning Moscow would deter Beijing from launching a similar attack. Many of the actions the West has taken to isolate Russia and help Ukraine, including sanctions on Russian oligarchs,  weapons transfers to Kyiv, and large humanitarian and economic relief packages, have been framed as also sending a message to Chinese leader Xi Jinping.

“What has stood out to me at least so far from the Dialogue is how much the war in Ukraine has shaped the discussion here,” Ben Schreer, executive director of IISS’ Europe office, said in a video clip. “If war can break out in Europe, it can also break out in the Indo-Pacific. Therefore, the need to do everything we can to prevent it has been one of the resounding themes of the Dialogue so far.”

There’s some concern that international unity around Ukraine is not enough to stop China, especially since allies have declined to send their troops to defend Ukraine to avoid escalating conflict with Russia. Some U.S. lawmakers have called for sending Taiwan additional weapons and equipment now so they are better prepared to defend themselves ahead of any conflict with China.

Defense Secretary Lloyd Austin reiterated that the United States does not support Taiwan independence from Beijing, but would support Taiwan in a conflict with China by helping Taiwan build its own self-defense capability and maintaining American military power to respond to “force or other forms of coercion,” if needed.

“As part of our one-China policy, we will continue to fulfill our commitments under the Taiwan Relations Act,” Austin said. “Our policy hasn’t changed. But unfortunately, that doesn’t seem to be true for the [People’s Republic of China].”

Wei sharply criticized the United States in his address to the conference, calling Austin’s remarks “smearing accusations, even threats, against China,” and arguing that the administration’s strategy for the IndoPacific is intended “to create conflict and confrontation.” The public rebuke comes less than a month after President Joe Biden said the United States would respond “militarily” if China invaded Taiwan, a remark his administration quickly walked back as no change in policy.

Wei, who met with Austin on Friday, said it would be “a path to death” if Taiwan declared its independence.

Defense ministers also highlighted that the Russia-Ukraine war is impacting Asia’s food supply, as Ukraine is unable to export crops such as wheat, oats, and sunflower oil. More than half of Ukraine’s annual wheat exports are sent to Asia, according to The Diplomat. Indonesia, where wheat-based foods like instant noodles play a large role in the diet, imported one quarter of its total wheat needs from Ukraine last year, Asia Sentinel reported. The shortage is driving up prices and making goods more difficult to find.

John Chipman, IISS director-general and chief executive, said the food shortages are just one factor that proves that “success in Europe is vital to success in Asia.”.