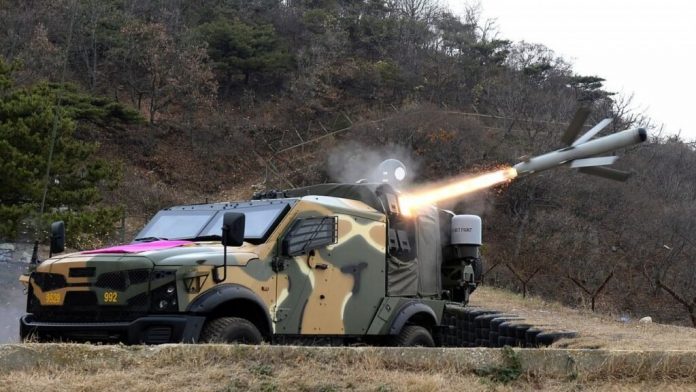 TEL AVIV: Israeli firm Rafael has unveiled a new version of its Spike missile, and has teamed with Lockheed Martin to market the system in the US.

The two firms plan to demonstrate the weapon for US forces in early 2023, Rafael officials claimed June 9, while pledging that production would also begin early in the next calendar year.

Branded as the Spike Non-Line-Of-Sight missile system (NLOS) 6th generation, Rafael officials told reporters at an in-person briefing that the new system comes with a number of new features, starting with the fact it can be launched in salvor of up to four missiles at once, with flexible control of the weapons.

“Each of the missiles can be directed in the final phase of its trajectory to hit different targets in the area,” Zvi Marmor, head of the precision tactical weapon systems division in Rafael, said. “This capability crates an immediate effect.”

In addition, control of the missiles can be transferred between battlefield platforms midflight, Rafael claimed. That should, at least in theory, allow for more precise targeting and on-the-fly changes of the operational scenario.

“For example, if a helicopter launches the missile against a high-value target but continues flying outside the threatened area, a ground vehicle in that area or attack zone vicinity can gain control of the launched missile and navigate it toward the original target,” Marmor said. “This transfer of control enables seamless collaboration between systems and an uninterrupted operational pace.”

In a statement, the firm also played up what it described as “image matching capabilities,” which the company says would allow for better target acquisition.

“For instance, if a number of enemy tanks are identified in the vicinity, the Target Image Acquisition capability allows the NLOS to distinguish between the vehicles and identify the commander’s tank, or the most important hostile asset and strike it directly,” the company said in a statement. “This allows for minimized collateral damage and higher effectiveness, especially in more dense urban settings.”

Rafael claims the weapon now ranges up to 50 km when launched from a helicopter and up to 32 km from land and naval platforms. When asked if the new version can be carried by fixed-wing aircraft or UAV, the Rafael official said that a strategic UAV like the Heron–TP made by Israel aerospace industries can carry the missile.

Rafael and Lockheed have been teamed since 2012 to bring try and get Spike onto US military equipment, with some success. Spike NLOS currently serves as the interim long-range precision munition for the AH-64 Apache helicopter, while Lockheed delivered a Joint Light Tactical Vehicle equipped with the system to US Special Operations Command in May, a first for the company.

Rafael told Breaking Defense that so far the US Army has purchased 450 Spike NLOS missiles to equip 18 Apaches.

The companies are pitching the weapon to the Army for its Future Attack Reconnaissance Aircraft (FARA) fleet under the Long Range Precision Munition (LRPM) program requirement. The companies will participate in a shoot-off with other competitors for the LRPM later this year, which will see Rafael/Lockheed using the current generation of Spike weapon.