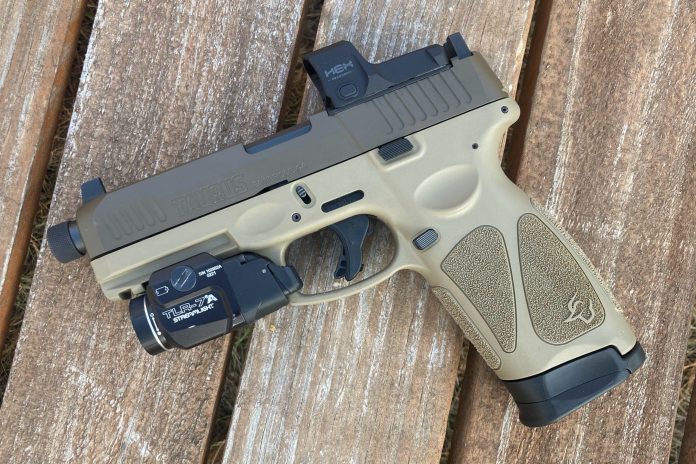 Taurus has added to their G Series of handguns with the new G3 Tactical. This firearm is similar to the original G3 except with the addition of suppressor height sights, a threaded barrel, and a slide that is milled to mount a micro red dot. With an MSRP of $583, you would be hard-pressed to find a gun with those features for less.

When I picked the G3 up for the first time I immediately noticed the aggressive grip texturing that was present right from the factory. This is a feature I appreciate and it’s something most guns lack. Just last week I had to stipple my new Glock 19 because, although I love Glock, their grip texture is not as aggressive as I would like.

The slide has a Cerakote finish and includes front and rear serrations which help with manipulation. The front serrations in particular are a great addition because I prefer to rack the slide from the front when I’m shooting a pistol that has a red dot.

The G3 Tactical comes with four different mounting plates to accommodate the majority of current micro red dot sights; including but not limited to Docter, Vortex Venom, Trijicon RMR, Holosun 407c, Leupold Delta Point, and C-More STS2. The mounting plate design itself is quite innovative. The screws mounting the optic go straight through the plate and into the slide. This should make for an exceptionally strong mount, but most stock mounting screws are too short to reach through the mounting plate, so Taurus has included a single set of each size.

It took me about 15 minutes to mount my red dot. It would have been faster but the supplied Allen wrench broke when I tried to remove the screws from the slide. After finding another Allen I discovered why the screws were so difficult to remove. Taurus had used red Loctite instead of blue. Red Loctite is the higher strength formula and is usually only used in more permanent applications.

The suppressor height sights are flat black without tritium, fiber optics, or color-filled dots to catch your eye while aiming through the red dot. They are there if you need them, but they remain unnoticed if you don’t. Personally, I prefer this type of irons for use with an optic.

Adding a suppressor isn’t an issue because the 4.5” barrel comes threaded 1/2×28, one of the most common thread pitches. Also included in the bag is a second recoil spring assembly that is tuned for shooting suppressed.

One of the most unique features of the G Series pistols is the “re-strike capability”. This means that the trigger can operate in double action as well as single action. This is something I have never seen on a striker-fired pistol until now. The idea is that you can pull the trigger a second time and re-strike the primer of a round if it did not go off after the first trigger pull.

The two 17-round MEC-GAR mags seem to be good quality and they didn’t have any issue reliably feeding multiple types of 9mm ammunition. Yet, the magazines are one of my least favorite parts of this gun because the standard magazine uses a plastic spacer to extend the length of the grip and this spacer likes to slide around on the mag whenever it is not in the gun. Over insertion typically isn’t an issue with double stack mags so I just removed the spacers from both of mine. This leaves the magazine sticking out about half an inch past the mag well, which is fine for the range, but I wish they would have included a flush-fit 15-round mag in addition to the extended 17.

I had a great time shooting the G3 and had no problem making decent groups at ten yards with every type of ammunition I fed it. The trigger breaks at a clean 5.5 pounds with surprisingly little creep and the recoil impulse is fairly smooth.

One issue I had while shooting was that once every 20 rounds or so the slide would not go fully forward while chambering a new round. That ⅛ inch was enough to prevent full lockup and keep me from firing the next round. A quick bump to the slide from the heel of my hand and I was back in business. While being a small malfunction, one in twenty is extremely frequent and makes me wary of considering this gun for my personal defense. Hopefully, the gun will wear in, and this issue will resolve itself but only time will tell.

I love seeing new features and innovations incorporated into budget products and think Taurus has done a great job with the G3 Tactical. If you want to see the full spec sheet or find where to buy one click the link HERE and be redirected to Taurus’ website.

About the author:
Garrett Negen has a wide variety of skills and interests. His profession as an engineer in the steel industry falls right in line with his hands-on approach to his hobbies. Whether it’s ham radio, shooting, hunting, etc., Garrett is always happy when he has a project to work on. You can keep up with his current projects on his YouTube channel “Thrifty Operator”

US Weighs Escalation Risk As Ukraine Asks for Longer-range Missiles