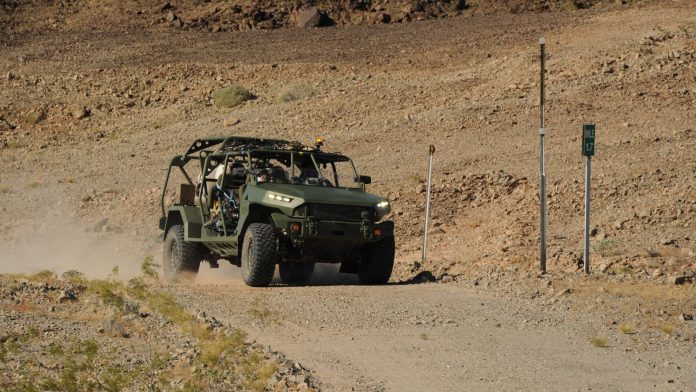 The Infantry Squad Vehicle currently under test at U.S. Army Yuma Proving Ground promises to give Soldiers an opportunity to arrive to a fight faster, rested, and ready. (Mark Schauer/US Army)

GM Defense International will expand the company’s footprint outside of the US and will “support of U.S. allies and partners’ transition to a more electric, autonomous and connected future,” a press release said. The news, announced as part of Eurosatory 2022, is the latest example of the growth of the young defense company, a subsidiary of automaker giant General Motors, since it re-entered the defense market in 2017.

“Forming GM Defense International will drive our continued expansion as we leverage GM’s rich legacy of innovation in support of global defense and government customers,” said Steve duMont, president of GM Defense, in a statement. “As a non-traditional entrant to the defense market, we continue to receive positive feedback on our ability to bring commercial technologies forward at the speed that our customers require in these complex times.”

Earlier this month, GM Defense announced that it had partnered with GM Canada to expand its business north. DuMont said the new entity would target the North America, European, Indo-Pacific and Middle Eastern markets. In the United States, GM Defense has contracts with the U.S. Army and the State Department. The company won a $214 million contract with the Army to build the Infantry Squad Vehicle, a small troop transport vehicle.

Apparently eyeing the European market specifically, the company timed the announcement to coincide with Eurosatory, one of Europe’s largest defense conferences, where the firm is displaying its Infantry Squad Vehicle and its Off Road Concept Vehicle.

Later today, new Senate legislation is expected to be introduced that would require the Pentagon to aggressively speed up its purchase of electric vehicles for its non-tactical fleet.