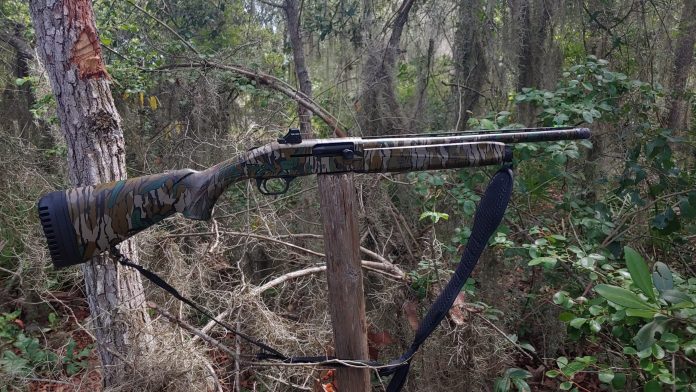 Let me start by saying I’m not a turkey hunter. That’s why when Dan assigned me the Mossberg 940 Pro Turkey shotgun at SHOT Show, I wasn’t expecting much that would hold my interest. What I found was a truly awesome shotgun that will not only take gobblers with ease, but would also be a practical home defense shotgun and a mighty nice tactical shotgun.

Mossberg produces both an 18.5-inch and 24-inch versions of the 940 Pro Turkey. The 24-inch barrel with its slightly higher weight likely make the weapon front-heavy, but more controllable for taking gobblers. The 18.5-inch variant, which I tested, is more maneuverable and can pull double duty as your gobbler gun and your home defense gun.

Breaking Down the 940 Pro Turkey

First and foremost, I love the vintage Mossy Oak camo pattern. I understand turkeys have great eyes and camo finishes are a must when hunting these perceptive creatures.

Beyond the paint job, the 940 Pro Turkey features the same upgrades that the popular 940 series brought to the earlier 930 shotguns. These include the oversized charging handle, the larger bolt release, and the pain-free loading port.

Hot damn, the loading port of the 930 could catch your thumb and take enough blood for a full CBC if you weren’t pay attention. The 940’s port is a big improvement. The bolt release on the gun Mossberg sent me is smaller than the one on their website and smaller than the one at SHOT, and I’m not sure why.

The safety is standard Mossberg 500 style tang safety, but is seemingly much more aggressive. That makes it easier to flip on and off with gloves. The synthetic stock is pretty standard, but allows adjustable length of pull via spacers. It’s similar to the Magpul SGA stocks and allow you to get the length right where you want it. You can adjust the length of pull from 13 to 14.25 inches, allowing a comfortable fit for just about any size shooter.

You can also adjust cast and drop, but I didn’t have a problem with the factory setup as a right-handed shooter.

I went with a Holosun 507K to make the most use of the platform.

Mossberg includes a simple two-point sling with a wide adjustable padded end for support and comfort. The 940 Pro Turkey ships with an X-Factor XX-Full Turkey choke, too.

The choke is, of course, removable and for defensive shooting, I’d use a cylinder bore choke, which is easy to find and commonly available. Turkey hunters get the maximum range possible with the XX-Full choke, and this allows for accurate and precise headshots on gobblers.

The tube magazine holds four rounds, but is plugged from the factory. That plug is easy to remove, and you can get up to the actual capacity of the gun quickly enough. Mossberg’s 940 series shotguns are compatible with 930 magazine extensions, and you could make this a 7+1 in reasonably short order if you choose.

Lighting It Up with the 940 Pro Turkey

I reached out to a friend of a friend who is a dedicated turkey hunter. He had actual turkey loads, which I failed to find enough of for testing. Admittedly a number of his loads were 3.5-inch shells, and the Pro Turkey maxes out at 3-inch shells.

To him, that was a disappointment, but we fired off some Remington Nitro Turkey loads and patterned them inside a paper plate. Even out to 60 yards, the pattern delivered a hefty load of pellets, more than enough to put a turkey out of commission. I had no idea turkey hunters reached out that far, but the 940 Pro Turkey put enough pellets into a tight enough grouping to get a thumbs up from our experienced turkey hunter.

What was enjoyable to me, our turkey hunter, and other friends who shot the gun was the low felt recoil of the Mossberg 940 Pro Turkey. It delivered a short and relatively soft push, at least soft for a 12 gauge. Even with full-powered turkey and buckshot loads, the 940 Pro Turkey produces reasonable recoil that isn’t punishing.

The front grip of the gun is heavily textured and provides an excellent surface to use a push/pull method of recoil mitigation. The gas-operated nature of the semi-automatic gun helps tame recoil too, and makes the shotgun controllable, more so than the Mossberg 930. Heck, it’s up there with the Benelli M4 and still weighs only 7.25 pounds.

Laying Down a Load of Lead

Mossberg installed a very nice trigger in the 940 Pro Turkey that’s both crisp and light. It has the slightest takeup, followed by a very slight, crisp break. That helps with 60-yard accuracy. The reset is short, but hardly tactile and just barely audible. The XL-sized controls make manipulating the weapon fast and easy, and that great big charging handle is a welcome touch.

While the bolt release isn’t as big as the SHOT model I saw, it’s large enough and easy to engage. I used the gun as more of a combat/home defense shotgun than a turkey gun. Those big controls shined, and I was thankful not to be pinched with every reload. The ejection port is also huge, making it easy to do an emergency port reload and do it swiftly.

The controllable design ensures fast follow-up shots, and the addition of a red dot makes it easy to hit targets and to get back on target quickly. I took out three clay pigeons in less than 1.5 seconds from the low ready with the Pro Turkey and birdshot. Dropping two rounds of buck onto a man-sized target in less than 1.5 seconds is easy, and how often do you need two rounds of buckshot to solve a shotgun problem?

The Mossberg 940 Pro Turkey has a vent rib placing the sight a little bit above the barrel. This solves the Mossberg problem of putting the bead on the barrel and the shotguns appearing to hit high when aimed. Using just the iron sight, it’s flat-shooting and hits right where you want it. With a properly zeroed red dot, it does the same.

The more I see, the more I’m becoming convinced that the Mossberg 940 Pro series might now be the best American shotgun on the market. At least as far as semi-autos go. Mossberg might bring some competition to the Beretta/Benelli domination of the market. The adjustable LOP, red dot-ready configuration and oversized ergonomics make the Mossberg 940 stand out. The Pro Turkey models certainly show what the 940 series are capable of.

Reliability * * * * *
The Mossberg 940 Pro Turkey ate through all manner of loads without complaint. That includes turkey loads, cheap sporting loads, and both low recoil and standard buckshot. I’ve fired more than 500 rounds without a single issue.

Accuracy * * * * *
The raised vent rib puts the point of aim and point of impact dead-on. The ability to add a red dot is a nice touch and makes it easy to hit those gobblers at 50+ yards.

Ergonomics * * * * *
Mossberg revamped the ergos on the 940 shotgun series to make them bigger, more aggressive, and more controllable. Plus, the ability to adjust the LOP is a game-changer.

Overall * * * * *
The Mossberg 940 Pro Turkey is a top-of-the-line American shotgun. It competes with the Beretta 1301 and, to me, outdoes it with the increased ergonomics and its optic-ready configuration.