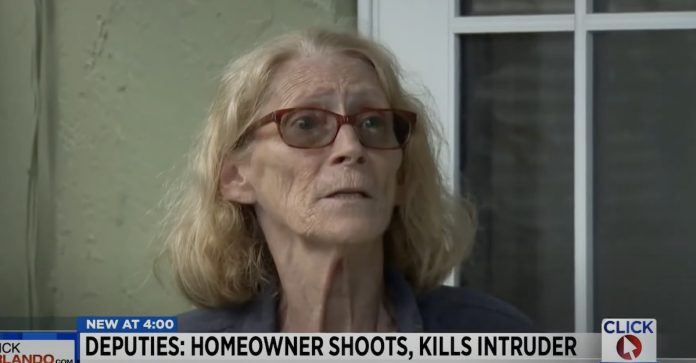 The Orange County Sheriff’s office said that deputies were called to the scene of the crime, the 6500 block of Bentwood Street at around 12:30 pm, for a burglary in progress.

Deputies identified the intruder as 38-year-old Ezequiel Rosario-Torres. Following the shooting, Rosario-Torres was taken to a local hospital where he was pronounced dead.

Virginia Morrison, the homeowner, recalled that the man entered her home, startling her. She asked him to leave, but he refused. The situation became physical and that is when she shot him.

Morrison told officers that she had never seen the man before.

“Something wasn’t right with the man,” Morrison told Orlando News6. “He had a blank look on his face.” She also stated that he didn’t say anything to her during the invasion.

Morrison believed that her fiance was outside, so the door to her home was unlocked. The man stepped into her home and Morrison asked the man who he was and what he wanted. The man did not answer.

Morrison asked him to leave several times, and even tried to fight him off with a broom, but this had very little effect on the intruder. Morrison then told the man she was going to get her gun.

“I said, ‘I’m getting my damn gun.’ So I went to my bedroom and got my gun and I went out the back door and I came to the fence and he sees me and he starts toward me,” Morrison said, recalling the events. “I fired a shot above him, then said, ‘Back off, dude. I’ll shoot you.’ And he kept coming toward me, so I shot him.”

Morrison said that that was the first time she used a gun in self-defense. “I’ve never had this happen in my life and I’ve never had to pull a gun on somebody.”

Morrison warned others to be careful. “Keep your doors locked. Anybody can walk into your house now,” she said.

“I killed a man. I didn’t intend to do that. I’m trying to protect me and (my fiance),” she added.

An investigation is ongoing, and the state attorney’s office will determine whether charges will be filed in this case.

A Picture from History: Dan Daly