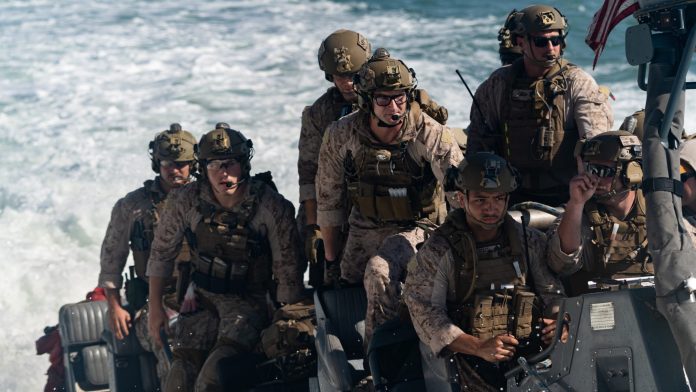 The March 2020 release of Force Design 2030 was billed as a new direction for the Marine Corps — one met almost immediately with backlash from retired officers. Last month, the Marines released an update to the document, with some notable changes. Having taken the time to compare the two documents, author Mark Cancian of CSIS offers up the following analysis of what changed and why in the last two years.

The Marine Corps’ recent update to its Force Design 2030 [PDF] arrives as the Corps’ intellectual civil war hits full volume. Ignoring the critics, the update continues FD 2030’s basic approach of building forces with reconnaissance and long-range precision strike capabilities for operations within an adversary’s weapons engagement zone and divesting capabilities regarded as unneeded or obsolete. But there are several areas where the update appears to at least acknowledge the critics’ concerns.

When Gen. David Berger became commandant in 2019, he set a new course for the Marine Corps. His initial Commandant’s Planning Guidance [PDF] laid out concepts and some initial changes. Details came out in March 2020 in Force Design 2030, and CSIS published a detailed analysis of that initial plan. The Marine Corps elaborated on that initial design in subsequent articles and speeches.

FD 2030 structures the Marine Corps to be a “stand-in force” of “small but lethal forces, designed to operate across the competition continuum within the contested area as the leading edge of maritime defense in depth. They operate with low signature, are mobile, and are relatively simple to maintain and sustain. The enduring function is to help the fleet and joint force in the reconnaissance and counter reconnaissance battle.” Implementing this new vision changed many long-standing elements, most visibly the elimination of tanks. To pay for the new structure, the Marine Corps cut about 15,000 troops, nearly reaching the lowest level since the Korean War.

FD 2030 engendered an “intellectual civil war” in the Marine Corps driven by criticisms from retired officers that Berger’s effort is too focused on the Western Pacific, undermines traditional combined arms operations, makes the Marine Corps too small, and relies too heavily on unproven operational concepts. The two sides have been lobbying op-eds at each other for several months.

RELATED: Ending the civil war over the future of the US Marine Corps

With the update having been out for about a month, we have now had time to digest the biggest changes in the document. These changes can be divided into three groups: structure, acquisition, and personnel and policy.

To come to a final number, experimentation on three different structures will continue. However, all will emphasize the deployment of small teams and the incorporation of long-range precision fires.

Tanks. All Marine Corps tanks are gone, and the update contains no plan to replace that capability. Continuing this skepticism of armored vehicles, the update hints at cuts to the reconnaissance vehicle fleet, which is criticized as “too limiting.”

The retired generals have harshly criticized the changes in artillery, arguing that the Marine Corps is moving away from its historical and successful employment of combined arms. This will be a continuing point of contention, and artillery structure remains a work in progress.

Marine Littoral Regiment (MLR). Under the original FD 2030 document, new unit include a headquarters, a battalion-sized ground combat element with long-range missile assets, an air defense element, and a logistics element. It has been seen as the basis for conducting the new concept of operations in the Western Pacific. The 3rd Marine Regiment on Hawaii has already converted to this configuration, and the plan is that two additional regiments, the 4th and 12th Marines, would do so also.

However, in the updated document, the Corps seems to be hesitating. The update states, “Feedback from FMF [Fleet Marine Force] exercises has shown that, in most cases, task-organized Marine Air Ground Task Forces perform stand-in force missions. The MLR is a component of that larger effort.” There had always been questions about why the Marine Corps needed a new and permanent organization rather than using its traditional approach of task organization. Unclear is whether this signals a change in MLR structure, a backing away from future conversions, or simply a modification in doctrine.

The update also notes that “We focused the MLR too much on lethality and not enough on sensing.” This might signal a change in structure whereby some of the ground combat force converts to intelligence, surveillance, and reconnaissance units. However, cutting more combat power from the MLR will trigger more concerns from the retired generals since establishment of the MLR already cuts considerable firepower (two battalions) from the unit from which it was built.

Further, the update speculates whether a reconnaissance or artillery battalion might be a better base than the infantry battalion. That would mark a substantial change in the MLR structure, removing its ground combat capability and further emphasizing fires.

Aviation. The V-22 fleet will still be cut, but instead of having 14 squadrons of 12 aircraft, the update specifies 16 squadrons of 10 aircraft each ― providing more flexibility but losing another eight operational aircraft on top of the 36 already cut (which go mostly to the training base).

The Marine Corps still plans to increase UAV capabilities “dramatically,” but only 18 MQ-9s are currently programmed. Ultimately, the Marine Corps wants to buy a ship compatible medium altitude long endurance UAV, but that is far in the future. In the armed UAV fleets, the Marine Corps will remain far behind the Army (201) and Air Force (351) for the foreseeable future. 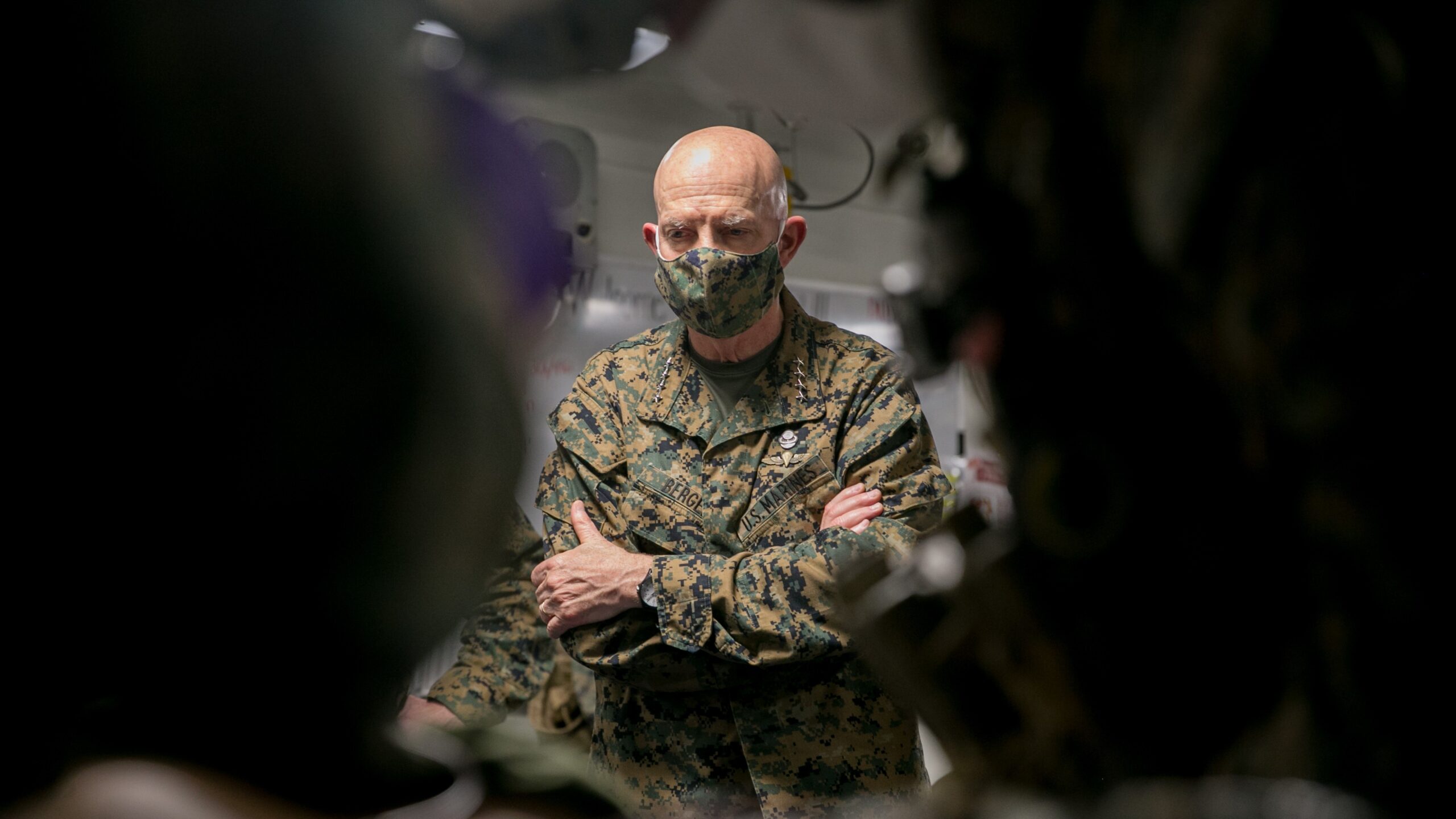 As a result, the Pentagon’s latest shipbuilding plan [PDF] pauses construction of large amphibious ships after 2023, so the number falls to 24 over time. Instead, the Navy will build light amphibious warships at the rate of one to three a year, with a total requirement of about 35. The Marine Corps has argued that peacetime deployments justify large amphibious ships, but that rationale has not been enough to support multibillion-dollar investments. (Fully describing the “dumpster fire” that constitutes amphibious fleet planning today requires a full article; it is an unresolved issue that a forthcoming amphibious fleet study may or may not resolve.)

In the near term, the Marine Corps will experiment with auxiliary ships and leased ships to understand better how to move small teams from the Marine Littoral Regiment around the Western Pacific.

One minor change is that the light amphibious warfare program is now being referred to as the landing ship, medium (LSM). It is not clear what difference in meaning the new terminology is intended to convey.

Personnel policy. The Marine Corps published Talent Management 2030 [PDF] as the personnel policy complement to FD 2030. The update reinforces some elements but modifies others.

Transparency. Wargaming and experiments have been a key element in shaping FD 2030, but virtually all information has been classified. The Marine Corps now plans to publish unclassified executive summaries of its wargames beginning in November 2022.

New rhetoric. Criticism by the retired generals has pushed the Marine Corps to change the way it describes some elements of FD 2030. The most prominent change is that FD 2030 is now described as a global strategy, not just focused on China and the Western Pacific: “We have consistently said that a modernized Marine Corps must still be capable of performing global crisis response operations.” It ascribes the misunderstanding to a failure to properly communicate the concept of FD 2030.

This is not really true, however. The early Marine Corps documents on FD 2030 focused tightly on China. For example, the commandant’s original planning guidance cites China six times, INDOPACOM six more times, Russia twice, and Iran once. No other geographical areas are mentioned. Berger’s 2019 War on the Rocks article on FD 2030 cites China six times with no mention of other challengers. Indeed, the first third of that article describes the threat posed by China.

The update also ties FD 2030 to efforts by the previous commandant, Gen. Robert Neller, to reassert the Marine Corps’ maritime connection and goes further, tying FD 2030 to the “warrior” series of experiments in the 1990s. This new emphasis on continuity was likely in response to criticisms that FD 2030 was disconnected from previous work.

From the beginning, Berger has stated that FD 2030 would adjust over time based on analysis and experimentation. Future updates will therefore have additional changes. Looking ahead, the update identifies logistics as the major unresolved issue since resupplying widely distributed units inside an adversary’s defensive zone is extremely challenging.

The bottom line: as experiments and analysis continue, the Marine Corps will implement further modifications to FD 2030. However, the intellectual civil war will continue as the current commandant has signaled that, despite changes in the implementation details, he is committed to the new concept and will not change direction in any fundamental way.

Mark Cancian, a member of the Breaking Defense Board of Contributors, is a retired Marine colonel now with the Center for Strategic and International Studies.

Gear Rx: Can You Waterproof Cotton?