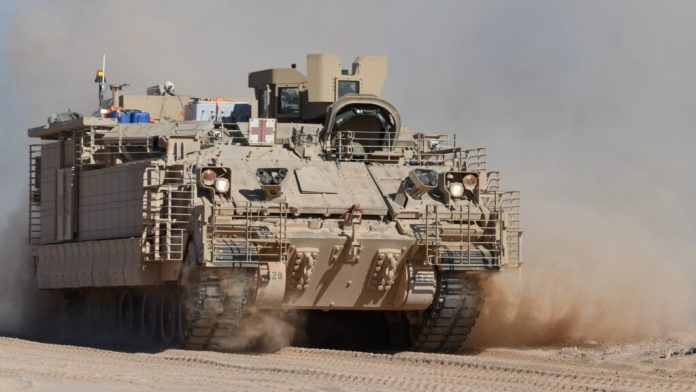 The Armored Multi-Purpose Vehicle, one of the Army’s top 35 modernization priorities, is set to replace the service’s M113armored personnel carriers, which have been used since the 1960s. BAE Systems is currently producing 12 vehicles per month, according to Bill Sheehy, the company’s AMPV program manager.

“The Army has to look and say, ‘Can BAE systems meet the pace that we need to field out units?’ Our ability to hit full rate pace now and sustain it, as we’ve done for the past four months, feeds into that [full-rate production] decision,” Sheedy said in an interview with Breaking Defense at Eurosatory in Paris.

BAE has reached this point in the AMPV after overcoming quality control and COVID-related issues at its York, Penn., plant. More recently, the company fixed issues with the advancing welding machines that required Defense Contract Management Agency inspectors to receive training so they could inspect aluminum welds on the hull.

Last October, the Army and BAE announced that the vehicle started meet its low-rate initial production requirements. Army fiscal 2023 budget books show that the service is currently shooting for a full-rate production decision in the first quarter of FY23, which means the Army would certify that BAE’s vehicle adequately meets the Army’s requirements for manufacturing, performance and sustainment, and that the program can move progress forward to equipping units. Sheehy said that BAE could move faster but would need to make some investment in machinery and assembly line expansion.

The company is in discussions with the Army about ramping up to 16 to 18 vehicles per month and what it would take to meet that number, including training more employees. Sheehy also floated a further 18 to 22 vehicles per month, which would require “significant investment,” he said, including more robotic weld sites.

BAE is contracted to build a brigade set of AMPVs every year. The vehicle is currently taking part in its initial operational test event, which is slated to finish at the end of July, and recently completed a live fire test. Sheehy said he is “very confident” that the company would reach the Army’s first unit equipped deadline scheduled for the second quarter of FY23.

A Mass Communications Specialist in the Field -The Firearm Blog