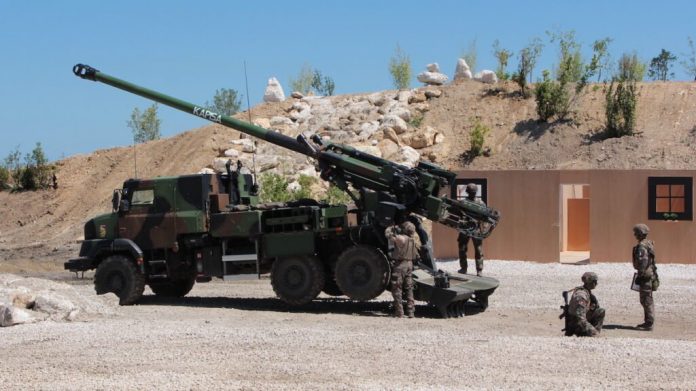 EUROSATORY 2022: Belgium and Lithuania have both fallen for Caesar’s charms, opting to buy the French-made truck-mounted 155mm artillery system for their armies, according to official statements issued by their respective governments.

The French Procurement Agency (DGA) on Monday formally ordered nine Caesar Mark IIs from defense firms Nexter and Arquus on behalf of Belgium, which had agreed to buy them in a government-to-government document signed on May 13, 2022 by Belgian Defense Minister Ludivine Dedonder and her French counterpart at the time Florence Parly (since replaced by Sebastian Lecornu).

The Belgian Army should receive its Caesars by 2027. The €62 million ($64.5 million) contract includes everything necessary to operate the guns and is another move into strengthening the interoperability between the Belgian and French armies.

Meanwhile Lithuania’s defense minister, Arvydas Anušauskas, signed a letter of intent on Monday with Lecornu to procure 18 Caesars for his own country and to join the development program of the new generation Caesar MkII.

The Caesars will go to the artillery battalion of Brigadier General Motiejus Pečiulionis and replace the 105m tower howitzer “which no longer meets the requirements of modern combat mobility and firepower,” the Lithuanian Defense Ministry said in a statement.

The Caesar MkII will be almost eight tons heavier than the current version, tipping the scales at about 25 tonnes (27.56 tons) largely because the truck cabin will be natively armored to level 2 STANAG instead of being protected with armored kits bolted onto the cabin if necessary.

NATO’s Level 2 STANAG provides protection to the occupants from a 7.62x39mm round fired from 30 meters away, from a 6 kg explosion mine under any wheel or truck or under the center, and from a 155 mm high explosive fired from 80m away.

As the 6×6 truck is heavier, its 215 Hp engine will be replaced with a much more powerful 460 HP engine. It will also have a new automatic gearbox and a new generation chassis.

The MkII will be delivered to France and Belgium from 2025 and to Lithuania from 2027, Olivier Fort, Nexter’s artillery marketing manager told Breaking Defense.