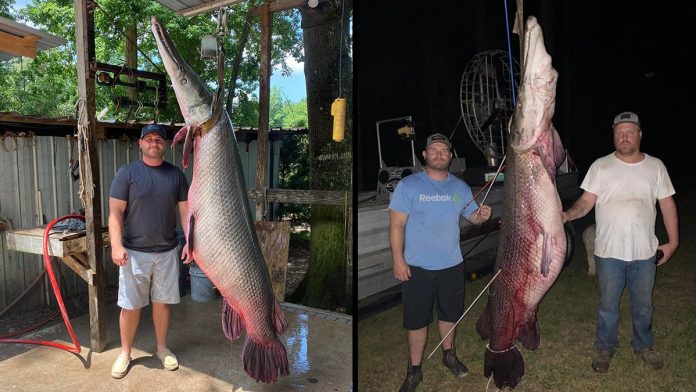 Two Texas bow fisherman boated a true giant last week. Jesse Fuller of Center, Texas, and Craig Peace of Deadwood, Texas were heading back to the boat ramp after a long night of bowfishing at Toldeo Bend Reservoir at 2 a.m. on June 9 when they caught a glimpse of a big alligator gar.

“It was pretty much a moment of shock with no time to even speak,” Fuller tells F&S. “In the game of bowfishing, most moments like this happen unexpectedly and in a hurry. We were trolling full speed ahead when all of a sudden we saw a dark body. We knew it was a big gator gar but had no clue it would turn out to be such a giant.”

In a matter of seconds, Fuller and Peace drew their bows and arrowed the fish. They both made solid contact with the gar—and the fight was on. The gar started ripping out line, and the duo had to fire up the fan of their boat to chase the fish. After about 30 minutes of this, the boat’s fan ran out of gas. They were able to refill it with fuel, but in the meantime, the gar snapped free of Fuller’s arrow, though Peace’s stayed embedded in the big fish. After chasing the fish again with the boat, Fuller sunk another arrow into it—immediately renewing the fight’s intensity. The fish broke Fuller off again. As Fuller tied on a third arrow, Peace was able to pull the fish to the surface and use a spare bow to sink another arrow in it.

“Now, we knew the fight was about over,” says Fuller. “Peace lifted her to the surface slowly using the line attached to the arrows. Meanwhile, I was at full draw with my bow. As soon as she came to the surface, I shot the 5th and final arrow, which ended the fight and instantly killed the fish.”

The bow fishermen put a rope around the huge gar and, after several tries, managed to heave it onto the boat. “Once she landed in the bottom of the boat, I realized we had landed the fish of a lifetime,” says Fuller. “I was basically speechless. It didn’t even seem real that we had been lucky enough to land a fish like that.”

They then took the fish to a certified scale. The gar weighed 276 pounds, besting the previous lake record, which was a 260-pounder caught in 2017. The gar measured 7 feet, 8 inches long, and it had a girth of 48 inches. After getting measurements on the fish, Fuller and Peace brought it to a taxidermist to get a full-body mount done.

Read Next: 10 of the Biggest World-Record Catfish of All Time

Alligator gar are considered the largest species of gar in the world. They’re found in slow-moving rivers, lakes, and estuaries along the Gulf of Mexico and in the Mississippi River Valley. They’re a long-lived species and, according to Texas Parks & Wildlife, a 7-foot gar is likely more than 40 years old. Fuller and Craig’s gar was not the only giant gar caught last week. Field & Stream also reported on a huge 7-plus-foot gar that was bowfished by Edgar Benitez at Falcon Lake on June 7.

What Actually Happens If You Take Fish Antibiotics

How to Maintain Bow Accuracy All Season Long