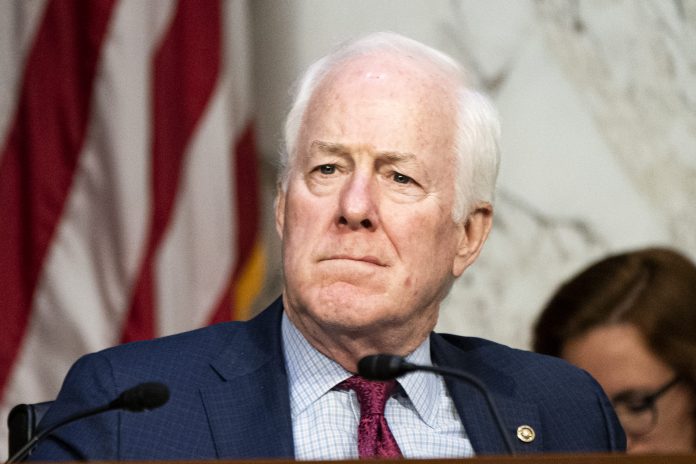 Following the weekend announcement of a compromise framework for a gun control deal in the Senate, Texas Senator John Cornyn apparently felt the need to address angry constituents who aren’t nearly as enthusiastic as he is about expanding “red flag” laws, enhancing background checks for those under 21 among other points in the deal.

Cornyn partnered with Democrat Chris Murphy of Connecticut to negotiate and broker the deal that got nine other Republicans to sign on, greatly increasing the chances of the final bill clearing the Senate once the legislation is actually written.

There’s only one big problem with Cornyn’s much-heralded achievement: his tweet proves that he wasn’t even trying to actually negotiate anything.

These are ideas we rejected in the bipartisan agreement on principles for gun-related legislation announced yesterday. Why? Because we knew that if they were included, the bill would not command the votes needed for passage. pic.twitter.com/dfrAWmYJM2

It’s pretty clear what his staffers (it’s doubtful he has the graphics skills or computer literacy to do that) were trying to do with yesterday’s tweet — damage control. By showing us all how the deal he struck with Democrats could have been so much worse, he’s trying to frame the agreement as a grand compromise that saved firearm owners from some of the worst that gun-grabbers had in mind.

The way Cornyn portrays it, if he and his fellow collaborators hadn’t rushed in to give some ground, we’d be facing magazine bans, “assault weapons” sales restrictions, waiting periods, safe storage mandates, and more if Democrats went ahead and scuttled the filibuster to force the House gun control bills through the Senate.

Then they could also pack the Supreme Court and we’d really be stuck, right?

I know the comments section is already filling up with “come and take it” and “shall not be infringed” declarations, but I want readers to notice something else — the things that aren’t on Cornyn’s list of rejected proposals that didn’t make it into the Senate deal.

Why doesn’t that list include anything from the Republican side? Why is there no plan for a federal law to allow armed teachers nationwide? Why wasn’t 50-state concealed carry reciprocity considered? How about deregulating suppressors or removing short-barreled rifles and shotguns from the NFA?

Surely if the Democrats really wanted “common sense gun control” as badly as they claim, they’d have stepped up and paid for it with some sort of compromise. Right?

Instead, what we’ve really learned from Cornyn’s sorry excuse at tamping down the blowback he’s undoubtedly getting is that he never really negotiated with Senate Democrats at all.

Cornyn and the other GOP collaborators who agreed to the framework showed up with no demands at all of their own. They were only prepared to haggle with Democrats over how much the rest of us will give up so he can become GOP leader in the Senate some day.

Senators like Cornyn and Romney didn’t give anything up in the Senate deal. They have security details, large houses in gated communities with armed patrols, and plenty of other measures to keep them and their families safe while the rest of us rubes have to fend for ourselves like nearly everyone else who has ever walked the earth.

Just as it’s awfully easy to spend other people’s money, Cornyn had no qualms about giving our rights away for his own political benefit. He never had any plan to actually negotiate for us, to get something in return in an actual compromise with Democrats. Instead, he got rolled and he couldn’t be happier about it.

Cornyn’s just another elitist who wants to see how we can better serve him. He won’t have to face Texas voters again for four more years, by which time he’s betting the folks back home will have mostly forgotten about this. Sadly, he’s probably right.

How Much Does Bad Software Cost DOD? Lawmakers Want to Know