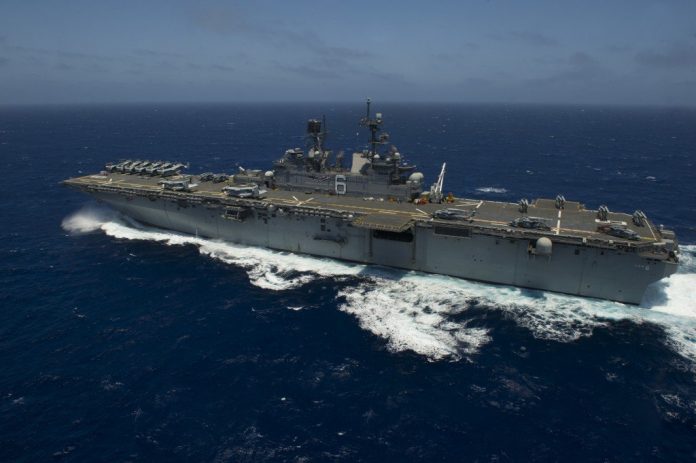 WASHINGTON: Following the publication of a watchdog report last week that revealed problems causing a year-long delay in an amphibious warship’s construction schedule, the Navy told Breaking Defense the issues have been largely addressed, including some not discussed in the watchdog’s report.

The Government Accountability Office in a June 8 report laid out some reasons why the construction schedule for the amphibious assault ship Bougainville (LHA-8) had been delayed by 13 months with a projected delivery now in February 2025, Breaking Defense reported, including defects found in the ship’s main reduction gear and under staffing problems for the program at shipbuilder HII’s facilities.

A Navy spokeswoman told Breaking Defense today that while the schedule remains delayed, the GAO report was based on now-outdated information and “several challenges” have been “realized and overcome.”

The fact the accommodations for the F-35 Joint Strike Fighter and COVID-19 working conditions also contributed to the delay were not cited in GAO’s report.

“The majority of the LHA-8 construction modules are now erected and both [main reduction gears] are now installed. Collaboration and detailed planning efforts have resulted in an updated delivery schedule that not only manages cost and schedule risks, but reflects a plan that will deliver the most capable LHA to date,” Koehler continued.

While GAO reports do provide information inside military programs not always disclosed publicly otherwise, they also usually lag behind several months between the time auditors interview service officials and the time their report is published.

“We will continue to execute the program plan that was developed to mitigate the risks associated with the integration of these additional capabilities,” LHA-8 prime contractor HII spokeswoman told Breaking Defense today. “Ingalls will also strive to continually provide insight into the most affordable and least impactful way to accomplish the overall objective of delivering relevant capabilities in the ships we deliver.”

The America-class ships replace the retired LHA-1 Tarawa-class vessels and are capable of transporting 1,350 Marines and their equipment to hostile shores.

After Moscow blamed for explosions in Poland, all eyes on NATO