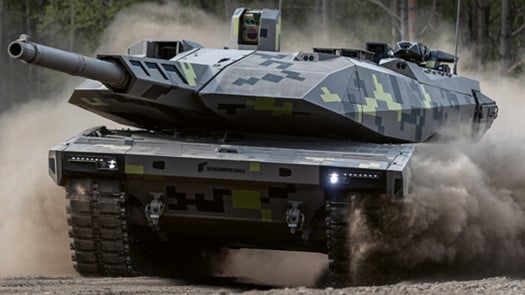 EUROSATORY 2022: It’s not often that a new tank, with tracks and all, appears on the market. Hence, Rheinmetall’s unveiling of the KF51 Panther on the first day of the Eurosatory show in Paris was quite an event.

The German company said the Panther KF51 (KF is short for Kettenfahrzeug, or tracked vehicle;  the number indicates it falls into the 50-ton plus class) “is destined to be a game changer on the battlefields of the future.” It sets “new standards” in “lethality, protection, reconnaissance, networking and mobility,” the company boasted in a statement.

Jan-Phillipp Weisswange, Rheinmetall’s assistant head of public relations, told Breaking Defense that the vehicle was designed on the company’s own funds and not in response to a client’s request. Weisswange said the tank was not designed as a candidate for the Franco-German Main Ground Combat System (MGCS) project, launched in 2012 to replace the Leopard 2 and Leclerc main battle tanks, but rather for an export market.

Still, those two systems could provide a sense of where Rheinmetall could target potential sales. Users of the Leopard 2 are Austria, Canada, Chile, Denmark, Finland, Greece, Hungary, Indonesia, Netherlands, Norway, Poland, Portugal, Qatar, Singapore, Spain, Sweden, Switzerland, Turkey, while the Leclerc is used by Jordan and the UAE.

The Panther’s chassis uses components of the Leopard 2 hull, but the turret is entirely new. According to the company, the 59-ton vehicle has a maximum operating range of about 500 kms (310 miles).

The main armament is the Rheinmetall 130mm cannon, designed for the MGCS project’s Future Gun System (FGS). The FGS is automatically loaded from two revolver-type magazines which each hold 10 rounds of insensitive munition-compliant ammunition. According to the company, the FGS “enables a 50% longer kill range to be achieved [than 120mm] with an unrivalled rate of fire due to the autoloader performance.” It can fire kinetic energy rounds as well as programable airburst ammunition and practice rounds.

This weapon is complemented by a 12.7mm co-axial machine gun instead of the 7.62mm co-axial gun which equips most main battle tanks today. At the rear of the turret roof is the company’s new “Natter” 7.62mm Remotely Controlled Weapon Station.

The guns are all controlled electronically and the computerized fire control system includes stabilized day/night sights for the commander and the gunner. Laser rangefinders give the Panther hunter/killer capability.

For self-protection, the Panther has a three-layer system: an active layer to protect from anti-tank missiles and kinetic energy threats; a reactive layer to neutralize double shaped charge rounds that may get through; and finally a passive layer to stop any remaining elements. There is also a top attack protection system.

The tank has been designed to be operated by three people. The commander and the gunner are in the turret while the pilot is in the chassis. An additional space is available in the chassis as a command post or for a drone operator or wingman pilot. The crew members can all operate the sensors and weapons as each operator station can take over the tasks and roles from others while retaining full functionality. Given that the turret and weapons can be controlled from the operator stations in the chassis, this opens the opportunity for future variants of the Panther with unmanned turrets — or, even a version that will be completely remotely-controlled.

In fact, the Panther is likely to change its spots quite a bit as it moves forward. Rheinmetall made a point of saying it wants operators, maintainers, logisticians and procurement professionals “of all current and future user nations to play an active role in shaping the vehicle’s future.”