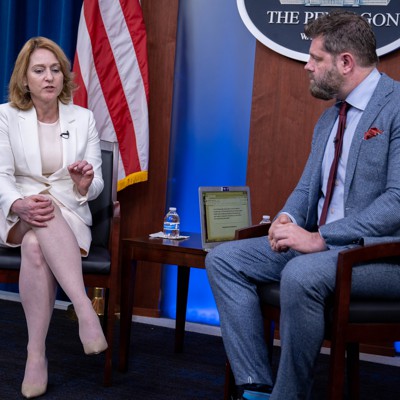 U.S. defense leaders believe Ukraine will survive Russia’s invasion and are already planning on how to arm the country for the long-term, said the Pentagon’s No. 2 civilian official.

“I think what we can assure ourselves today is that there will be a country called Ukraine. It will be a sovereign country and that country will have a military that will need to defend it,” Deputy Defense Secretary Kathleen Hicks said Monday. “And so as we look ahead, we’re thinking through what are the kinds of capabilities that the Ukrainians need to protect themselves over the long term.”

Facing the challenge of supporting Ukraine, modernizing the U.S. military to deter China and doing so in the midst of rising inflation and a possible recession, the Pentagon’s No. 2 civilian leader laid out how the Defense Department is attempting to tackle multiple unprecedented challenges at once, in an exclusive interview during the 7th annual Defense One Tech Summit.

The United States announced two weeks ago that it would begin sending long-range artillery systems, helicopters, and other additional heavy weapons to Ukraine as part of a new $700 million arms package. But, said Hicks, the department is also trying to take a longer-term approach to supporting Ukraine, five, 10, and 20 years into the future.

“We’re certainly thinking through the pieces that go into that with all the lessons we have developing out and aiding, advising and assisting… a partner nation, in this case Ukraine. I do think we are well equipped to do that. So are many of our allies and friends, and we’re working together now to decide what’s the best pathway forward.” She said continued support would go beyond just arms. “​​We’re trying to think through the kinds of both equipment but also the any kind of longer term training and defense establishment efforts that they will need.”

Ukraine’s Olga Stefanishyna, deputy prime minister for European and Euro-Atlantic integration, told Defense One two weeks ago that those needs included more long-range fires and other equipment and weapons systems, like drones. Perhaps most important, she said, is that there’s a logistics system and a plan in place to make sure the West can continue to supply Ukraine promptly for the foreseeable future.

“There are priority weapons we need, but even more important is to have the continuous, coordinated and timely … delivery,” she said during the GLOBSEC Bratislava Forum in Slovakia “If there is a gap between political agreement and actual implementation, the support comes as a gift that is not acceptable in times of war.”

Hicks is also charged with helping the Pentagon to modernize in the midst of major economic headwinds. She said that, so far, record inflation numbers have not yet shown a “substantial” effect on the Pentagon’s “buying power” but she’s watching how it might affect the timing and schedule of acquisition programs and projects.

“I do anticipate we’ll see them in the longer term,” she said. “Schedule is one of those things I’m really paying attention to—to start to see if we have—where we have many firm-fixed-price contracts, for example, where it may not be that we see a price increase because it’s a firm fixed price contract, but we might see schedule slips, and that could be supply chain, it could be workforce related, etc…”

The 5 Best Chicken Breeds for Your Homestead

As Enterprise’s keel is laid, Navy and industry advocate for another aircraft carrier ‘block buy’