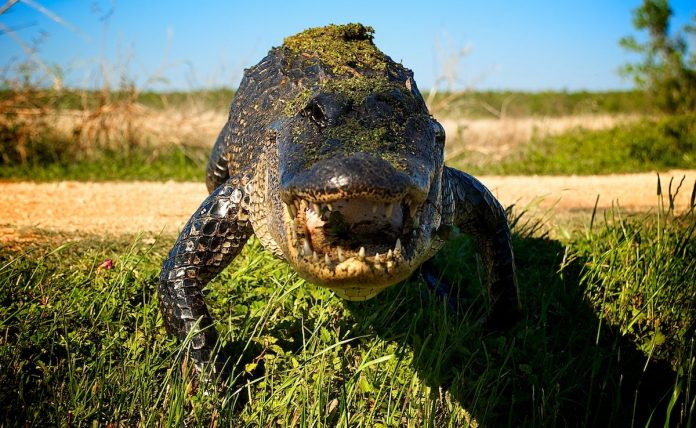 You may think you’re too smart to mistake an alligator for a dog, but have you ever been tested? Take this example. It’s a warm June night at the Mineral Springs Motel in North Springs, FL, smack dab on the Tamiami Trail. The live-in maintenance man, 49-year-old Ra Schott, is quietly smoking in the courtyard of the motel after midnight. Down the shell path, he sees what looks like a dog on a long leash emerging from the nearby bushes.

What would you do? Run in terror? Not Mr. Schott. He just kept on smoking. Except—and this is the thing—it wasn’t a dog. It was a 7-foot-1-inch-long gator coming down the path. You want to get out of the way of a gator on a path. It’s just what you do. “When it’s a dog, it’s not as scary as when you find out it’s a gator,” explained a witness named Will, who was staying at the motel. Great observation, Will.

Unfortunately, by the time Mr. Schott realized it was a gator, it was too late. The Sarasota County Sheriff’s Office says the gator bit the man’s right leg, held on and began pulling apart his leg muscles until it ripped a chunk of tissue off. A deputy sheriff nearby on another call was summoned. According to Will, “This sergeant, he jumped in the middle of the back of that gator, folded him up, and taped him up into a ball.”

Several news organizations covering the story have reported that the alligator was then “relocated.” But, according to the website of Florida Fish and Wildlife, Florida does not relocate nuisance gators back into the wild. This is because there are already 1.3 million gators in 67 counties of Florida. There are no “less-populated” areas for alligators. Everywhere that a gator can live, a gator does live. There are that many gators.

Read Next: Alligator Attacks and Kills Man Looking for Frisbees in Florida Lake

Besides, a healthy population of alligators often does not take kindly to the sudden introduction of another gator. It could be unsafe for that nuisance gator. That’s why this nuisance gator was relocated to Townsend Farms—which is an alligator processor.

Gun Meme of the Day: Yeah, That’s How it Works Edition