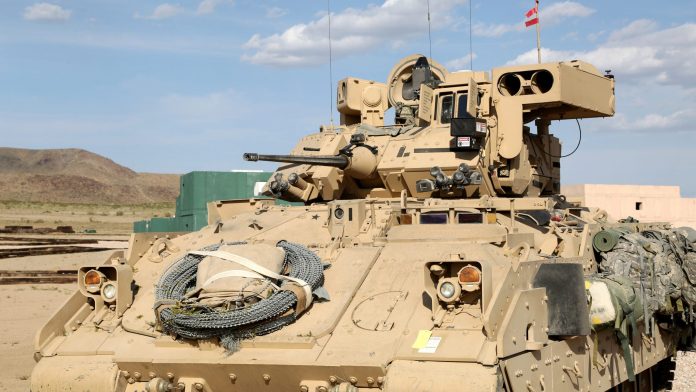 EUROSATORY: The US Army’s “highest level” requirements for the next two phases of the Optionally Manned Fighting Vehicle is for a tracked, medium-weight platform, a top general said, as the service looks to choose up to three vendors to move forward.

However, Brig. Gen. Glenn Dean, program executive officer for ground combat systems, stressed that the requirements listed in forthcoming requests for proposals (RFPs) for the next two phases of OMFV are not “final requirements,” continuing to allow industry flexibility to innovate.

“As we continue through detailed design, industry is going to provide their thoughts,” Dean said, speaking at Eurosatory in Paris.

By the end of the month, the Army plans to release the RFPs for phases three (detailed design phase) and four (prototype build/test) of its competition. The service plans to award contracts to “up to” three vendors for the next phases. Contracts will be awarded in the second quarter of FY23.

The OMFV is the Army’s future infantry fighting vehicle that will replace the Bradley, which has been in Army formations since the 1980s.

The Army plans to hold a “full and open” competition for the next two phases, meaning the five companies that have participated in the initial phases of the OMFV contest may not be the only bidders. The current competitors for the OMFV program are BAE Systems, American Rheinmetall, General Dynamics Land Systems (GDLS), Oshkosh Defense and Point Blank Enterprises.

All the vendors’ offerings have included hybrid-electric drive, Dean said. He added that all the offerings from vendors so far are shaping potential requirements.

“Each one of them has something unique they’re bring[ing] that we’re evaluating and trying to assess whether that’s something that ultimately might need to be a general requirement,” Dean said.

Other top level requirements, Dean said, is that the vehicle have a medium caliber cannon, with a minimum .30 caliber cannon, though the acquisition objective is .50 caliber cannon. The service is also weighing anti-tank guide missile systems for the platforms, though “we haven’t specified which missile,” Dean said.

Dean said the vehicle includes a two-person crew with six dismounted infantry in the back, down from a three-person crew in the Bradley. Dean said that decision will come with some cultural adjustments for soldiers, who will say they need a third crewman, but highlights the need to implement tools on the OMFV that will reduce the cognitive burden on soldiers. While fighter jets have evolved to give pilots more situational awareness and fly-by-wire capabilities that ease the burden on soldiers, combat vehicles have not, he said.

“We haven’t evolved,” Dean said. So that’s the opportunity for the future because without that evolution, again in the future space, as we’re seeing in Ukraine, is very complex.

To address the change, the OMFV will maintain a third crew station to ease the transition from a three soldier crew to two.

“That’s how we’re going to balance in the transition toward the application of greater autonomy on the platform,” Dean said. “Two crew is challenging today. I don’t have all the apps I need loaded to handle my data.”

Ever Wondered What It’s Like Driving an Armored Car?