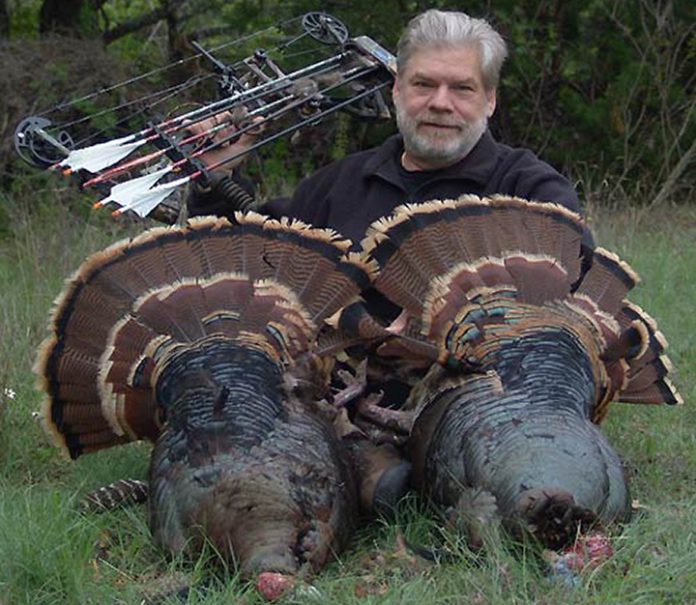 Getting a grand slam of Wild turkeys is tagging one of all 4 species in the US. That’s one each of the Eastern, Osceola, Rio Grande and Merriam’s gobblers. Doing it with a bow is challenging. And getting it done in one year is an even bigger deal. That was the challenge given to me by Robert Hoague. I was all for it.

Of course it all starts with Florida. If you don’t get an Osceola in Florida it just won’t happen, because unlike the other wild turkey species species there are no other states or seasons where you can hunt Osceola’s. Our plans were made, we planned on hunting the second season in Florida. It opens first in south Florida. Our airline tickets were bought, car rented and I bought my 10 day non-resident hunting license and turkey permit online.

Two weeks later Robert met me at the Tampa airport and we drove to Zolfo Springs, Florida to hunt with David Mills and Sean Kelleher. Bowhunting wild turkeys, being what it is, is never a slam dunk deal. And I muffed my first close encounter. Robert and I were videoing. I set the blind up close to the decoys, too close. The gobbler came running in from my left but I didn’t see him until he was dead on the decoys, only four steps from the blind.

This was my first hunt of the year and I had been too sloppy with my setup. The Double Bull blind shooting window was opened too far. When I began my draw the gobbler immediately spooked. It scurried off and got behind some orange trees and never offered a shot. I was disappointed, however, I had plenty of days left to get the job done.

The next day Robert filmed as I called two longbeards across the neighbors adjacent pasture. That land belongs to another outfitter and he had hunters out that morning. My calling also attracted two hens from our side of the fence. They walked to my decoys. The two gobblers stayed on the neighbor’s side and walked parallel with the fence past my blind and decoys.
They offered a shot but I needed them on my side of the fence. When they crossed over they were two orange tree rows away and the trees prevented a shot.

One gobbler strutting and put on a show. I could only watch as they followed the two hens into the orange grove. My gobbler action was over for the morning.

After the hunt I took a picture (below) of the wing drag marks the strutting tom left in the sand. It was a very exciting mornings’ hunt Robert captured on video. 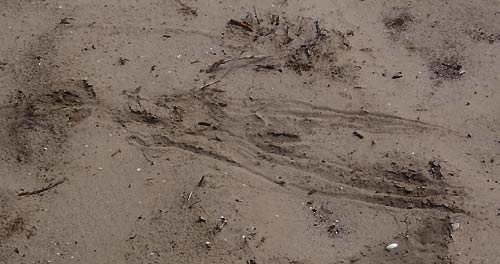 Strut marks made in the Florida sand by the Osceola gobbler.

Things turned quiet the next few days. Our guide David Mills took us to a new spot.That evening I killed my first wild turkey of the year, a really nice Osceola longbeard. 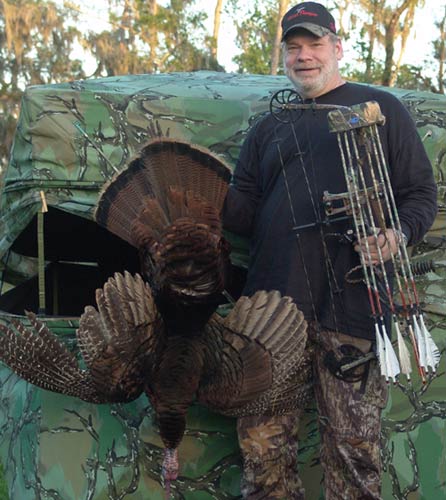 Fred shows us his first bow kill of our Spring season, a Florida Osceola longbeard.

David Mills captured the kill on video. I was elated but our time in Florida had run out. We had a two day drive to Nebraska for our next hunt and we needed to hit the road.

This Nebraska hunt was short and sweet. In three days I bow-killed two Merriam’s and an Eastern. All three were long beards. Robert killed an Eastern and a Merriams. We captured two of the hunts on video. 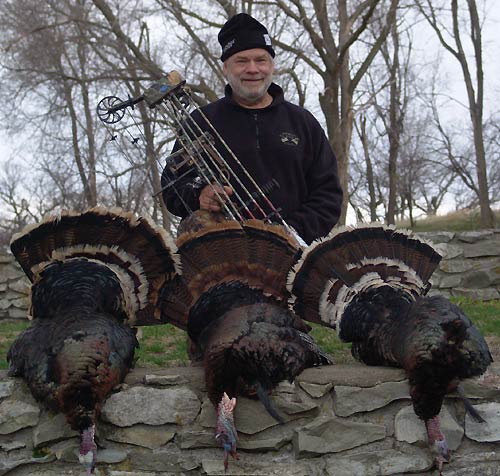 Fred Lutger with two Merriam’s and one Eastern longbeards.

To complete my grand slam I only needed a Rio Grande gobbler. The first morning we were into the action.But again as bowhunting wild turkeys goes, I just didn’t ‘get-er-done.’ We then hunted with our good friend Rick Philippi on his property in north Texas. Robert spent the next three days with me trying to video the final of my grand slam. Even though we saw several gobblers it just didn’t come together. We headed south to Robert’s home.

I am familiar with Robert’s property and hunted a few spots where I had luck in previous years. But now a cold front blew into the area and turned it into a ‘turkey grave yard,’ a phrase I heard David Mills use in Florida when we didn’t hear or see a wild turkey. Do to freezing weather, snow and sleet, the river flooding the week before, food changes and whatever else, the wild turkeys didn’t seem to be on the property. I only heard faint gobbling one morning far from Robert’s property.

That evening I asked about our mutual friend Jim Mitchell. Robert’s eyes lit up and he pulled out his phone. Robert told Jim of our no-bird situation. Jim said he hadn’t seen any gobblers on his place since the weather turned so cold and rain/snow/sleet all week. But Jim said to come on and give it a try.

We arrived late. Robert dropped me off and returned home to finish up some work. Jim took me to a creek bottom the turkeys use as a roosting area. He helped me get set up for the next morning’s hunt. Jim even got up the next morning and drove me down close to the roost area with his electric mule.

That morning proved to be one of the most exciting hunts of my life as I bow bagged a Rio Grande double. I had my video camera mounted on a tripod and captured both kills on film. After I recovered the gobblers I walked back to Jim’s house and related my good fortune. We got on the phone and called Robert and he drove over and took pictures of me with my two longbeard Toms. 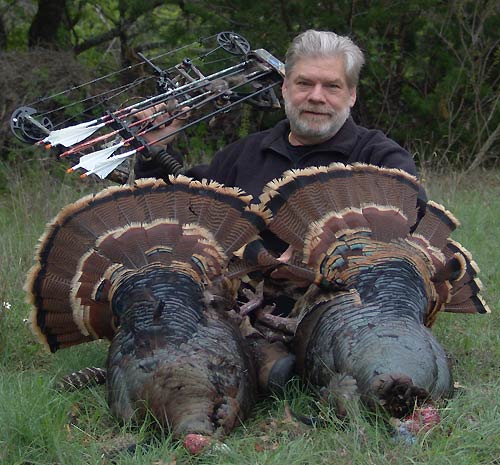 I completed my Wild Turkey Grand Slam. I decided to head home. I guide turkey hunters in Illinois and needed to get ready for that. Illinois season was opening in four days. I only got to hunt in Illinois for three days but didn’t score. I had action but didn’t draw my bow.

This is Wild Turkey Grand Slam thing is only a fun challenge that makes a great excuse to spend more time turkey hunting. God willing, I’ll get a few more years in the wild turkey woods. It’s great to have a hunting partner like Robert. We are already kicking around ideas for future wild turkey bowhunts. And this year isn’t even over. Did someone say whitetail deer and black bear?