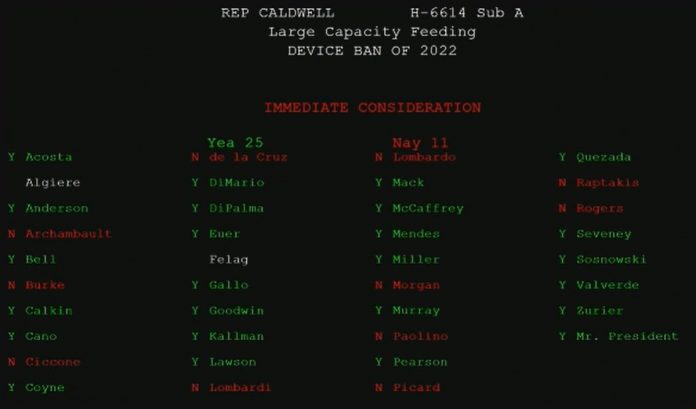 #BREAKING: The bill limiting firearms in Rhode Island to 10 rounds per magazine has passed the Senate Floor.

The gallery was cleared after outbursts following the vote. @ABC6 pic.twitter.com/zSrjs9l723

The Rhode Island government is poised to infringe on the 2A rights of its citizens, including a confiscatory ban on magazines and purchase restrictions for adults under 21.

Per The Providence Journal, the state Senate Tuesday night approved legislation that would:

There will be no “grandfather clause” for magazines that hold more than 10 rounds.

Gun owners currently in possession of “large capacity feeding devices” will have 180 days to turn them over to police, sell or transfer them to individuals in other states where they are legal, or permanently modify them to only accept 10 rounds.

“Critics will claim that no law can prevent the horrific mass killing we’ve seen in Buffalo, Uvalde, and so many other places. But the reality is that we can take meaningful action to reduce the risk of such a tragedy here in our state,” said Sen. Cynthia Coyne in a speech before the Senate.

THEY DID IT!!! Late last night, three bills supported by Rhode Island @MomsDemand volunteers – a ban on high capacity magazines, a ban on the open carry of loaded long guns, and raising the age to buy a long gun from 18 to 21 – passed the House of Representatives. #RIPolitics https://t.co/2Moh4OHUCJ

“Large-capacity magazines enable killing on a massive scale. That is their sole purpose. As such, they have no place on our streets and in our society,” added Coyne, a retired Rhode Island State Police trooper.

Initially, the sweeping mag ban stalled in the Senate Judiciary Committee with a 6-6 tie vote.

However, Senate Majority Leader Michael McCaffrey (D-29) forced the measure through via an “immediate consideration” procedure that fast-tracked it to the floor for a vote before the entire chamber, according to WLNE.

Rhode Island Senate passes 10-round magazine ban bill with no grandfathering, sending it to the governor: pic.twitter.com/kMMvGSjsJz

All three bills will now head to the desk of Rhode Island Gov. Dan McKee, a Democrat.

Gov. McKee has not yet indicated whether he plans to sign them into law but based on his political affiliation, it doesn’t look good for gun owners.

When To Trust Your Carry Gun -The Firearm Blog

A Musk monopoly? For now, Ukraine has few options outside Starlink for battlefield satcoms