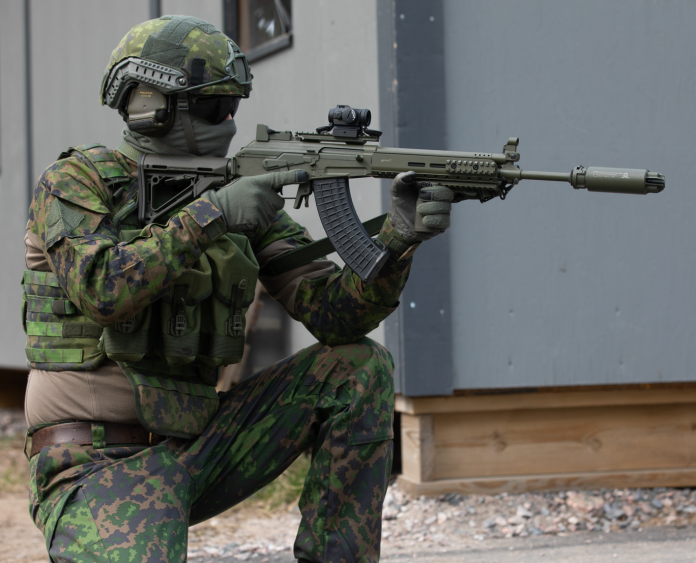 The hungriest beast of them all on this blog is our Photo Of The Day. It consumes hundreds of images every month, and it has been doing so for over 8 years. In a series of articles, we’ll be going through some of the firearms used by the Finnish Army. We’re going to begin with their Assault Rifle RK 62M.

Here’s what The Finnish Defence Forces have to say about the RK 62M:

The assault rifle is the standard weapon of the infantry and the personal weapon of all soldiers in the Finnish Defence Forces. It is a gas-operated, rotating bolt weapon, capable of semi-automatic or full-automatic fire.

The assault rifle is an effective firearm for ranges up to 300 m. The round also easily penetrates body armour meant to protect against shrapnel, and composite helmets. The round is not, however, armour penetrating as such.

The usability of the Finnish RK62s manufactured by Valmet and Sako has been improved by modernising them in the late 2010s. The updated assault rifles are in conscript-training use in all the Defence Forces’ brigade-level units.

The modernization started in 2011 in the Guard Jaeger Regiment, and different versions of the weapon were tested in different Army units and in the Air Force. Millog was hired as the company to carry out the assault rifle modernization.

The goal of the modernization was to improve the usability and extend the life-cycle of the assault rifle. The central improvements include an adjustable buttstock and compatibility with the soldier’s kit and a modern rail system for mounting optics and accessories.

With the modernization, the Finnish Defence Forces has been able to cost-effectively improve the effect of infantry fire, thanks to improved ergonomics, faster opening of fire and accessory mounts.

In the modernisation, the modernized RK62 assault rifles bearing mode designations M1, M2  and M2  have had a telescopic stock installed, as well as a new safety selector, rails for optical sights, and a tactical sling. Additionally, the M2 and M3 models also have a new handguard and a flash suppressor. All of the weapons will be equipped with optical sights.

The differences between M1, M2 and M3 are the following:

The M1 is the primary model, and it is intended for front-line infantry use.  It has a telescopic stock, a new selector switch, optical sight mount and an adapter for mounting accessories as well as a tactical sling.

The M2 is optimised for fighting in built-up areas. It is equipped with a new flash suppressor and a handguard that enables the mounting of accessories. It is possible to attach a silencer to the new flash suppressor or a breaching tool, for example, to cut reinforcement steel by shooting at it. Accessories can be mounted on the handguard based on user needs. Just like the M1, it has a telescopic stock, a new selector switch, optical sight mount and an adapter for mounting accessories as well as a tactical sling. Another possible accessory is a fore grip.

The M3 continues the development of the RK62M, particularly in terms of the weapon’s coating and colour. The weapon is otherwise like the M2, but it has a green experimental coating. The weapon is equipped with a silencer (suppressor) and a breaching tool. The Finnish RK 62M. Are you familiar with this type of charging? On June 13, 1777, Marquis de Lafayette landed in the United States.

Stupid Is As Stupid Does: NY Leaders Want to Mandate Microstamping In Response to Tragedy