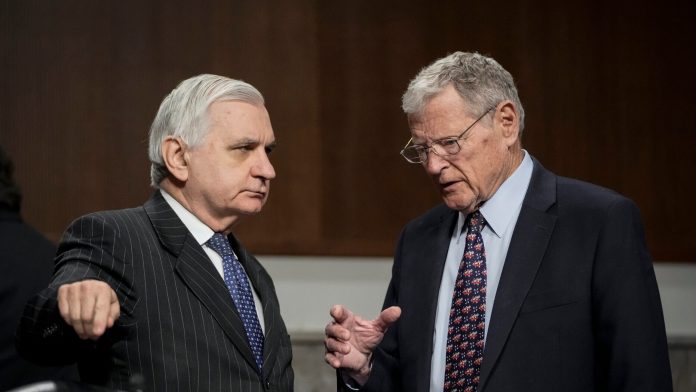 WASHINGTON: The Senate Armed Services Committee wants to increase national security spending by some $45 billion over what the Biden administration has requested, bringing the total price tag for its proposed National Defense Authorization Act up to $847 billion.

The topline jump, senior lawmakers said, was to account for inflation, security assistance to Ukraine and to help replenish stockpiles of American weapons, among other expenditures. It funds a number of programs from the armed services’ unfunded priorities list, but in a briefing with reporters, committee chairman Sen. Jack Reed, D-R.I., and ranking member Sen. Jim Inhofe, R-Okla., declined to go into details about what from those lists would receive funds.

The legislation “confronts China and Russia by fully investing the Pacific Deterrence Initiative, the European [Deterrence] Initiative and the Ukrainian security assistance initiative,” Reed said, adding that it authorizes $1 billion for the National Defense Stockpile. It also authorizes a 4.6% pay increase for servicemembers and Pentagon employees.

Key lawmakers have been signaling to expect a defense spending hike from almost the moment the department’s budget request was released in March — even though the Pentagon’s budget request was the highest in history. Whether the defense spending bill would jump as a result of inflation has been something of a political sticking point, with mostly Republican critics arguing national inflation had diminished the Pentagon’s buying power by the billions.

OP ED: How the Pentagon’s bad inflation math made a hollow budget

Inhofe suggested to reporters today he was optimistic the $45 billion increase would find support among his Republican colleagues, many of whom he said had input in the funding negotiations.

In his remarks, Inhofe, who is retiring and for whom this year’s bill is named, praised what he said was the bipartisan nature of the defense spending negotiations.

“So it’s something that’s done right, something has the support — has always had the support, historically — of all the members, and it’s surprising how non-partisan it has been in the past,” he said. “I’m not talking about just this year. This year yes, but also last year and the year before.”

Saudi naval modernization pushes ahead, with eye always on Iran

NATO Forges Plans to Surge Forces to Baltics In a Crisis