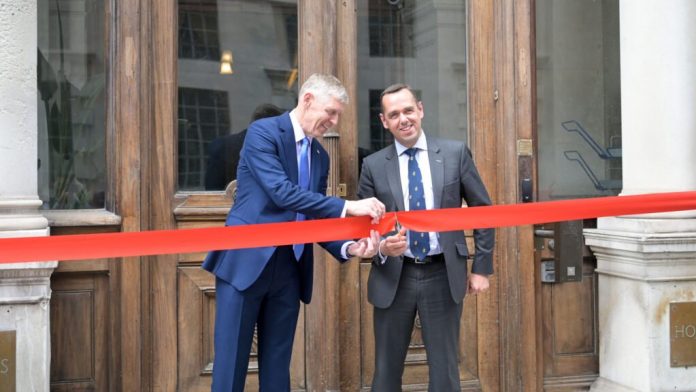 US and Royal Navy officials hold a ribbon cutting ceremony for a new “tech bridge” established in London on June 15, 2022. (Photo courtesy of Royal Navy.)

WASHINGTON: The US Navy and the United Kingdom’s Royal Navy have officially opened a joint London-based “tech bridge” to increase investment in new technologies for both countries.

“Being in London, right next to the strategic headquarters of our Armed Forces, and at the heart of this great global city, allows exposure not only to the latest thinking in defence innovation, but provides physical access to those varied organisations and individuals conducting some of the most exciting technological research and development anywhere in the world,” Rear Adm. James Parkin, a senior Royal Navy officer, said in a June 15 statement.

Also present at the ceremony was US Navy Rear Adm. Lorin Selby, chief of naval research. “The opening of the London Tech Bridge’s innovation hub represents a new way for great minds to come together in a unique atmosphere, share ideas and technologies, and foster more effective research collaboration,” he added.

The “tech bridge” concept, which essentially aims to ease the sharing of technologies between services, academia and industry, originated in the US Navy in 2019 when then-Navy acquisition executive Hondo Geurts established “NavalX.” That office, he said at the time, was designed to improve the Navy’s way of doing business by connecting people who would not usually talk to each other through the normal acquisition process.

Since then, the service has established more than a dozen NavalX offices around the US, and announced its intention to open an international office in London in 2020.

The new London location will host an in initial “Tea and Tech” event this month to kick “off a monthly session with industry in specified technology areas, allowing companies to pitch their ideas and technology,” according to a statement issued by the Royal Navy. Those technologies include AI and autonomy, directed energy and green energy, advanced manufacturing, maintenance and sustainment.

Ahdoot: To End Violence, We Just Need to End Poverty, Racism and Injustice