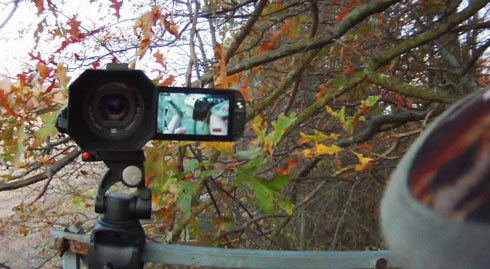 Fred Bear told us, “A hunt based only on trophies taken falls far short of what the ultimate goal should be . . . time to commune with your inner soul as you share the outdoors with the birds, animals, and fish that live there.”

With the increase of outdoor hunting TV shows during the past few years, many people have purchased professional quality cameras and begun capturing their hunts on film. My first camera was a Canon GL-2, which, for television broadcasting, has since become obsolete; just about everything today is in High Definition.

My husband captured my first archery hunt on the GL-2 and I have since been unable to find that footage. I think I taped over it, which really upsets me, because watching your hunt for the first time and being able to replay it is such an amazing experience. I can’t tell you how important it is to keep track of everything you film; once lost, it may be forever.

Whether filming a hunt for a segment on the Nature Productions family of TV shows or my own personal use, I want to make memories and share my hunts for years to come. Aside from the basics, such as getting completely familiar with your camera equipment and keeping the lens clean, here are a few things I’ve learned the hard way.

Roll with it
When filming your hunt or anything for that matter, do not erase or rewind if you mess up. By messing up, I mean if you stumble over words, say something completely stupid, or make a mistake; just keep rolling where you left off without backing up the tape or deleting the file. Leave everything you film alone, and edit all the unwanted footage out in the editing program later. The filming part doesn’t have to be perfect or planned out. Sometimes those candid shots are the best, and bloopers are fun to watch anyway. Whether you intend to on filming a professional quality hunt or just for fun, keep the camera rolling.

Start a collection
If recording to tape, don’t be cheap and reuse them. Just keep everything you shoot and start a tape collection. Label each tape after you’re done filming and editing and file it by date or subject. Unless you are very organized (unlike me) and can take the time to burn everything onto a DVD or some other form of storage, reused tapes will become a confused mess of which ones are OK to tape over and which aren’t. I stopped reusing tapes to save money after I couldn’t keep track anymore.

Make it interesting
Film as if you were telling a story to your buddy. It makes it more interesting to the viewer to see you get up and grab breakfast, drive to the hunt, play a practical joke, and film a shot of the hunter pulling the bow back (even before you actually see the game). Many TV shows do a lot of the preparation and even post filming, so that they can piece everything together for the final cut.

Try different vantage points, like filming low to the ground as the hunter walks to their tree stand. A great way to learn about interesting shots is to study your favorite TV shows or movies for different filming angles and techniques.

If you do any prep or post filming, make sure the lighting and conditions are similar, so it doesn’t look like two different places or two different weather or times of day. The industry calls this “B-roll.”

Get it all
Film as much as possible – remember, no matter what, keep that camera rolling. You’ll be happy to have that much more to edit with and piece your story together. Having too little footage will be disappointing when you need to add something to the final product.

If you’re really serious about putting together good hunting stories, you might want to capture your surroundings, such as close up of birds, trees, butterflies, and deer from another day when you’re not hunting, whatever you think might make good in-between shots for your hunt. You might call this your “stock footage.” When you watch any show, you will see a lot of these types of transition shots, and they help keep things moving.

Edit away
To make a good hunting video, you must have access to a video editing program. There are some out there that are very inexpensive and easy to learn. Most of these programs come with a tutorial or instruction manual. You don’t have to try to win an Oscar; you just need something that tells your story, even if it isn’t perfect. If you are going to share your video, the video editing program allows you to piece the different clips together to make an interesting story.

Tapes vs. memory cards
Typically, semi-professional video cameras use either 8 mm video tapes or a memory card, such as an SD card; I highly recommend the memory card for filming. To determine how big of an SD card you need, a 32GB SD card can film approximately 4 hours of footage at 1080p format. The 8mm tape is the mainstream media type, however, the tape cartridge is engaged when you turn the camera on, and this makes noise. It’s fairly loud when the woods are silent. A memory card has no moving parts to engage, and is very silent when turning on or off. Imagine turning the camcorder to standby moments before that monster buck begins to move broadside offering a shot and he hears the creak of the tape engaging and runs off. He may not hear your camera, but I wouldn’t want to risk that chance.

Choosing a camera
For sharing hunts with family and friends, or home viewing, I don’t think you need to spend a fortune on a video camera. I do recommend a High Definition camcorder and there are quite a few (brand new) for a couple hundred dollars that will make great home videos. HD is better than the picture quality on an older, analog device, which can be grainy, and you’ll notice this more now that many of us are used to watching movies and TV in HD and BluRay.

Something else to keep in mind is that right now almost all of those original 3ccd video cameras that the hunting shows were using are flooding eBay and reseller’s market, because of the television network’s required transition to HD. The 3ccd (charged-coupled device) camcorders basically take separate readings of red, green and blue color values for each pixel to achieve a much better picture than a single ccd camera. In layman’s terms, a 3ccd playback will be much clearer and has distinctively better quality picture. And if you do a little research, you can find a decent used 3ccd camcorder that captures beautiful video for around $500 or less.

Camera support
A good tripod is a must for steady shots in the field and for filming your “commentary,” in other words, the part of the video where you are summarizing the events of the hunt. For solid, ultra-smooth tripods, I recommend looking at the Vanguard line, especially their Alta+ and Tracker models with video pan heads.

Voiceover
Tell your story by filming yourself talk about the hunt. When editing the video, you can use the audio sound file on top of the video to tell the story as the viewers watch the action and then cut in and out of your filmed commentary. The filmed commentary may also be used to describe some of the events that were not captured on film and elaborate more on the details or background of your hunting story.

Good help is hard to find
The most difficult part of filming your hunts is finding a cameraman who will endure the long, cold and uneventful hours with you while you’re hunting and trying to make a good hunting video. You are fortunate if you have someone who doesn’t mind making you the center of attention. Most hunters would rather be hunting themselves than sitting out in the cold to film someone else.

It’s your show
Ultimately, the way you want to capture your hunts is entirely up to you. You may not want to edit the footage at all and are just as happy watching anything you captured on video! Either way, filming hunts has evolved into a challenging and fun hobby all on its own. I cannot tell you how very exciting it is to relive your hunt, and I highly recommend filming your hunt no matter what type of camera you have. The first time I watched one of my hunts on video was truly amazing. You can replay and review your shot placement, or, if something unexpected happens while you’re out in the woods, you can watch it again at home. It’s well worth the money and all the effort to capture and enjoy it for years to come!

For the highest quality products to help you do your best filming rely on: Vanguard World

The 20 Best Gifts at Cabela’s This Year