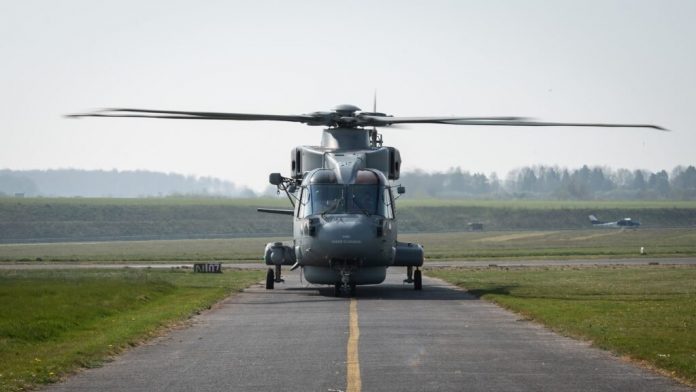 EUROSATORY 2022: NATO’s Next Generation Rotorcraft Capability (NGRC) project officially launched in Brussels today, with six European NATO states agreeing to allocate funds of €26.7m ($28.2m) to define their military’s requirements for a new medium multi-role helicopter to replace those currently in their inventories.

France, Germany, Greece, Italy and the United Kingdom had previously signed a letter of intent (LOI) in November 2020, but at today’s signing of the Memorandum of Understanding, the Netherlands joined the project. Spain and the US, which had earlier expressed interest, according to NATO, ultimately did not join up. The UK is the lead country for the project.

The goal is to replace the current generation of medium multi-role helicopters, such as the NH90 and the AW101 Merlin, by around 2035 which is when many of those currently operating will reach the end of their life cycle. While the agreement does not lock the countries into buying a final design together, all six NATO nations operating the same system would have obvious interoperability benefits and, at least on paper, should help keep costs down by buying in quantity.

The MOU signature “is a clear example of NATO and Allies working together to harness fast-changing technology for the benefit of our military capabilities. By investing our resources and channelling our development through a multinational framework, we are making sure Allies will be equipped with the best available equipment,” said NATO Deputy Secretary General Mircea Geoană in the statement.

“In cooperation with industry, the participants will start from a clean sheet to explore how to match their needs with the latest technology on the market, looking at options such as hybrid and electric propulsion, a systematic open system architecture and the delivery of radically improved flight characteristics,” reads a joint statement from the partners, who met in the margins of this week’s NATO Defense Ministerial meeting.

That language, especially the mention of a “clean sheet,” suggests that industry concerns expressed after the NGRC Industry Day held in Luxembourg last September have been heard — particularly European suspicions that the program was being steered towards picking an American system.

An industry insider who spoke on condition of anonymity told Breaking Defense at the Eurosatory show in Paris that during that meeting, companies expected to have discussions about what capabilities industry could potentially provide, only to be met with what appeared to be a set list of requirements.

“Somewhat to our surprise, instead of that, we were told what the characteristics of the new machine should be. Normally you first establish what the machine needs to be used for and then you talk about its characteristics,” the insider said.

The most important of these characteristics was that the helicopter should be very fast, with a top speed of around 220 knots (253 mph) — which would seem to narrow the field down to a tilt-rotor, hybrid system or some other kind of non-traditional helicopter design. A further requirement for the NGRC was that its range should be around 1,180 miles, twice that of today’s helicopters. Lastly, it needed to be cheap.

Of note, the US and British armies have agreed to pursue a “Future Vertical Lift Cooperative Program Feasibility Assessment” that provides the UK MoD with access to US Army requirements documents which could be used to inform their own decision-making processes. The fact the requirements of this UK-led NGRC program were so aligned with those of the US Army’s Future Vertical Lift Program led to suspicions amongst European industry that the NGRC requirements had been written so that the winner of FVL will, by default, end up as the winner of NGRC.

This did not sit well with the industrial representatives, who, according to the corporate insider, felt that the requirement of the US Army for speed and range, needed for operations in the Pacific flying between islands, is simply not necessary on the European theatre.

Airbus Helicopters, for example, recently calculated that in order to meet the speed requirements the helicopter would need to be about 30% bigger than the current generation used in Europe, with a maximum take-off weight of up to 17 tons “and that brings in its wake a host of issues, such as not being able to land on a ship” the industrial source said. He added that during a conference yesterday during Eurosatory about the NGRC “we told the armies and the ministries of defense that if they wanted speed, then that would have a financial and logistical cost and that therefore they might only be able to afford lower numbers of aircraft.”

Mention of a “clean sheet” in the statement was welcomed by an Airbus Helicopters spokesperson. The company, together with Italy’s Leonardo Helicopters, submitted in 2021 a proposal for a €40m ($42.2m) grant from the European Defense Fund for the Next Generation Rotorcraft Technologies (NGRT) project.

The spokesman said that this project would allow the companies to work on key technologies such as stealth and look at man/unmanned teaming, amongst other things — tech that would seem vital for the NGRC effort.

“There has to be a European proposal,” for replacing the current generation of European-made medium helicopters, the spokesman said.

US firms, of course, will be watching the program closely, even without official American government participation — and with the understanding that domestic production will be required in some capacity.

“We’ve been tracking that opportunity, and obviously one of the key aspects of that opportunity is going to be European manufacturing,” Mike Spencer, senior director for Boeing Vertical Sales, Business Development, told Breaking Defense.

“So there’s got to be some type of partnering strategy with one or multiple of the European manufacturers to move forward on that. They’re not quite as aggressive as the Army’s Future Vertical Lift requirements, but they do extend range and they are looking for additional speed. looking for additional seats. So, there are some design options that we will be exploring with our partners in Europe.”

Valerie Insinna in St. Louis contributed to this report.